In this week’s viewing: Premiere time is front-loaded with the big names, and they do deliver. 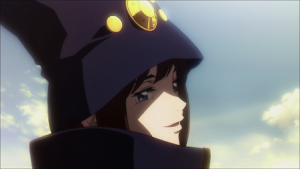 Boogiepop and Others premiere – The 2000 anime series Boogiepop Phantom is a cult classic among long-term fans, either as a masterful work of psychological horror or an artsy but confusing mess. It was a non-linear mashup of the light novels Boogiepop and Others and Boogiepop at Dawn, plus an anime-original story, told from the viewpoint of a different character every episode, telling the story of a monster, its defeat, and the aftereffects of how it was stopped.

This series is (so far) a straightforward adaptation of Boogiepop and Others, in which girls keep vanishing due to the mysterious monster. This means it is still non-linear, but taking a completely different path. By the time the one-hour premiere is over, the natures of both Boogiepop and the monster have already been explained, and we’ve seen the end of the story from the viewpoint of Boogiepop’s confidant.

People who were baffled by the 2000 adaptation… may not necessarily find this any easier to process. New viewers can rest assured that they need no background information, and those who don’t generally care for horror will find minimal gore. The pacing may feel uneven, as the first part is mostly talking and then the second one crams in a lot of plot. I did go ahead and watch that second episode, though, so we’ll call this a candidate for further blogging for now. 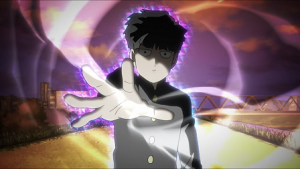 Mob Psycho 100 II premiere – Shigeo “Mob” Kageyama is a middle-school student with incredible psychic powers, surrounded by people who want to take advantage of them. His mentor Arataka Reigen is a complete fraud who uses Mob to cover up the fact. One of his classmates wants to set up an organized cult around him. And then there are the usual distractions of adolescence.

This premiere kicks off with a sketch of Mob and Reigen’s relationship for new viewers, as Mob has to help out with yet another exorcism that has gotten a little too real and, in the process, gains a disturbing new power. The rest reintroduces Mezato, the Bodybuilding Club, and Mob’s generally awkward school life.

The new season retains the unique look of the first, and though the overall story is more heartfelt, there are still a few chuckles along the way. The first season was one of my top picks of 2016, and I still strongly recommend it to anyone who has the time to go back and watch it— but if you don’t, you should still do fine starting here. 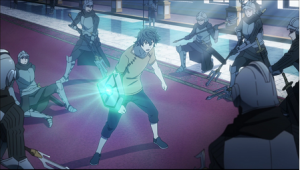 The Rising of the Shield Hero premiere – In a callback to the grandmother of all Japanese portal fantasies, Naofumi Iwatani is sucked into a magical world via a mysterious book to become one of its four heroes. After that, it’s strictly modern: he’s landed in an RPG-like world that very vaguely resembles medieval Europe, complete with status display in the corner of his eye telling him his abilities and experience points. Three heroes manifest with weapons, but Naofumi’s shield marks him out as the uncool one. No one wants to adventure with him except one woman, who then robs him blind and makes him a pariah with a false accusation of assault. Shunned by all, Naofumi swears to claw his way to herodom entirely by himself. Then Crunchyroll preview ends abruptly in the middle of a scene explaining how chattel slavery is a benevolent institution.

Light novel adaptations are infamous for heroes who are seen as losers by their societies, but whose abilities turn out to be ideal for whatever situation the author has set up for them. Even within its genre, The Rising of the Shield Hero stands out for the incredible level of insecurity of its hero and the fact that it doesn’t just provide him a chance for glory but an extended excuse to be a complete jerk to everyone. Right at the start, Naofumi is explaining how he’s a geek, but he’s not one of those geeks. He assesses women purely by their physical assets, wishes to possess them for himself, but at the same time both he and the author seem to despise all of them. As for the other male characters, they exist solely to justify Naofumi’s hatred of them.

Like last year’s Goblin Slayer, this show also suffers from trying to be very serious and dramatic in the middle of a setting full of lazy RPG tropes. If the misogyny and the slavery apologetics somehow don’t put you off, that should do it. 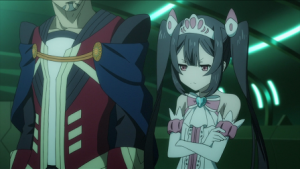 The Price of Smiles premiere – Yūki is a 12-year-old princess on a planet far away. Though the royal family plays a largely ceremonial role, as the only surviving member, she takes her job of keeping the populace’s spirits up seriously. What she hasn’t been told is that the border conflict which is seemingly on its way to being settled through negotiations has turned into a genuine shooting war…

While it focuses on the everyday life of a pampered princes, The Price of Smiles is signaling its intentions to burst her bubble. Not only is there a war on, the kingdom owes its existence to a native mineral which provides their energy, but which also somehow killed her parents. When she jumps in to help her longtime companion in a simulated mech duel, her willingness to casually destroy simulated skyscrapers looks like a setup for later decisions where she will have to confront real collateral damage.

This could easily descend into forced melodrama, but it’s doing well enough for now that I’d like to give it a chance. 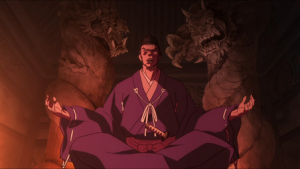 Dororo premiere – A lord has been losing his people to famine and plague, and he’s never going to become one of the big players in one of Japan’s more fractious eras if that keeps up, so he makes a bargain with demons: anything of his in return for success and power. When his first son is born without eyes, skin, or many other body parts, the lord is only happy that the demons have agreed to help him. But the Goddess of Mercy intervenes, the midwife does not drown the baby, and sixteen years later, with the help of a lot of prosthetics, the boy is killing demons and reclaiming his body piece by piece.

If you only knew of Osamu Tezuka as the guy behind Astro Boy, are you ever in for a surprise. Between the medieval setting, the body horror, and the mythological themes, not to mention art with almost no trace of Tezuka’s style, this is almost as far as you can get from his best-known work. (Though they do share one theme, the boy abandoned by a cruel father and rescued by an adoptive one.)

This first episode feels a little crowded, having to get most of the backstory in, introduce three more people who look like they’ll be important, and still have room for a big fight scene, but it’s certainly enough to leave you wanting more. The body horror is kept to the absolute minimum necessary, but squeamish viewers should be prepared to look away from the screen quickly a few times. The rest looks and sounds highly polished, and is worth a second look. 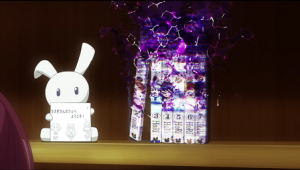 Pastel Memories premiere – Akihabara, once the beating heart of Tokyo’s geek culture, has fallen to mundanity. The staff of one last maid cafe takes pity on a young customer and teams up to find a manga that she once loved. But after searching their back room and every last remaining manga store, they’re still one volume short. Then, as an afterthought, the show reveals that all these girls are also superheroes who fight “viruses” that destroy popular fictional worlds.

The weird choice of pacing, where most of the episode is spent poking around boxes and shelves, is probably intended to leave space to assign character quirks to as many of the dozen girls as possible so you won’t forget who they all are by next week. So we have the catgirl, the upper-class snob, the enthusiastic one, the foreigner, and so forth. The pacing is still terrible.

Four good shows out of six to start the year with is pretty impressive, but most of those were expected to be good. There’s only one more big, high-expectations premiere to come (The Promised Neverland). But, let’s put those on the shelf for now and see how next week goes.