Dublin – Worldcon 2019 has announced the opening of the nomination period for the 2019 Hugo Awards, which will be honoring works published in 2018.

If you were a member of the 2018 Worldcon, or are currently a registered member of the 2019 Worldcon as of 12/31/18, you are eligible to nominate, and you should have received communications from the convention as to the procedures for doing so.

As it happens, the Experimenter Publishing Company, LLC, proud publishers of Amazing Stories and Amazing Stories Classics novels, anthologies and facsimile editions, have published a few works in the past year that are eligible for nomination in several different categories.

Two of our quarterly magazine issues were published in 2018. Sadly, the magazine itself is in a bit of qualification limbo:  we’re not a fanzine, we’re not strictly a semi-prozine and there’s no award for Best Professional Magazine anymore.

On the other hand, the daily website – www.AmazingStories.com – is eligibile for the Best Fanzine Category.

Which brings us to the works that we published in 2018.

The content of both our Fall and Winter issues is largely eligible in one of the three short length fiction categories (short story, novelette, novella) and the Professional Artist category for art.  Below, as a reminder, is a list of those individual works that were first published in 2018: 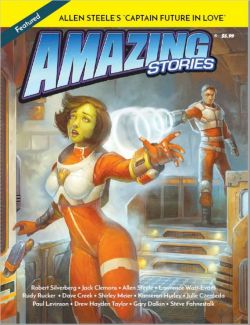 Flight of an Arrow, by Shirley Meier (Short Story) 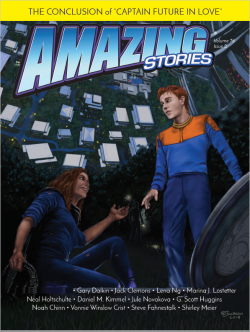 In the Republic of the Blind, by G. Scott Huggins (Short Story)

A Horse and Her Boy, by Vonnie Winslow Crist (Short Story)

For those keeping count:

We also ran non-fiction in the form of a Science Column by Jack Clemons, interviews by Gary Dalkins, Film Reviews by Steve Fahnestalk and writing tips by Julie Czerneda.  Those works may be eligible for the Best Related Work category

Poetry, which does not have a Hugo Award category but which is potentially eligible for other awards, also appeared:

And, of course, we had artwork.

*(our printing of the cover turned out overly dark, our fault, not the artist’s.)

Ira Nayman, our Editor-in-Chief, is eligibile for the Best Editor, Short Form category, though he will be chagrined when he discovers that I have mentioned this.

In whatever category they may be eligible in (Best Series?), we published, in partnership with Futures Past Editions, several more volumes of our annual anthology series, The Best of Amazing Stories: 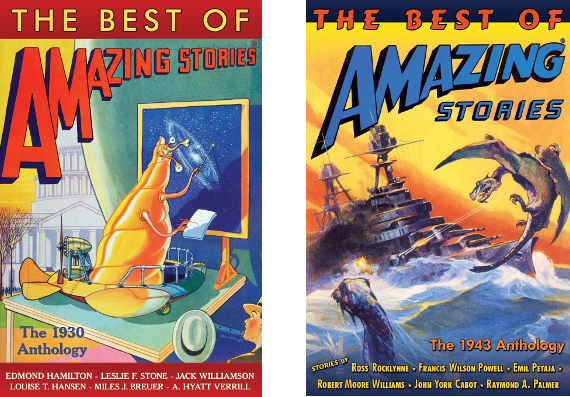 We hope you will give these works consideration as you go through your nominating process.  Good Luck to everyone!

And now, a few words on “eligibility posts”.

Way back in the opening years of this decade that is now entering its final year, I had my fannish sensibilities ruffled.  Authors and artists and others began discussing and then producing “eligibility”, “awareness” posts as the calendar began moving towards awards season.

Self-promotion for awards?  You just don’t do that in fandom.  Oh, sure, you may mention your hopes of getting nominated to your coterie of fannish friends, but publicly solicit support during nominations?*  Gad!

I was so convinced that this act was a slippery slope towards erosion of the Hugo Awards (and possibly other awards) that in addition to several blog posts on the subject (Crotchety Old Fan blog, now defunct) I privately wrote to several folks intimately involved with the award and voiced my concerns.  I strongly suggested that the awards were in danger of getting marginalized and that some other, more commercially oriented entity, willing to spend dollars on hype, would use the opportunity to offer a substitute, one that would be presented as a popularity contest and that the industry would lose out as a result.

My concerns, in a very broad way, outlined what has happened over the past several years.  The fact that the outcome was not as dire as I predicted it might be (the Hugo’s are stronger, the Dragons – popular award – have gained little meaningful traction and – side effect, Scientology’s The Writers of the Future award is coming under greater scrutiny and criticism) serves to show that Fandom has more resilience than I had credited it.  Thank Ghu, Roscoe, Foo, and all the other minor Ghods of Fandom.

The fact is, what those posts did was to identify the curb that marked the slippery slope’s boundary. Stepping up to the curb is a legitimate step.  Those who came after with ham-handed attempts to emulate with “voting slates” and curated recommendation lists were the ones who tripped over that curb.  And this, despite the fact that early proponents of eligibility posts went out of their way to identify the curb and to distinguish acceptable from unacceptable behaviors.

The need for such a distinction is evident in what has since transpired:  numerous websites that collate eligible works have been created; the reader’s packet of nominated works has been established (an outgrowth of this discussion, I believe) and, perhaps most importantly, a great deal of discussion has been had on exactly where that curb is.  Meanwhile, that distinction, the fact that it needed to be articulated and a firmer understanding of what is acceptable and what is not, while still not codified specifically in the rules, has been re-affirmed by Fandom itself, most notably in the sweep of No Awards handed out during the 2015 Hugo Awards, and, of course, in those rules changes that were implemented as a corrective measure.

Those who posted eligibility notices were not the problem.  Those who failed to understand the distinctions being made – either through lack of understanding or intentionally advancing their personal agendas at the expense of fandom, were.

It took me a while to get a handle on the fact that identifying the boundary markers is itself not the problem.  In fact, it’s a necessary component in establishing and reinforcing those unspoken community rules that underpin so much of what Fandom is all about.

And that is why, on our first opportunity to publish an eligibiity post, we are fine with doing so.

That, and one other thing:  we believe that one of the responsibilities of a publisher in this field is to actively support and promote the efforts of our contributors as best and as appropriately as possible.