SF Romance is getting it on, from NYT best selling authors to cover art that rivals the best deep space and spaceships artt 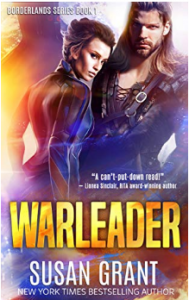 As we move further into December, the new releases keep coming.

New York Times and USA Today Best Selling author Susan Grant is well known in science fiction romance circles. She won the Romance Writers of America (RWA) RITA award for Contact, one of her earlier SFR novels and many readers credit her books with having sparked their interest in the genre. She’s a military veteran and  a commercial pilot who keeps her hand in on the writing. With Warleader (The Borderlands Book One), she’s taken an older title whose rights recently reverted to her from a publisher, and used the opportunity to substantially revise the manuscript. Early buzz from readers lucky enough to score Advanced Review Copies has been very positive.

#1: Enemies must not become lovers.

Welcome to the Borderlands, where rules are meant to be broken . . .

Admiral Brit Bandar is the Coalition’s greatest starship commander. The outlaw known as the Scourge of the Borderlands taunted her in a galactic game of cat and mouse for years, but she never caught him. Now they’re supposed to make peace and serve together on the same starship? Not so easy to do when your sworn enemy turns out to be the hottest piece you’ve ever seen.

Warleader Finn Rorkken doesn’t care how many medals “Stone-Heart” Bandar has. He’s going to show her what it’s like to be pursued and caught by a master. Intergalactic peace is on the line, and if she wants his obedience, she’ll have to pay his price. Challenge accepted, Admiral. 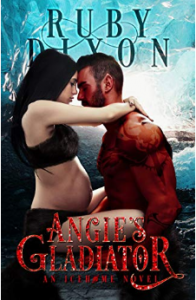 Perennial SFR powerhouse Ruby Dixon returns with Angie’s Gladiator (Icehome Book 5).Readers say they never get enough of her stories set on this icy planet. Clones and gladiators move this plot along: As an a’ani warrior, my life matters little. Cloned from the same matter as thousands of others, I am but one of many. Here on the ice planet, though, I can start over. I can become my own person, have my own needs, my own wants.

I know what I want. I have known since the moment I arrived.

Her name is Angie. She is human, with sad, lonely eyes and a very pregnant belly. To her, I am not just another clone. I am Vordis, the one who laughs at her jokes, tends to her needs, and makes her smile. I will do anything to make her mine.

But my brother and fellow clone Thrand thinks the same way, and he’s just as determined to win her. Will I have to destroy my bond with my brother to win my female? Or will he cause a rift between us that’s impossible to mend? 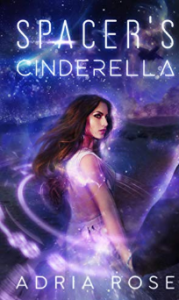 There’s nothing like a fairy tale reimagined and Spacer’s Cinderella by Adria Rose adds some science fiction details to the oft told story: A broken shoe. A forbidden ball. A sexy cyborg with a secret.

Born on an abandoned colony barely held together by sealant tape and hope, Aurora Sato is at the very bottom of the social pecking order. Hard work and brains got her into a coveted spot in the quadrant’s top university… But her new supervisor is a woman who’s not about to let an upstart like Aurora get anything close to a break.

And a break is exactly what Aurora needs right now. Her home colony is dying and nobody is in any rush to save it or her family. Aurora’s research project is their last hope, but only if she can complete it in time — an impossible task.

One night out is all she’ll allow herself. One night to forget her troubles. She never expects to meet a man who dazzles all her senses. Magnus Thorne is a battle-hardened, ruthless cyborg. Rich, respected and powerful, he’s too much for innocent Aurora. For one magical night he makes her feel like a princess, awakening a longing she doesn’t know how to quell.

But Aurora is in more danger than she realizes. And Magnus isn’t about to let her face it alone, no matter how hard she tries to shut him out.

He’s determined to break every rule to save her from ruin.  But will she trust him enough to let him? 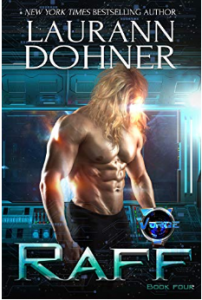 Laurann Dohner tells the next story in her Vorge Crew series, with Raff. I’ve been greatly enjoying this series, along with many of the author’s other avid readers. The ongoing action centers around a very unusual interstellar ambassador’s vessel and Raff is on my To Be read list. The plot: Lilly left Earth seeking adventure, and learning about aliens sounded cool. She just didn’t expect to meet any in person—until her ship is attacked by alien pirates. Now she’s meeting plenty of them. Scary ones who want to do very bad things to her.

Fighting for survival since childhood, Raff Vellar is more intimately familiar with knives and bloodshed than women. Then, during a trip to his home planet, a tiny human literally falls at his feet. When he learns she’s been forced into slavery, a fierce need to protect the human overcomes him. A feeling that quickly turns into a deep need to keep her forever. 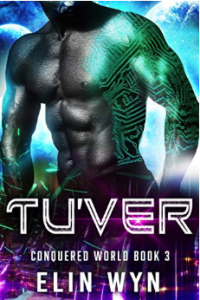 Elin Wynn sets up a poignant situation in her SFR novel Tu’ver (Conquered World Book 3). The blurb: When you know you’re going to die young, you can react in a few ways.

Or roll with the hand you’re dealt and enjoy what time you have.

Archivist Mariella thought all hope of a cure for her disease had been lost long before the Xathi invaded.

The war sped up her timeline, nothing more.

The warriors of the Vengeance? Friends only.

Tu’ver and the rest of the K’ver people esteem logic and order above all.

He has a function.

To fight with the crew of the Vengeance. To kill the Xathi. To avenge his people.

So why is he so drawn to the gentle human, Mariella?

And when there’s a chance to obtain information that may cure her, why would he risk everything to save her?

In the war between logic and passion, there can be only one victor. 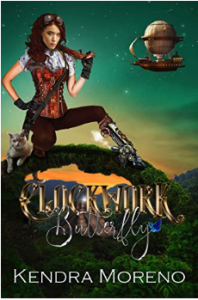 Always fun to find a steampunk story to mention here and The Clockwork Butterfly: A Steampunk Reverse Harem by Kendra Moreno is the one for this post. The plot: Victoria Greene would rather spend her time with machines than the high society she comes into contact with in London. She’s happy with her gears and cogs, even if that means she will end up a spinster.
When her father gets the funding for a trip to the Amazon to search for a mythical jewel, she jumps on the chance to come aboard as the Master Tinker. She expected to work on the massive boilers for the airship and to tinker with her mechanical creatures. She never expected the men suddenly thrown into her life making it even more interesting. The inventor, the cowboy, the scholar, and the dreamer are all intrigued by the woman who comes with grease on her face.

But something sinister is amiss aboard the airship and she’s determined to get to the bottom of it. Victoria’s suspicion rises the closer they get to Brazil and she must figure out the nefarious plans before it’s too late.
Can Victoria protect them all against the dangers, from onboard and the rainforest alike? Can such an eclectic team work together and find the Temple of the Rising Sun?
Let the adventure begin… 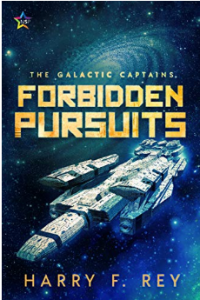 We’ll finish with Forbidden Pursuits (The Galactic Captains) by Harry F. Rey, which mixes interstellar space opera with romance. The plot: When Daeron’s mother, Captain Sanya, is offered a risky but lucrative job, rescuing an experimental galinium scientist from Aldegar, the lost loves lurking in her past mean she must send Daeron away to the other end of the galaxy—to the father he’s never met on the Kyleri Empire’s capital, Jiwani.

On Jiwani, the heir to the galaxy’s most powerful empire, Prince Osvai, balances deference to rigid Kyleri customs with his desire to explore the forbidden secrets of the Royal Baths, and the dark pursuits no prince should have.

But when a mysterious stranger from the Outer Verge turns up to work with his ambitious Uncle Viscamon, Osvai’s temptations lead him into a web of intrigue that could change the Galactic Balance forever.

As Sanya, Daeron, and Osvai pursue their forbidden desires, they become entwined in a galactic power struggle stretching from the frozen tundra of Jansen to the searing memories of Captain Ales’s lost homeworld, Teva.

They’ll soon discover all love has consequence, and the more forbidden the desires, the more deadly the pursuits.

That’s all the SFR hotness I have space to mention  for this week – happy reading!

Fill out your card! Win the satisfaction of finding some great SF Romance reads!

Steve really didn’t care for the new movie The Predator. Did you? On the other hand, Steve likes Stan Against Evil on IFC. Give it a try!

The Retro Look and Stranger Things