In this week’s viewing: Between bad weather and bad production decisions, it’s surprisingly difficult to wrap up the season! 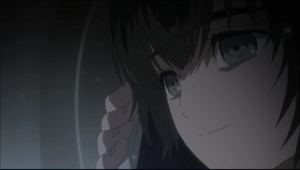 Steins;Gate 0 finale – It’s hard to say what exactly Steins;Gate 0 is to the original Steins;Gate. It’s not a proper sequel, since it doesn’t come afterward, but it does build on the existing structure. I think counterpoint may be the best word. That captures how it interacts with the first story and how it remixes and inverts it. Where Steins;Gate was about Okabe trying to solve everyone’s problems for them, Steins;Gate 0 is where they turn around and put him together after he breaks.

Making Mayuri the hero is its crowning moment of glory. The most apparently useless person in the original (though it was clear she grasped a lot more of what was going on than she got credit for), now she’s the one who takes on the suicidal mission to save the day, and is ultimately rewarded by being reunited with the man she loves.

There was probably some more business planned to sort out how everyone is returned to their proper place in the timeline before the show lost a week, but what is here is enough. This story is not absolutely essential viewing for fans of Steins;Gate, but it was not a mistake either. It still could have done without a few of the otaku-bait hijinks early on, but after the way it has stuck the landing, I’m willing to forgive a lot. 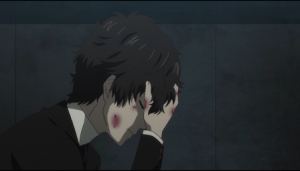 Persona5 the Animation finale(ish) – Yup, the mole is Akechi. But from the way everyone is glaring nervously at him, and the new flashbacks to Ren and Morgana talking it over, Ren figured it out. To execute his plan, he talks Sae into a favor: show Akechi his phone. This sets off a new chain of events where Akechi overpowers the guard, shoots Ren through the head, and… walks off as the final credits roll.

That is not, as it turns out, the end of the story. The real finale will be a movie released around the end of the year. Given that movies and specials almost never get international streaming deals, though, that’s as much as most of us will ever get to see.

This has otherwise been a reasonable midlist anime, which puts it easily in the top few percent of videogame adaptations. But it’s impossible to recommend without an actual ending. 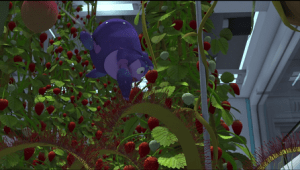 The Journey Home #12 – It always comes back to the bugs getting eaten, doesn’t it? This time the menace is electricity-generating plants, and a desperate move by Marbo brings us to a new iteration of the classic sf scene where the scientist narrates all the exciting ways available to be killed as his friend frantically tries to dodge them.

Master Wang is fine, except for the part where he and Midge have been jettisoned into deep space, and as philosophical as ever. Though relaxing and accepting fate for now actually sounds like good advice, since tardigrades are fine with hard vacuum and Midge could at least improve his chances if he could go back into hibernation and conserve oxygen.

With them tumbling into the infinite void and the others having to escape both mice and frogs to get back to the Stork, that’s where we have to leave things for now, and return after the season premieres.

The other shows we’ve been following this season have been delayed a week due to coverage of Typhoon Trami. I’ll talk about the finale of We Rent Tsukumogami next time, and pick Attack on Titan up again after the premieres as I would have done after this week’s episode anyway.

When Will We Have Artificial Intelligence As Smart as a Human? Here’s What Experts Think

The Adventure of the Dux Bellorum by Cynthia Ward: Book Review