The diversity of literature around the globe is truly amazing. Even more amazing is finding a wide-ranging collection from a talented cast of writers in a single volume. A must have for hardcore science fiction fans, Zion’s Fiction: A Treasury of Israeli Speculative Literature is a new anthology being released in late September 2018, from Mandel Vilar Press, edited by Sheldon Teitelbaum (Jerusalem Post) and noted translator Emanuel Lottem (Dune). 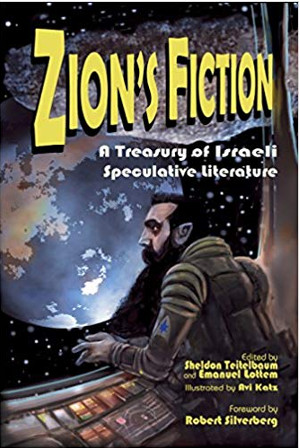 Billed as “the first English-language anthology of the best Israeli science fiction and fantasy, a portal into speculative literature from the ultimate ImagiNation,” this is more than just a collection from a specified group of writers. This is a compilation of good writing, pure and simple. Sure, there will always be a few misses scattered amongst the gems, but that is kinda expected when you pull together such a pool of varied ideas and talents and your target audience is just as diversified in interests and preferences.

What you can expect is a list that includes:

The Smell of Orange Groves by Lavie Tidhar

The Slows by Gail Hareven

The Perfect Girl by Guy Hasson

Hunter of Stars by Nava Semel

The Believers by Nir Yaniv

In the Mirror by Rotem Baruchin (Gay Ensemble, The Dreamers)

The Stern-Gerlach Mice by Mordechai Sasson

A Good Place for the Night by Savyon Liebrecht

Death in Jerusalem by Elana Gomel (A Tale of Three Cities)

My Crappy Autumn by Nitay Peretz

They Had to Move by Shimon Adaf (The Icarus Monologue)

Each entry is complimented by an illustration by award winning artist Avi Katz, whose work spans over 170 books in both Isreal and the United States and was previously featured in the Master of Science Fiction and Fantasy from Rockport Press.

Not all SF&F stories need to be about the unbelievable becoming believable and this wide assortment of stories touches on both the imaginable and unimaginable. Lavie Tidhar’s story (The Smell of Orange Groves) stands out as a thought-provoking examination of a narrator who is cognizant of changes in his life and his surrounding Tel Aviv world as past, present, and future weigh heavily on his conscious. On the other hand, Rotem Baruchin’s dark tale (In the Mirror) is a throwback to the Twilight Zone era with a sinister magic mirror that alters reality every time it is broken. And Gur Shomron’s modern take on the popular Young Adult adventures (Two Minutes Too Early) is sure to please the younger audience. Simply put, there’s plenty for everybody.

Zion’s Fiction: A Treasury of Israeli Speculative Literature is one of those anthologies where readers should be able to find at least one, but most likely, many stories they’ll want to reread over and over. Like most anthologies, this will open a gateway to some of the worlds most talented authors they may not have otherwise been exposed to, but more importantly, it will as entertain your imagination.