Black Chamber: A Novel of an Alternate World War by S.M. Stirling will take you back in history to a time that never was, but a time you won’t soon forget.

Sometimes, the past isn’t always as we know it. 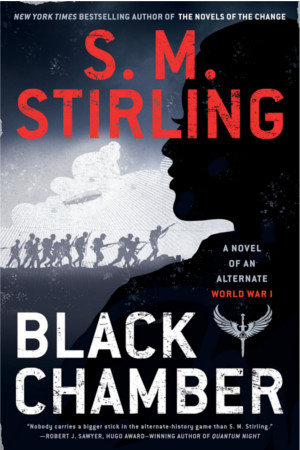 The book Black Chamber: A Novel of an Alternate World War (scheduled to be released July 3rd, 2018) is the first installment of a new series from Ace Books (Berkley under Penguin Random House) written by S. M. Stirling (Dies the Fire, The Sky People), the pen behind the long running and popular Change stories. The author’s passion for history exudes from his attention to detail and an insightful understanding of how events evolve and influence the future.

Black Chamber takes place during the onset of World War I. Theodore Roosevelt had once again found himself the President of the United States. After William Taft suffers a fatal heart attack and his Vice-President James Sherman soon follows suit, the Bull Moose takes the helm of a country bracing for war.

Our hero is Luz O’Malley Aróstegui, a special agent with the Black Chamber, a secret organization of covert spies purposefully implanted by Roosevelt around the globe to gain the necessary intelligence to maintain security within the boundaries of the U.S. Disguised as a Mexican revolutionary siding with the Germans, Luz is swept away on a harrowing adventure, deep into the bowels of the Reich’s rein. The startling discovery that they plan on launching a horrible new biological weapon called Loki’s Breath within the American shores as a preemptive strike challenges the agent’s skills and training as she races to get work back to the President.

Be forewarned that the story does not zoom along like many of the more popular novels of espionage. Oh, there is a fair share of explosive battles and tension filled conflicts to sooth the thrill seeker, but there is also a lot of delicate issues many people tend to overlook that, in the end, brings the most realism to a story filled with a lot of violence and prejudice.

Luz is a dedicated agent who will do whatever it takes to complete her mission. But readers are also exposed to the raw cause and effect behind the actions of this character. You can read about history from the convenient distance of time, but to experience the emotional toll it takes on those involved while the action takes place is something completely different.

This is where Stirling excels. A story does not have to be fast-paced with non-stop action to keep a reader’s attention. Black Chamber is a methodical journey of a remarkable hero who is plunged into the macabre depths of a world where every decision will not only determine her own fate, but that of millions who do not even know of her existence. With an astute attention to detail and a firm grasp on the human condition, Stirling puts all of the pieces together to create a realistic historical progression in a non-existent past.

Works in Alternate History do not always adhere to the SF/F/H genres, but there’s typically enough evidence to make the argument. Any event that takes place in an alternate setting can be considered fantasy do to the re-imagining of the past, or a work of science fiction as we are introduced to new theories of dimensional parallels. Either way, Black Chamber: A Novel of an Alternate World War by S. M. Stirling will take you back in history to a time that never was, but a time you won’t soon forget.