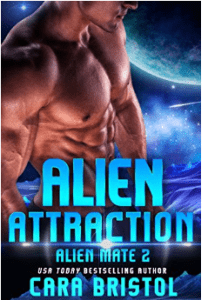 Need some recommendations for science fiction romance reading over the long weekend? Luckily enough, there are always new releases to report!

Cara Bristol combines a futuristic reality show with an icy planet, some not-quite-barbarians who need Earth women and many plot twists and turns in Alien Attraction (Alien Mate 2). One of my favorite bits was anything to do with the pesky cambots – evading their 24/7 surveillance was quite the task for the heroine and her unwitting co-star. The story: How insane is it to marry an alien as a publicity stunt?

I’m Sunny Weathers. You probably recognize me from my reality show, Sunny Weathers’ Excellent Adventures. I’ve had to perform a lot of crazy stunts in my career, but this one takes the cake! The producers are sending me to another planet to become an alien’s mail order bride. I’m not allowed to tell anybody it’s a gimmick, and as soon my contract is up, I’ll be leaving planet Dakon. Unfortunately, I hadn’t counted on my attraction to Mr. Tall, “Darq,” and Handsome…

I’m Darq. The moment I laid eyes on the female with pretty mud-colored hair and a sunny smile, I knew she was mine. Competition for females is fierce, and I was determined to claim a mate from the latest shipment from Earth, so I broke the rules. If anyone finds out, my own brother would banish me to the icy wilderness, and I’d lose my mate. I will do anything to keep her. 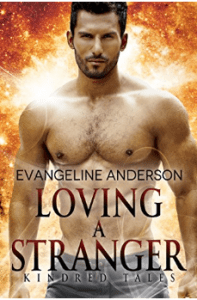 On occasion SFR authors, like authors in other romance genres, tackle difficult issues, which Evangeline Anderson has done with her new Brides of the Kindred novel, Loving A Stranger. Here’s the blurb: Reeve J’lorn is an M-Switch Kindred. Their ability to jump into and control the body of another male for a limited period of time has gotten them the derisive nickname, “Snatchers” and they are not trusted by the other branches of the Kindred. Nevertheless, it is to Reeve, an acknowledged pirate and Snatcher, that the Kindred must turn with a top secret mission–to snatch the body of a high ranking enemy and destroy a secret weapon which threatens the entire universe. And so, Reeve steps into the body of his enemy…and into a whole different world.

When Nallah Parokk’s husband goes into a coma, she secretly hopes he will never awaken. Harryx is cruel and cold to her, beating her often and using her like a whore. Her existence is nearly unbearable but she knows it could be worse if her husband decides to throw her out on the street. Then he wakes up and suddenly he’s…different. He’s kind and loving in a way he never was before, so much so that Nallah is almost ready to forgive his past behavior. But what is behind her husband’s sudden transformation? And will this change for the better last?

Though he tries not to, Reeve is falling in love with his enemy’s wife. But the beautiful little female with wide golden eyes is so wary around him, he wonders what the real Harryx did to her. When he begins to find out, he is horrified. How can he ever get Nallah to love him back when he is inhabiting the body of a monster–her jailer and abuser? He knows he has to tell her the truth about who he is but how can he make her understand? And if he does, will she ever be able to trust again after she finds out she has been…Loving a Stranger? 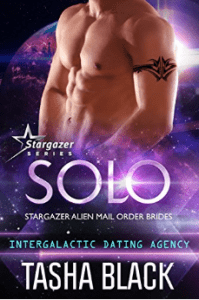 Tasha Black finishes her current mini trilogy within the overarching Intergalactic Dating Agency series, with Solo: Stargazer Alien Mail Order Brides #12. I love her books, always fun reads! The story: Cecily Page makes movie magic with special effects and make-up. Her wild creations and fun-loving personality give her a sought-after status in the movie industry, and a rock & roll lifestyle that has her traveling nearly every day of the year – just the way she likes it.

Solo has arrived on Earth with only one mission. He must use his movie star good looks and skills in bed to win a human woman as his life mate. But although he lost his heart to Cecily the moment before he met her, he can see she is determined not to abandon her independent lifestyle, in spite of their intense attraction.

When Solo learns of a mystery in Cecily’s past, their road trip to the Glacier City Comic Con turns into a race to unravel the threads of a riddle that will land them with information neither of them could have imagined.

When the truth comes out, will Cecily be ready to open her heart? Or will Solo be so lonely forever? 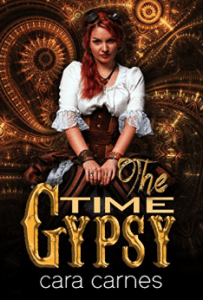 For something a little different, The Time Gypsy by Cara Carnes. The blurb: Amira is the best airship pilot in the galaxies and can bend the time slips within the Gypsy Nebula better than anyone, which means she only takes the jobs she wants. She’s sacrificed a lot for the freedom to pick her jobs, live free. A Gypsy can never love an outsider. It is forbidden. She walked away from the loves of her life once. Now they’re back, demanding her help to save the galaxies. Walking away again isn’t an option, but neither is giving her loves the second chance they are demanding.

The fate of the galaxies hangs on Mikel and Nivel completing one assignment—hire a Gypsy to slipstream them to where the survivors of the Tezan empire were placed and bring them home. Only one pilot knows where they are—the woman who they’d once intended to claim for their mate. She walked away from them once, vowed to have nothing to do with them again. They aren’t about to let her walk away from them again.

They must set aside their personal differences and work together to resurrect the Tezan Empire. Failure is not an option. But the journey to the Ancient Earth slipstream is a perilous one rife with danger. Finding the Tezan survivors within Victorian London might prove impossible. 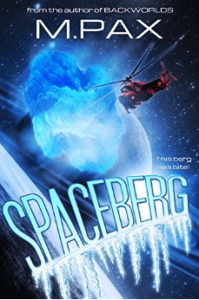 Space icebergs anyone? That’s part of the story in Spaceberg (Space Squad 51) from M Pax. The complete blurb: Spaceberg arrives without warning. The size of Jupiter, it hits with deadly consequences, taking out ships and colonies in the outer solar system.

Orbital Rescue Squad 51 is first on the scene with the most decorated first responder in the Sol. Nikili Echols battles the mega disaster to save her family, everyone in trouble, and entire worlds. With time running short, she’s forced to team up with her ex-husband in order to rescue their daughter and to save what remains of the solar system. His superstitions irk her like gas, but luck and organic plastic is what her plan needs to prevail. 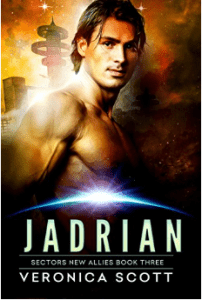 And in closing, yours truly has a new release this week as well, the third entry in my Sectors New Allies Series. Here’s the plot for Jadrian:  Taura Dancer has been pushed to her limits by alien torturers known as the Khagrish and is ready to die when suddenly the lab where she’s held as a prisoner is taken down by an armed force of soldiers.

The man who rescues her from a burning cell block is Jadrian of the Badari, a genetically engineered alien warrior with as many reasons to hate the Khagrish as Taura has. This set of shared past experiences and the circumstances of her rescue create an unusual bond between them.

Safe in the hidden base where Jadrian and his pack take her, Taura struggles to regain her lost memories and overcome constant flashbacks during which she lashes out at all who come near. Only Jadrian can recall her from the abyss of her visions and hallucinations.

As the war against the Khagrish continues, it becomes increasingly critical to find out who she really is and how she can help in the fight. Until she can control her terrors and trust her own impulses, Taura’s too afraid to pursue the promise of happiness a life with Jadrian as her mate might offer.

When he’s captured by the dreaded enemy, will she step forward to help save him, or will she remain a prisoner of her past?

What new science fiction romance reading adventures have you had?

A meteorite hit the moon during yesterday’s total lunar eclipse