I never thought Amazing Stories would publish a line like this: “panty-melting sci-fi romances featuring dominant alien heroes”. But we just did. 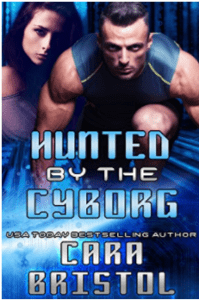 Cara Bristol brought out book 6 in her Cy-Ops series, Hunted by the Cyborg. Here’s the plot: Billionaire Carter Aymes, director of Cyber Operations, a covert cyborg force, devotes his wealth and life to saving others, rescuing hostages and other victims from desperate situations. His ultimate mission is to hunt down and eliminate Lamani, the alien terrorist mastermind, before he conquers the galaxy.

When Carter hires Beth O’Shea, a vulnerable but courageous woman with connections to his past, their attraction is immediate and strong, but he knows getting involved with her is a bad idea. He’s her boss, and he has way too many classified projects to protect to risk letting someone get close.
Rejected by the progenitors who cloned her, Beth is determined to live a normal human life, beginning by getting an ordinary job with a security firm. But, from the start, she questions the extraordinary secrecy surrounding the organization. She can’t help but wonder about the tall, muscled, larger-than-life director who gave her a chance when she desperately needed one. Could he ever be romantically interested in a woman like her, in a clone?
When Beth is attacked, they both realize how short and tenuous life is, and their mutual attraction becomes too powerful to resist.
As their relationship heats up, so does the urgency to capture Lamani before he can unleash a stealth weapon at a critical planetary Summit meeting. With time running out, Carter discovers that stopping Lamani may require sacrificing Beth’s life.

I enjoyed the book a great deal – there was a pretty spectacular plot twist that threw everything into doubt and then the author worked her magic and brought the characters through to the happy ending. It was also nice to see characters from the earlier books making appearances. 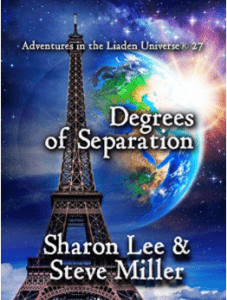 Co-authors Sharon Lee and Steve Miller just recently released Degrees of Separation (Adventures in the Liaden Universe Book 27), which made their readers very happy, judging from the early reviews. The series is always on my To Be Read list so perhaps I’d better get with it! Here’s the summary: Life. Luck. Love. Lowport.

Life, so the wags tell us, is what happens while we’re making other plans.

Luck. . .or, as some have it, chance. . .Luck is what makes Life interesting; introducing spicy bits of chaos – good, bad, and neutral. Without Luck, there is no savor – no adventure – in Life.

Love. Ah, Love. The yeast of Life, Love expands our horizons, deepens our understanding, and opens our eyes. Love makes us daring.

And Lowport? Lowport tries and tests Life, and Luck. And, most especially, Love.

So here is small tale of Lives in progress, plans made and altered – and altered again. A tale of bread, and Luck, and Love . . .

We start with two people – a baker, Don Eyr; Serana, a captain of the Watch. Two people who have not much in common, until Luck brings them together, and they see each other.

What, you say? There are no adventures here?

Are you certain? Remember that Luck is involved. 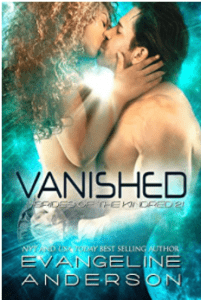 Evangeline Anderson continues her Brides of the Kindred series with book #21: Vanished.  The plot synopsis: Harper Wilde is sitting on the beach, minding her own business when a huge, muscular Kindred warrior with black hair and blazing white eyes demands that she accompany him into the future. Harper has no choice–she is dragged against her will into a dystopian nightmare–the world as it might become if something isn’t changed.

And that something that needs changing is Harper herself.

As a ten’sora, she is of special interest to the Hive, an insectile race of beings bent on taking over the Earth. By using her, they can conquer both the Mother Ship and the human race. Unless Harper is altered so the Hive cannot make use of her, the grim future she finds herself in will become reality.

Shad is a Shadow Twin–a Kindred male destined always to walk alone with very little chance of forming a bond with a female. Yet, he alone is able to make use of the looper–a time travel device which allows him to move back and forth between the past and the future to try and save Harper. Falling in love with her isn’t part of the plan but the big Kindred can’t help himself. But he knows he must put his feelings aside and do what is necessary to change the past…unless he wants the future to Vanish forever. 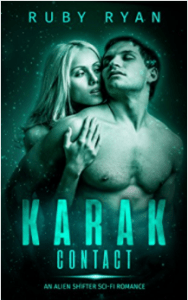 Karak Contact (Alien Shapeshifters Book 1) by Ruby Ryan has some unusual twists to its plot and is definitely on my To Be Read list. The blurb: A mysterious satellite crash. A late-night car accident. And a stranger who looks shockingly identical to the man on the front of Joanna’s book.

After hitting Eric with her truck in the middle of the Wyoming wilderness, Joanna has no choice but to take him back to her cabin. But his wounds heal suspiciously fast, and she begins to suspect his concussion is covering up some deeper secret.

She never would have guessed the truth.

When she discovers the man she’s taken to bed is actually Arix, a shapeshifter alien from the Karak Dominion of Planets, it’s all she can do not to run away in terror. But UFO hunters who witnessed the spacecraft crash begin snooping around her cabin, forcing Joanna and Arix to find a solution that keeps them both safe—which leads to them making an impossible, and downright crazy, decision. 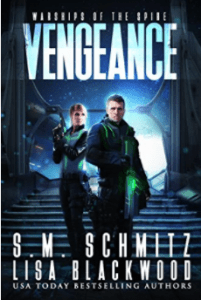 I personally love the concept of Artificial Intelligences who run big bad starships so the plot of Vengeance  (Warships of the Spire Book 1) by S. M. Schmitz and Lisa Blackwood sounds intriguing. Here are the details: When rogue AIs steal everything that matters most, the only thing left is vengeance.

As the flagship of the Spire Empire, Vengeance is a legendary AI whose broken heart has proven his greatest battle yet. But his new telepathic link, a little girl named Hayley, finally teaches him to love again—until rogue AIs attack her planet and level her home in a storm of fire and destruction. Vengeance is left with only one hope in his potentially immortal existence: the chance to avenge his innocent link.

Twenty years later, a young engineer joins his crew, and he’s inextricably drawn to her. But the closer he tries to get to her, the harder she pushes him away. Olivia Hawthorne risks everything—her friendship with her telepathic sisters and even her life—to assume a new identity so she can serve aboard Vengeance. After suffering at the hands of rogue AIs, she should be wary of trusting one again, even her old friend. And yet, she can’t seem to stay away from him. But when rogues raid Spire colonies, Vengeance and Liv must learn to overcome the fears shackling them to the past. Because if they want to survive, they’ll have to seek vengeance together. 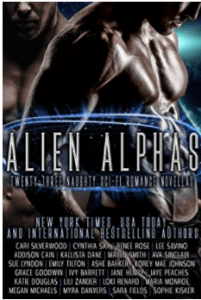 I don’t talk about those big box sets for $.99 too often in this column, but Alien Alphas has a new story from Cynthia Sax, she of the sizzling cyborgs, plus twenty-two other authors including some of my other must-buy  favorites like Grace Goodwin so here’s the summary: Alien Alphas is a collection of panty-melting sci-fi romances featuring dominant alien heroes, penned by New York Times, USA Today, and international bestselling authors. This decadently naughty box set includes twenty-three ALL-NEW, stand-alone novellas full of hot alien alpha males, breathless passion, and reluctant surrender.

I mean, what more do you need for steamy reading on a cold January evening? What new SFR reads do you recommend?

Are the outer edges of the universe moving faster than the speed of light?

Delany to Give Windham-Campbell Lecture