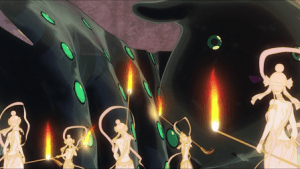 Land of the Lustrous #5 – Though the Lunarians try to renegotiate the deal, Phos is to be traded for Ventricosus’s brother, Acleatus. Acleatus has been warped by his time on the moon into something like a giant evil version of the Catbus from My Neighbor Totoro, but he recovers even more quickly than Ventricosus when returned to the sea. In the process, the Lunarian mission falls apart (literally). Not exactly a well-oiled villainous machine, are they?

Part of Phos cannot be recovered, so Ventricosus and Acleatus donate part of a shell in the hope that it can be a suitable replacement. And it’s more than that— Phos isn’t just back to eir old self, but stronger and faster.

Phos is more and more a composite being. E merged with Ventricosus and now contains part of Acleatus. Part of em may be traveling to the Moon. Perhaps e will find a way to incorporate some aspect of a Lunarian eventually. With the key feature of this world being the division into bones, flesh, and soul, perhaps this is the story of Phos becoming human, or something like one. 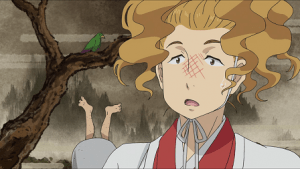 Hozuki’s Coolheadedness 2 #5 – This week’s fractured fairy tale features Heian-era personality Ono no Takamura. (If you want less adulterated versions of his legends, see here for his time as an official in the underworld and here for his mundane exploits.) After filling in for Hōzuki for a day, Takamura won himself a job with the first king of Hell, Shinkō.

Buddhist traditions vary, but in most places they agree that there are at least ten kings overseeing the underworld. The soul of the newly deceased passes through Hell for a time to be judged by each of them in turn. Enma (Yama in the original Sanskrit) is the most important, but the fifth in line.

In Japan, Enma has been merged with a bodhisattva to also be Jizō, patron of babies and children, and a deliverer of people from the suffering of Hell. Jizō statues are in plentiful supply throughout Japan, so Hōzuki would only need to provide a little encouragement for Enma to be overwhelmed by souvenirs.

For a comedy, this show has gotten awfully educational. I’m not complaining, though, as it’s certainly staying interesting. 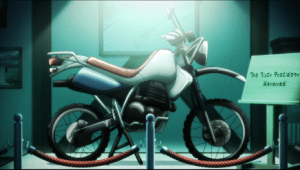 Kino’s Journey -the Beautiful World- the Animated Series #5 – Two rather slight stories this week, but hey, at least now we know there are problems in Kino’s world that can be solved by means other than shooting someone or something. The first concerns the pathos of a motorcycle trapped as a museum exhibit, but in the process drops some interesting details about the world.

The boy Kino meets later asks how to become a traveler when he grows up. Far from being a one-off wanderer, Kino seems to be part of a recognized profession, if not a highly esteemed one. And then there’s the moment when she says she’s never seen another motorcycle besides Hermès. Who built them, then, and how do people learn to maintain them, and where do they get spare parts?

The second outing features a country that had a revolution some years ago (and, apparently, imposed a paranoid dictatorship that doesn’t want anyone escaping). Kino encounters a situation which can be easily sussed out by the Law of Character Economy, but with the interesting spin that absolutely everyone is keeping up some pretense for the imagined benefit of someone else. This could be a deep commentary on modern relationships and keeping up appearances, but I suspect the author just wanted to set up an interesting situation. What I’m really wondering is if this is supposed to be a local custom everyone indulges in there, or it was just to do with the particulars of that situation. 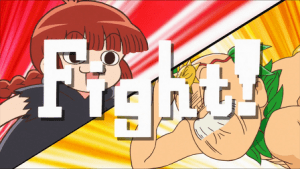 Magical Circle Guru-Guru #18 – En route to the Land of Flowers, Kukuri suddenly discovers chocolate and is instantly hooked. But the village of chocolatiers cannot make any more until they are free to gather ingredients in the forest, so the party has a nice simple new quest. For about a minute or so, and then they’re back to stuff like riding a UFO while being chased by a landshark.

It’s one of those days when our heroes can’t do anything right. Choosing to appeal to the Flower Queen, they fail a ton of Diplomacy and Bluff skill checks before Mogel turns up to vouch for them. And then the bard shocks the queen’s delicate sensibilities so badly that she has to be re-raised from an infant.

One thing leads to another until Kukuri is kidnapped and Nike finally has a chance to do some old-fashioned rescuing. Maybe this is where he becomes the traditional hero, but odds are Kukuri’s going to have to get them both out of this again eventually. 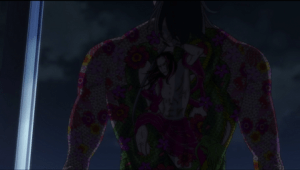 Inuyashiki Last Hero #4 – Samejima is every stereotype of the old-fashioned Japanese gangster on steroids (possibly literally). He lives in the action-movie world where the mob deals drugs and kidnaps women with impunity. You can tell he’s the evillest of the evil because he’s dark-skinned and does gay things to people he doesn’t like. The author was definitely not feeling subtle when he wrote this.

Samejima’s fatal mistake comes when he picks Fumino Inoue as his next victim. Because she is a Good Girl, she isn’t frozen with fear or impaired by generic TV drugs. And her boyfriend has enlisted the help of the very person who can take Samejima and all of his friends out of the crime business forever.

Every scene with Ichirō in it is pure gold. Even when this week’s plot is an avalanche of overused tropes, it still works on an emotional level because of him. When he shows up with his stooped posture and sensible pants and tries as hard as he can to be the hero people need, it is possible to momentarily forget the racist, ableist, sexist setup and enjoy.

Samejima is right about one thing: Ichirō is going to be identified sooner or later. Not so much because of a gang or some other shadowy organization, but likely because it’s the 21st century and everyone’s carrying a camera around in their pocket.