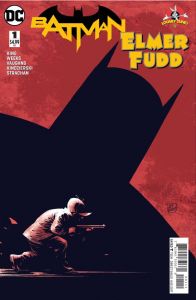 DC Comics is doing something utterly awesome. Batman/Elmer Fudd Special #1 hit the stands on June 28, 2017, and comic book fandom will never be the same again. A surprisingly well-done crossover between two iconic characters, this issue merges the worlds of comic books and animation with such natural cohesion, it opens the door to a wide range of future possibilities.

Batman/Elmer Fudd Special #1 was written by Tom King (The Vision, The Sheriff of Babylon) with cover and interior art by Lee Weeks (Daredevil) while color was provided by Lovern Kindzierski (Marvel) and lettering by Deron Bennett (DC, Vault).

What makes this crossover so spectacular is the smooth transition between what otherwise may be considered two very differing genres within their respective forms of media. The Batman universe has always been a dark, sinister place where nasty things happen to and by nasty people. Sure the 60’s television series took the storylines in a campier direction, but the overall adult grit remained in subject and innuendo. On the other side of the spectrum, we grew up with the playful lunacy of Looney Tunes. Even the visual element of raw violence was often played off as gag humor, allowing us to see it as pure silliness.

So, when you take that perceived silliness of Looney Tunes and place it in the Noir world of Gotham, things suddenly get real. We no longer see talking rabbits or senseless caricatures who are exaggerated to suit the humor, we see real characters who are defined by their actions which may or may not be influenced by their looney quirks. From their familiar taglines to their embellished personas, the cartoon word suddenly comes to life and we finally get to see real people who aren’t so silly any more.

This comic dislodges the perception that cross-media cannot be taken seriously. The Who Framed Roger Rabbit movie taught us that real world doesn’t play well with the cartoon world. But Batman/Elmer Fudd Special #1 proves otherwise. We just need to see these characters in a different, realistic light. 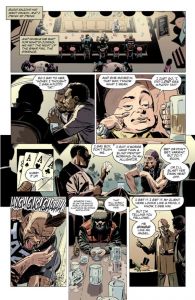 In a single page (shown at right), readers are presented with a number of favorite Looney Tune characters as they would appear in the darker yet real world of Gotham. Tweety appears to be a kind-of mob boss who enjoys the center of attention as he tells a lewd story. Foghorn Leghorn is a gambler who happens to be sitting opposite a pirate-y looking Yosemite Sam. The Tazmanian Devil is in a single pane, but we know its him so we move along so we don’t get hurt. Then we pan to Marvin the Martian who is sitting alone contemplating how to destroy the world – for a better view. And finally, we stumble across a guy who could pass as Stan Lee trying to sell a singing frog – because we know THAT would never happen.

The body of the Batman/Elmer Fudd Special #1 story follows an angry Elmer Fudd looking for justice after the apparent murder of his girl Silver St. Cloud. After a mischief Bugs points the hunter in the direction of Bruce Wayne, the Caped Crusader and Fudd clash in a spectacular battle before forming an unlikely bond so that they can solve the mystery.

Batman/Elmer Fudd Special #1 is a refreshing collaboration of art, stories, and genres. Come on DC, don’t make us wait a long time for #2.

The original novella, “Before We Disperse Like Star Stuff,” delves into questions of archeology, preservation, respect for the land and for remains, and cultural appropriation versus education versus access.

Water Ice on Moon’s Poles Confirmed For The First Time