The latest data from ESO’s Very Large Telescope suggests that the orbits of those stars around the supermassive black hole at the center of our Milky Way may show the subtle effects predicted by Einstein’s general theory of relativity. There are hints that the orbit of the star S2 in particular is deviating from the path calculated using classical physics. This intriguing result is a prelude to much more precise measurements and tests of relativity that will be made using the GRAVITY instrument as star S2 passes very close to the black hole during 2018.

The center of the Milky Way lies only 26 000 light-years from Earth. That’s where we find the closest supermassive black hole to us, one which has a mass four million times that of the Sun. Our galactic anchor is surrounded by a small group of stars orbiting at high speed due to its exceptionally strong gravitational field. On our doorstep, it’s the perfect environment in which to test gravitational physics, and particularly Einstein’s general theory of relativity. 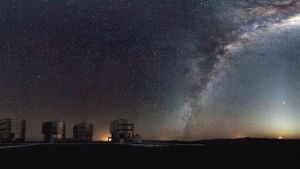 Using ESO’s Very Large Telescope (VLT) in Chile – and data collected from other telescopes over the last twenty years – German and Czech astronomers have been able to apply new analysis techniques to already existing observations of those stars orbiting the black hole.

The team found suggestions of a small change in the motion of one of the stars, known as S2, consistent with the predictions of general relativity. If confirmed, this would be the first time that a measurement of the strength of the general relativistic effects has been achieved for stars orbiting a supermassive black hole.

Marzieh Parsa, PhD student at the University of Cologne and lead author of the paper, is delighted: “The Galactic Center really is the best laboratory to study the motion of stars in a relativistic environment. I was amazed how well we could apply the methods we developed with simulated stars to the high-precision data for the innermost high-velocity stars close to the supermassive black hole.”

The high accuracy of such measurements – made possible by the VLT’s near-infrared adaptive optics instruments – was essential for the study as it allowed researchers to accurately map the shape of S2’s orbit.

“During the course of our analysis we realized that to determine relativistic effects for S2 one definitely needs to know the full orbit to very high precision,” said Andreas Eckart, team leader at the University of Cologne.

As well as more precise information about the orbit of star S2, this latest data provides us with the best measurement of the mass of the galactic black hole and its distance from Earth to date.

Exciting times lie ahead in 2018, as it is hoped the VLT will reveal general relativistic effects more clearly, and allow astronomers to look for deviations hinting at a new branch of physics.

AI Experts suggest that all government have an “AI Czar”

The planetary detection tech is getting better and better all the time.

Look to The “Skai”: The Future of Flying Vehicles is Here