Richard Beard’s The Apostle Killer is a strange, entertaining novel. But is it really alternate history? 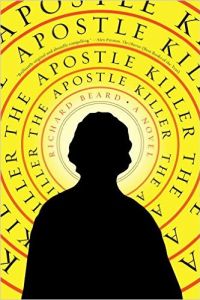 What if you applied modern investigation methods to the death and resurrection of Jesus Christ? You may get The Apostle Killer (a.k.a. Acts of the Assassins) by Richard Beard, the next nominee to cover in my review of this year’s Sidewise Award nominees.

Our story follows Gallio, an up-and-coming member of the Roman Empire’s Complex Casework Unit (CCU) assigned to Israel, a province always on the verge of boiling over. Still he did successfully manage to silence the agitator known as Jesus by arranging for him to be arrested and executed with the help of one of Jesus’ former apostles, Judas. Things go awry, however, when Jesus’ body disappears and the remaining apostles declare Jesus was resurrected into heaven.

As lapses in judgement over the execution of Jesus come to light (why weren’t his legs broken on the cross per standard procedure?) Gallio turns over all of Jerusalem to find the body and provide a rational explanation for the resurrection, but he fails to find the body and when Judas is found dead by apparent suicide, Gallio’s career in the CCU is over.

Years later, the disgraced and aging Gallio is called back from service in the Roman Legions to return to the Jesus case by his former partner in the CCU. Someone is going around killing the apostles. Worse yet, Jesus is said to return in the lifetime of the apostle he loved the most. With the CCU fearing this may herald a catastrophic terrorist attack, Gallio must once again find a rational explanation for the resurrection of Jesus and perhaps stop the growing Jesus cult from overwhelming the Roman Empire.

The Apostle Killer is an odd book to say the least. Despite Gallio being a Roman soldier, he uses modern day investigative methods and procedures. In fact, there are a lot of anachronisms throughout the book ranging from modern technology like cars and cell phones, to modern social mores being applied to an ancient setting. One could explain this by saying its just decoration really. It takes an episode from our distant past that is controversial and hazy, and puts it into the modern world so the reader can relate to it better.

And yet that would be an incorrect way to look at The Apostle Killer in my humble opinion. For one thing, Ancient Rome exists at the same time as the United States of America. Peace talks are ongoing between Israelis and the Palestinians, even as the Roman army occupies the region. Christianity is also both a growing cult and an established world religion with billions of followers and churches and shrines around the globe. While the dead bodies of the apostles are examined by Gallio and his team, pilgrims simultaneously worship at the same spot in a way that perhaps only a quantum physicist can understand. Thus it appears the anachronisms aren’t just set dressings, but are happening, have happened and will always happen. How do we explain this? Is Gallio and others who are on the case with him unstuck in time and are thus experiencing everything that happens at once? Is the CCU really just some temporal police force created by Rome?

While that might be cool, the simple explanation is that its all just a metaphor. In my mind, Gallio is the modern archetypal skeptic. The one who looks at events like the death and resurrection of Jesus and applies logic and reason to figure how it “actually” happened, but at the same time fails to grasp one of the most important aspects regarding faith in divine: it doesn’t matter if it can be explained or not. Belief exists in an entirely different realm than reason and Gallio’s failure to realize this spurs on much of the plot. For example, Gallio struggles to comprehend why someone would want to die because he cannot grasp a concept that comes easily to many believers: martyrdom.

That is not to say that it isn’t a good book. On the contrary, I enjoyed reading it immensely. Seeing Beard pick apart the death and resurrection of Jesus reminded me of a book reviewer deciding to review the Bible like they would any cheap sci-fi novel, which I found very amusingly meta. On top of that, Gallio was likable, yet a complex character, which kept me interested on whether he would find Jesus in the end (both literally and figuratively).

And yet, The Apostle Killer is not alternate history. So while it will certainly get a recommendation from me for those who like weird, thought-provoking books, I can’t in good faith vote for this as the best long-form alternate history. So who do I think should win? Well you will have to wait and see when the winners are announced, but in the meantime, stay tuned because next week I will finish reviewing the short form nominees.