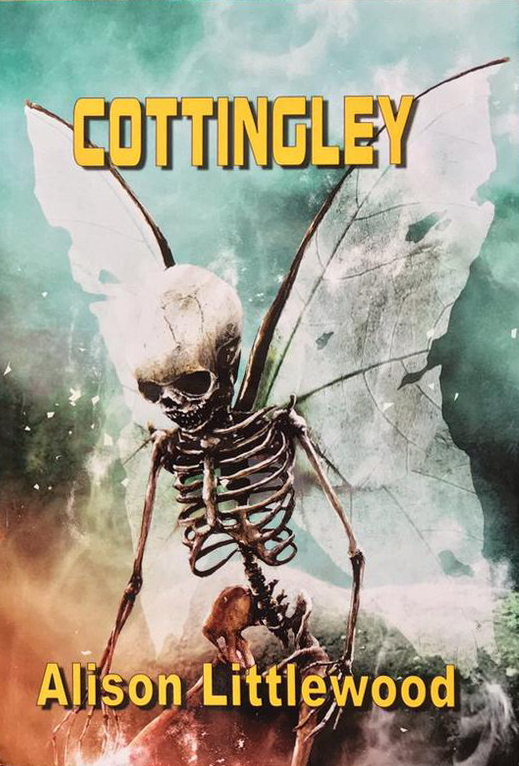 Cottingley is a novella by Alison (A Cold Season, The Hidden People) Littlewood, one of the UK’s finest writers of dark fantasy and horror fiction. The title, (published by NewCon Press), combined with the striking cover by Vincent Sammy — a humanoid skeleton with butterfly-like wings — should indicate to anyone who knows about the famous Cottingley fairy hoax something of the inspiration for this tale. For those who do not, here is an account from Wikipedia:

The Cottingley Fairies appear in a series of five photographs taken by Elsie Wright (1901–88) and Frances Griffiths (1907–86), two young cousins who lived in Cottingley, near Bradford in England. In 1917, when the first two photographs were taken, Elsie was 16 years old and Frances was 9. The pictures came to the attention of writer Sir Arthur Conan Doyle, who used them to illustrate an article on fairies he had been commissioned to write for the Christmas 1920 edition of The Strand Magazine. Doyle, as a spiritualist, was enthusiastic about the photographs, and interpreted them as clear and visible evidence of psychic phenomena. Public reaction was mixed; some accepted the images as genuine, but others believed they had been faked.

Interest in the Cottingley Fairies gradually declined after 1921. Both girls married and lived abroad for a time after they grew up, yet the photographs continued to hold the public imagination. In 1966 a reporter from the Daily Express newspaper traced Elsie, who had by then returned to the UK. Elsie left open the possibility that she believed she had photographed her thoughts, and the media once again became interested in the story.

In the early 1980s Elsie and Frances admitted that the photographs were faked, using cardboard cutouts of fairies copied from a popular children’s book of the time, but Frances maintained that the fifth and final photograph was genuine.

Alison Littlewood takes these events as the background for her novella, which unfolds as a series of letters written in 1921-22 by a Lawrence Fairclough to a Mr Gardner. In reality Edward Lewis Gardner was himself a noted writer who was involved with the original investigation into the Cottingley mystery, and in Littlewood’s story acts as an intermediary, or possibly barrier, between Fairclough and the much more famous Conan Doyle. The crux of the matter is that Fairclough, his widowed daughter-in-law, Charlotte, and granddaughter, Harriet, who live in the titular village, have all had their own encounters with fairies, but these elemental beings seem rather less benign than the creatures supposedly photographed by Wright and Griffiths.

Fairclough has photographed the fairies, but more than that, he has brought home the remains of a fairy who died during one of his family’s visits to the woods. The story unfolds entirely thorough the letters of Fairclough, a well-meaning, sincere, very proper English gentleman, who becomes gradually more frustrated by Gardner’s blocking any direct communication with Conan Doyle, and by the realisation that he is not being taken seriously. Meanwhile there are consequences in bringing the remains of the deceased fairy into the Fairclough home. Charlotte’s behaviour changes, strange events occur on a daily basis, and after a traumatic incident Charlotte loses sight in one eye. Meanwhile Fairclough’s evidence itself alters and he begins to have doubts about his understanding and interpretation of events.

Cottingley is only 74 pages long and can be read in a couple of hours. It is beautifully written, Littlewood perfectly capturing the style of letters from almost a century ago. The novella is both an intriguing ‘fairy tale’ and a compelling character study, as, without access to Mr Gardner’s letters in reply, we are forced to read between the lines, such that sometimes we may see what Fairclough does not. The result is a very English story, understated, filled with ambiguities and suggestion; a slow-burning narrative, gradually building to a tense, unsettling finale.

Cottingley occupies similar territory to that explored so eloquently for so many years by the late Robert Holdstock, the old folkloric matters of Britain, of what may still linger in our ancient woodlands. Those seeking cheap thrills and blood-splattered horror should look elsewhere. For those who enjoy classic English style dark fantasy in the lineage of Arthur Machen and Algernon Blackwood, look no further. Cottingley is a treat and another triumph for one of the best writers of dark fiction around.