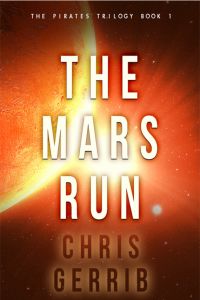 Released on June 1, 2016, The Mars Run by Chris Gerrib was the first of three ambitious books in what would eventually become The Pirates Series. Welcome to a fast-paced introduction to a trilogy that takes readers into the dark universe of pirating and space travel in a not so distant future.

It’s 2071, and travel to other planets is finally a thing. Trade routes to Mars are just humanity’s first step to reaching the stars, but the evil that resides in man may slow that progress. Piracy is no longer limited to the waters of earth. With the vast oceans of space spanning millions of miles between planets, the dangers are multiplied exponentially.

When an opening sentence hooks the reader with a gambit of emotions and concern, the rest of the story can only go in one of two directions. One, the tale lives up to the initial expectation, being well worth the reader’s time and effort. Or two, the opening gives false pretense and the reader is let down. Luckily, Gerrib does not disappoint here.

“When Raj stepped up onto the metal staircase leading into the vacuum chamber, neither of us knew he wouldn’t leave the chamber alive.”

And from this point on, the story doesn’t slow down.

It’s not often one finds a successful story that begins with a number of flashbacks. Flipflopping numerous times between past and present can quickly become a distraction as the reader’s interest may falter wondering when the “real” story will begin. But what this author has done in a large portion of the book’s beginning is smoothly link the current emotional response of our hero Janet Pilgrim with the realistic gambit of emotions one goes through following a tragic event. So, by the time we catch up to the present, we are fully invested in the character and willing to tag along for the rest of the journey.

Be warned that there is some content that may be considered too mature for the younger reader, but this does not mean it comes across as gratuitous. Throughout history, piracy has been a violent and sometimes twisted affair, and providing such harsh realities as slavery and sordid sexual content to a fictional tale does help establish validity if done properly. 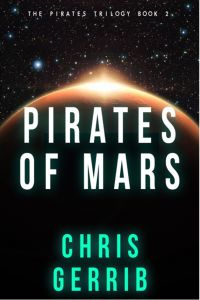 The Mars Run is labeled as book 1 of 3 in The Pirates Series. Pirates of Mars is the title of book 2, released shortly after the first book on June 15, 2016, while the third book, The Night Watch was released just two weeks later on June 29, 2016. All three editions are available in eBook format and softcover print from Cincinnatus Press while Pirates of Mars can also be found in Hardcover from Hadley Rille Books. 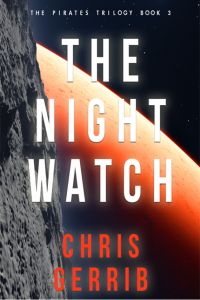 Though the characters and plotlines of all three books make up a much larger universe, they are indeed stand-alone works with differing styles (book 1 is written in first person, unlike the next two books) and can be enjoyed individually. Of course, experiencing the entire series in order of publication would be best, readers should note that both Pirates of Mars and The Night Watch follows the same pace and excitement of pirating in this dark future as the first installment.

It’s hard to believe that The Mars Run is Chris Gerrib’s first publication. With such a strong beginning to the Pirates Series and just as impressive follow-ups with Pirates of Mars and The Night Watch, fans should be anxious to see what’s next.