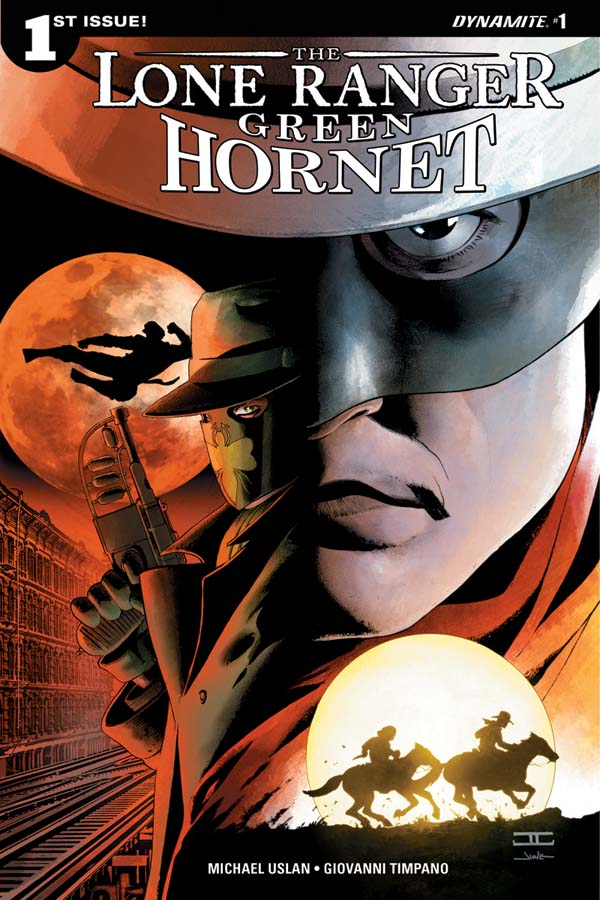 Two masked men from different periods of history – and when I say history, put inverted commas around the word, as it is fiction, obviously – are the central conceit of the comic series collection, The Lone Ranger and The Green Hornet (Dynamite Comics). Having read and enjoyed this collection by Michael Uslan (writer) and Giovanni Timpano (artist), I found myself asking, “Why hasn’t this been done before?”

Opening in 1936 with an ageing Lone Ranger telling children stories of his past, we are introduced to the milieu when the former masked man has a discussion with his newspaperman nephew, Dan Reid, about the current state of play vis-a-vis the impending war.

As the retired ranger puts it, comparing the Cavendish Gang – their evil doings being the current day’s news – with the Nazis, “Their no good is a far worse no good than no good ever was in my day!” He adds, foreshadowingly, “It makes me mad as a hornet.”

The crux of the tale revolves around Dan’s despair over his son, Britt not making anything of his life. A subject upon which the former Lone Ranger, has an idea.

Unsurprisingly, the graphics employ a lot of cinematic techniques from westerns, from the flare of sunlight across a ridge as men on horseback ride in shadow from across the horizon, to facial closeups most famously used by Sergio Leone in his Man with No Name movies, and even characters riding off into the sunset. The sunset ride appears early in the book, however, so it just about manages to skirt the cliché.

After a scene forty four years in the past when the ranger dispatches the head of the Cavendish gang, we are back with Britt and a key meeting at the offices of The Daily Sentinel with the head honcho of The Untouchables, Elliot Ness. Britt has taken over the publishing business after his father died of a heart attack.

There is a grisly set of murders running like a bloody river beneath the narrative. The torso murders are the names given to the deaths of twenty-four scientists, half of them German immigrants.

Ness is seeking help to deal with the Nazi sympathiser group, The Bund. And in an anti-Nazi rally which becomes violent, Britt cries, “I’m mad as a hornet and I’m not going to take this any more,” adapted from the famous line given by Peter Finch in the movie, Network. I find lines like these, and the various references to “greenhorn” and so on, awkward and rather clumsy, striving for the effect of being amusing but not quite succeeding.

More awkward lines ensue. Britt, talking about the scientist Enrico Fermi, says, “He won this year’s Nobel prize for radioactivity! He’s Italian, but it was all Greek to me.” Ouch!

When Britt finally adopts his mask as The Green Hornet, uncle John gets exercised about the fact that Elliot Ness wanted a new Lone Ranger to help him tackle the city’s crime wave. This was oddly petulant and his reasoning never explained.

Going back in time to the 30s again, we see Jesse Owens, who has just won the Olympic Games in Germany – much to the disgust of the racist Hitler. When the Fuhrer refuses to shake the athlete’s hand he is challenged by John Reid, who says, “The master race? Ha! That was just won by Jesse Owens!” Owens reappears two years later in a reunion with John Reid back in America. And now Reid wants to train Jesse to become the new Lone Ranger.

Owens says, “You want a black man to be a symbol of justice in America in 1938? You’re crazy!”

By this point in the narrative, I found myself thinking about Barack Obama and wondering if this was a conscious parallel on the part of the writer. And given the state of play today when Donald Trump is setting out his stall on immigration, asking for a wall between the USA and Mexico, again I felt that something of the zeitgeist was being reflected in the pages here. 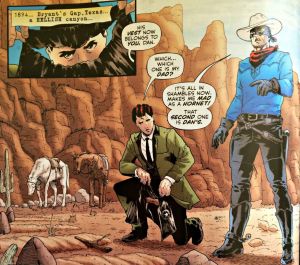 Various storylines subsequently unfold, looking back at the Lone Ranger’s life, an appearance of an ageing Tonto in a 1938 performance of the last Wild West Show in the West, a firefight involving members of the Bund, the Ranger (now Jesse Owens), the Green Hornet and John Reid himself, who is still able to throw a pretty mean punch.

The old Tonto becomes a mentor to the Green Hornet’s sidekick, Kato. The rollercoaster ride continues to a bittersweet ending that is satisfying and makes complete sense.

The artwork is excellent, employing a cinematographic approach to the visuals, well-drawn characters and dramatic montage splash pages between chapters.

While I felt the whole story somewhat overheated,  kitchen sink included, I admit this is overall an entertaining read and very much in the spirit of its pulp fiction origins.