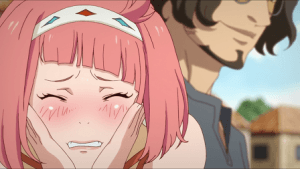 Rage of Bahamut Virgin Soul premiere – Nina Drango, whose last name should totally not be examined by eager anagrammers, is a wannabe bounty hunter in a RPG-like fantasy world. Despite being super-strong and having the sort of connections that somehow allow her to get crash space at a god’s house, she’s also a total klutz. She also has a unique power which has an unfortunate tendency to activate when she’s around cute guys.

In the background, the human king is killing angels and enslaving demons. One demonic vigilante fights to free the slaves, and when Nina botches her chance to capture him, she finds herself entangled in their struggle…

Fans of the first Rage of Bahamut will see a few familiar faces, and will probably be more engaged by the end of this story than new viewers. For the newbies, there’s no big recap, but a brief mention of the events of ten years ago suffices for now, and there’s an effective sense of being in a world that’s already well-developed.

This is the most expensive-looking production this season after Attack on Titan. It’s all polished, fluid animation, and excellent sound work. 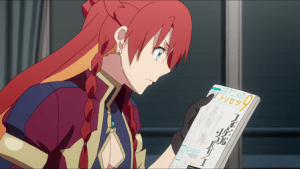 Re:CREATORS premiere – Somewhere, a girl throws herself in front of a train, and then the show proceeds with a completely different story. Sōta Mizushino is one of millions of anime geeks who wants to do anime for a living someday but lacks inspiration. Luckily for him, anime characters start coming to life! The first is Selesia Upitiria, magic giant robot pilot, knocked into our world by some kind of evil sorcerer in hers. The usual shouting and flailing about what the heck is even happening ensues, culminating in a magic battle between Selesia and the sorcerer, with the next character turning up.

This one’s got decent production values, but could’ve used some writing inspiration for itself. It’s set to be another of those shows where a guy accumulates a pile of high-maintenance girls who make his life hell. At least no one’s executed a boob faceplant yet? Meh. 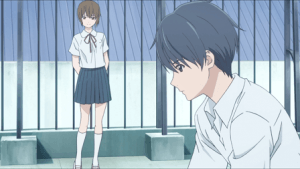 Sagrada Reset premiere – In the town of Sakurada, nearly half the population has special powers. (Or, it’s the one place people can use special powers, since all memory of the powers fades if they leave.) One of them is Kei, a boy with perfect recall. Another is Misora, a girl who can set a save point and reset the town to that state. This also wipes everyone’s memories of what happened later, except Kei is immune.

You wonder how Misora figured out what her power does, since her memory is reset too, but Sagrada Reset isn’t interested in figuring that stuff out. Instead it wants to be about the characters psychoanalyzing each other in the least exciting way possible. Most of it is blank-faced characters staring into the distance while reciting speeches.

Presumably, the class president who pushes Kei and Misora together has reasons for doing so, perhaps prompted by a power of her own, but she jumps off a bridge before it occurs to anyone to ask. Presumably, someone will eventually pick up on the comments about a little girl Kei and Misora befriend being a clone or changeling or something. Presumably, one of these characters will eventually experience emotions, curiosity, or a desire to do something rather than just sitting around and blankly speechifying. Today is apparently not that day. 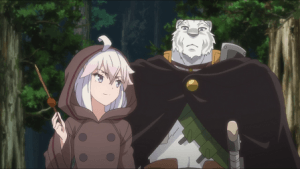 Grimoire of Zero premiere – An unnamed beast-man has grown up with the stigma of being a creature created by witchcraft. As a mercenary, he now hunts down witches wherever they can be found. So, naturally, he finds himself protecting one.

The witch is Zero, a magical prodigy who has found a way to record spells in a magical book. Problem: the book has been stolen, and contains sufficient power to destroy the world if placed in the wrong hands.

The responsible party and how they managed to take the book are left a mystery for now; the episode concentrates on establishing the relationship between Zero and her reluctant bodyguard. This show is based on a light novel, but outside of picking an overused setting, it is extraordinarily non-light-novel-y. No one’s being forced to endure groping, contrived misunderstandings, or ridiculous arbitrary rules; Zero and the mercenary both come across as competent, reasonably mature people who are going to be able to stay on task. 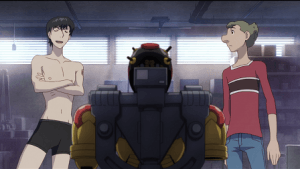 Atom: the Beginning premiere – In the original Tetsuwan Atom (Astro Boy), the robot Atom was built by Dr. Umatarō Temma as a replacement for Temma’s dead son. After becoming disappointed with the artificial boy who couldn’t age, Temma sold him to a circus. Atom was rescued by Dr. Ochanomizu, a strong supporter of robot rights, who became his surrogate father and built him robot siblings.

In this reimagining, Temma and Ochanomizu are grad students trying to make good on their idea for a revolutionary new AI. The time they inhabit is a few years after some unspecified catastrophe, from which Japan recovered with heavy use of robots, allowing for a more 1960s-style future. Temma isn’t a total jerk this time, though he is shouty and obsessed with horsepower; Ochanomizu is the dorky and quietly competent one. They’re just scraping along with barely enough budget to build their robot, when an impulsive decision on Temma’s part suddenly allows the robot a chance to be a hero.

Additional complications include Ochanomizu’s mechanically inclined little sister, a rival grad student, the beginnings of a love triangle, and some shadowy entity responsible for the sabotage which was stopped by the robot. There’s also time to introduce Robot Disneyland and the concept of robot wrestling.

There is a lot going on here, and most of it is fascinating. The only thing I’d be worried about is having time to explore it with only one season. 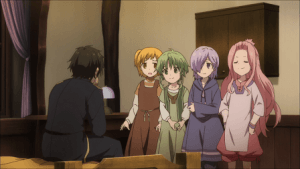 WorldEnd: What do you do at the end of the world? Are you busy? Will you save us? premiere – First, a congratulatory raspberry to whoever at Crunchyroll saw one of the longest titles in the history of anime – everything after the colon is the source light novel publisher’s translation of the series title – and decided it needed to be even longer.

The story opens with what sounds like an epilogue, as the female lead talks about what a truly awesome dude the protagonist is/was. After that, they get their Meet Cute, and a very nice interlude where the show skips the usual wacky music in favor of a beautiful rendition of “Scarborough Fair”.

Aaaaand then we’re back in light novel territory. Willem, the bland protagonist, takes a military commission with very vague details which naturally drops him into a situation where he will be the only male for miles around. In this case, he’s supposed to watch over some “secret weapons” which turn out to be a bunch of cute girls. Hijinks ensue. An after-credit sequence also shows that Willem was alive 526 years ago to have thoughts on food, and humans died out around then, to be replaced by the anthropomorphics making up most of the population now (the last part is an afterthought left to a narrator).

This hasn’t descended to the usual depths of light novels yet, but there isn’t much to make it stand out from the crowd either. Nothing about it feels the least bit original, and the production values are just about average. 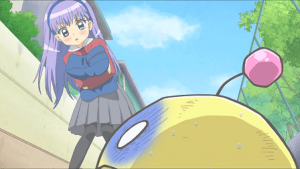 PriPri Chi-chan!! premiere – A subterranean-dwelling chiteijin (roughly a Japanese equivalent to a gnome) sets off an adventure to sample the rumored delights of the word above. Unfortunately, he’s a little too successful and finds he’s too stuffed with treats to make it back down through his burrow. Cornered by a human, he expects the worst, but luckily she’s a kindhearted girl, and this turns out to not be her first time around the block with mythical beings…

With half-length episodes and a generally light and silly tone, this doesn’t aspire to much, but it’s pretty good at what it does. Chi-chan the chiteijin is an endearing critter, and his rescuer Yūka is sweet but not cloying. Worth checking out if you need to lighten your mood.

Here we are then, at the end of a very long premiere phase. Next week I’ll catch up on the possible candidates for the season lineup and figure out what we’re following for the rest of the season. We’ve got quite a list now, thanks in part to whatever last-minute deals saved the Sentai Filmworks licensees (the first five shows here) from being exclusive to Anime Strike. They’re still stuck behind a double paywall for US viewers, but hear that sound, fellow Americans? That’s the rest of the world, who frequently get left out entirely, playing the tiny violin of sympathy for us.

I’m adding Rage of Bahamut to the list of candidates for sure, and Atom provisionally, in case it becomes available to the British Isles soon. They’ll fight it out next week against Attack on Titan, My Hero Academia, Alice & Zoroku, The Eccentric Family, Kado, and Boruto.