When it comes to authenticity, probability, and believability, nothing gets by the purists of Science Fiction fandom. The gray area between Fantasy and Science Fiction more often than not lies in the details. So when a collection of works comes out that is penned by those most familiar to the sciences behind these ideas, the authenticity, probability, and believability increases tenfold. 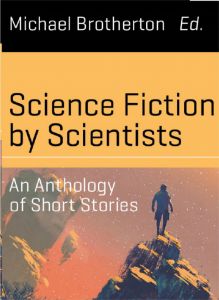 Springer International Publishing’s recently released Science Fiction by Scientists: An Anthology of Short Stories edited by Michael Brotherton takes these challenges head on, and, for the most part, succeeds.

As a Science Fiction advisor for Springer, Editor Michael Brotherton (Tor Books SF author of Star Dragon and Spider Star) has compiled a fine list of fourteen works of fiction. A professor of astronomy from the University of Wyoming with a specialty in observational studies of anomalies in the infinite reaches of space, it’s no surprise that he has been able to detect such a variety of short stories from these equally diverse and creative minds.

These tales range vastly in theme and content, but the true exclusivity of the anthology lies in the background of these writers. Some draw more emotion and establish a bonding likability between character and reader than others, but they are all evident of the compassion and knowledge of the individual author.

Included in this collection is:

Down and Out by Ken Wharton (physics professor at San Jose State University and author of Divine Intervention);

The Tree of Life by Jennifer Rohn (Principal Research Associate in the Division of Medicine at University College London and author of the novels Experimental Heart and The Honest Look);

Hidden Variables by Jed Brody (Physics teacher at Emory University and author of SF novels The Philodendrist Heresy and The Entropy Heresy);

Betelgeuse by J. Craig Wheeler (Professor at University of Texas at Austin and author of The Krone Experiment and Krone Ascending);

Sticks and Stones by Stephanie Osborn (degrees in astronomy, physics, chemistry and mathematics with numerous books including Burnout: The mystery of Space Shuttle STC-281);

One for the Conspiracy Theorists by Jon Richards (Senior Software Engineer at the SETI Institute);

The Schrodinger Brat Box by Carl (Carlton) Frederick (theoretical physicist with many short stories in Analog);

Fixer Upper by Eric Choi (aerospace engineer and coeditor of Carbide Tipped Pens and The Dragon and the Stars anthologies);

Spreading the Seed by Les Johnson (physicist and the Technical Advisor for NASA’s Advanced Concepts Office with published works in science including Solar Sails: A Novel Approach to Interplanetary Travel and Harvesting Space for a Greener Earth);

The Gather of Sorrows by J.M. Sidorova (faculty member at University of Washington School of Medicine with a PhD in molecular genetics, who has publications in Clarkesworld and Asimov’s).

Though only a handful of these tales might be considered prophetic in nature given their insightful look at probabilities, they are all worthy of consideration when looking for fresh ideas in areas of expertise where most writers have to rely on outside sources and well established reference librarians. Without that, a few of these stories could have easily slid over into the Fantasy genre. And the fact that some of these writers found it necessary to publish their fiction under pseudonyms to help readers differentiate between their professionally published works of non-fiction and their speculative narratives is a testament to the scientific accuracy of these stories.

Each contribution in this collection is followed by an “Afterword” explaining the science and inspiration each individual author drew from as well as a few scientific asides of interest. These anthologies often spawn more questions and debates, so it’s refreshing to find additional conversational material to ponder beyond the fictional world that the reader experiences.

Science Fiction by Scientists: An Anthology of Short Stories is a fun collection of short stories that is bound to raise a few eyebrows in the science world and broaden the imagination of fans in the science fiction world.

Dr. Jeremy Stone: Do you believe in time travel? Dr. Angela Noyce: Sure! As much as I believe in Santa Claus and the Easter Bunny. That is just to say that I love the idea but I’m dubious about the reality. But I love the idea, I’m all for it! For some like me who […]