In this week’s viewing: Cheating Craft finishes up and Iron-Blooded Orphans soldiers onward. 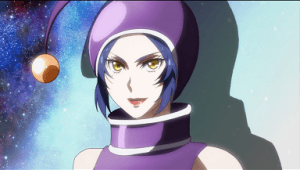 Cheating Craft finale – The Shokatsu Technique can do nearly anything, but it can’t help Mumei directly answer any test questions. So he faces his ultimate nightmare: trapped in an impenetrable forcefield with the only copy of the test, unable to get help from Kōi! And with the continued existence of all life on Earth hanging in the balance, because Miss Ō is an alien agent who has decided that the way to really light a fire under these lazy Earthlings is to de-orbit the Moon.

(Can I just note, for a moment, that beating up the Moon seems to be in vogue right now? Last year we had Assassination Classroom mostly destroying it right off the bat, and two of this year’s Hugo novel finalists were predicated on seriously unpleaseant things happening to it. I’m about ready for a story that shows some appreciation for the Moon and all the help it’s given us for millions of years, absorbing all those asteroid strikes and keeping the tides regular, and without one complaint ever.)

This sets up a grand finale allowing every single character who has appeared in the last twelve episodes to go piling in and save the world. Mumei is freed, Kōi solves the test, Mumei stops the machine and rescues the girl…though it’s a nice touch that this does not result in Haku automatically falling in love with him. She’s still interested in Kōi, as far as we know, and Kōi is still hoping for Mumei and Gennu to get together.

That was definitely a thing. It is not quite a thing that makes a coherent whole. There are too many loose ends and sudden jumps for that. But it contains a lot of good bits, enough for me to not regret the time I spent watching it. In fact, of all the adaptations I’ve seen this year, this is the one I’d really be interested in checking out the source material for, because I’m dying to know how much of this insanity was there to begin with, and how much was introduced by the adaptation. 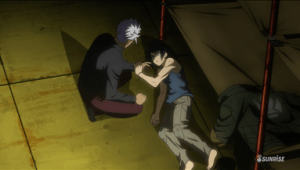 Mobile Suit Gundam: Iron-Blooded Orphans #38 – Sure enough, Mikazuki powers through the fight and takes down the ancient monster singlehandedly. The price is that he is now completely paralyzed on his right side when separated from Barbatos. He’s cool with that, since everything still works when he’s fighting. But those around him see a change that can’t be undone.

Orga, Atra, and Kudelia are all trying to come to terms with the fact that Mikazuki is losing his chance at the happily ever after they’ve been imagining for him. He may not make it to the end of the fight, and even if he does, he won’t be in any shape to work on the farm. (It’s an open question whether cybernetic prosthetics like Yukinojo’s would make any difference if Mikazuki is taking brain damage.)

A lot of people are worried about Orga, too. Merribit, Yukinojo, Naze, pretty much every adult around who really cares about him, are all trying to gently suggest that he ease back on the headlong rush to victory. Orga is becoming more aware of the burden of expectations he’s taken on, offering Barriston a chance to kick Tekkadan out of Teiwaz. (I guess Naze didn’t tell him about staking his life on Tekkadan’s success.) But he still seems unclear on just how much damage he can do to himself and his friends by taking this course and risking a tremendous failure.

And that’s where we leave the fall season. Next week I’ll give my picks for the best sf anime of the year, and we’ll pick up Iron-Blooded Orphans again after the January premieres.

Why Did Interactive Ebooks Never Catch On?