No more Walking Dead for me.

I largely came to this conclusion following the season 7 opener, the one in which Abraham’s and Glen’s heads were bashed in, Carl almost lost his hand and Rick was driven to a mental collapse.  I decided to see where they took things for one more episode before throwing in the towel.

I’ve two reasons for my disaffection;  first, I feel that the show has gone from toying with the characters to toying with the audience and second, no evil of any kind, let alone the disgustingly psychopathic evil possessed by Negan, should ever be presented on television with such joy, reverence and glee.

Negan’s on-air slaughter of two cast favorites was over the top, but not in the way one would come to expect.  We’ve come across evil in this show before – the Governor, the Wolves, the cannibals, but they were always clearly presented as evil foils to the main group’s essential good.  The Governor kept heads in a jar; the cannibals ate Bob alive:  these were all people who’d lost their essential humanity and deserved the fates meted out to them by Rick’s group who frequently make appeals to maintaining some central core of decency.

Negan smiles;  Negan clearly enjoys his role as high executioner; Negan is not an example of humanity gone bad (even for good reasons), he is pure, unadulterated evil.

But that alone would not have been enough to turn me off.  It is the loving, caressing, fully-approving manner in which he is presented by the show runners:  his group is successful because of its evil; his enjoyment of punishing outsiders is good because it maintains order and leads to successful survival;  so far, he has nary a flaw or chink that viewers can grasp ahold of to assure themselves that Rick’s group will manage to over come this too.

It is as if the show runners have decided that the only way for the story to go is to introduce a human horror that is more bad-ass than the zombie apocalypse.  This makes story-telling sense, but it does not have to be accompanied by an apparent approval, an almost gleeful descent into utter madness.

Which brings up my second reason.  I’ve frequently stated that one of the things wrong with many SF films is that the director and script writers do not trust their audience enough.  As one example, Quentin Tarantino respects his audience. The non-linear presentation of the story arcs in Pulp Fiction is a perfect example of taking the risk that the audience will go along with you if the story itself is compelling enough.  Far too many SF films don’t do that; they descend into featuring cutesy plush toys as a substitute; sometimes they put that distrust right up on the screen, like Avatar’s “unobtanium” (not to mention the whole “white man saves natives” story arc). 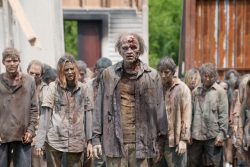 The Walking Dead show started out trusting its audience, an audience that would, for example, not like to see the death of favorite characters, but could understand the story-telling purpose as a necessity of conveying how terrible and arbitrary the world the characters inhabit is.

But then I believe the show’s relationship with its audience changed.  The audience’s faith in the show turned into a seeming belief that the show could be made to toy with the audience, to push the audience as far as it could be pushed, and then go beyond that.  Almost as if they’ve decided to see if it is possible to chase their audience away.

This week’s latest episode was proof of that idea so far as I’m concerned;  season 6 ended with the worst of all possible cliff hangers – which favorite character would be slaughtered in glorious technicolor.  That was answered by slaughtering Abraham (Glen and Abraham were the two “most likely to” in viewer polls, followed closely by Maggie);  the subsequent slaughter of Glen – clearly the favorite of the two most likely – was delayed, allowing the audience to believe, for about a full half hour, that Glen would be spared.  Losing Abraham was bad enough, but it turned out only to be misdirection for Glen fans.  Disgusting.

And they did’t kill Glen off easily;  they lingered over it, twisting the knife.  It would not have surprised me if it had been accompanied by text stating “if we can get away with doing this, we can get away with doing anything”.  Why not just torture puppies and kittens for an hour?  It would be cheaper, production wise.  They could give them cutesy names, show them being playful, happy, rambunctious baby cats and dogs, and then have the audience vote on which ones get the axe.

Was this sequence of events, this teasing and excruciatingly drawn out assassination deliberate?  I think so, and I think changing focus to Morgan and Carol for the entirety of the second episode, not allowing the audience to commiserate with the remaining survivors, was more deliberate twisting of the knife in the audience’s back.  What’s next after Negan?  A survivor colony having sex with zombies?  Abu Gharaib style water tortures?  Visiting the capital and killing congressional zombies?  Bill Murray?

The Walking Dead’s show runners have now demonstrated that they believe they can do and get away with anything with this show;  beyond making me personally disgusted with the whole thing, it also portends the show’s decline:  author’s with no constraints typically turn out bad story, and I don’t need to be around to watch it.