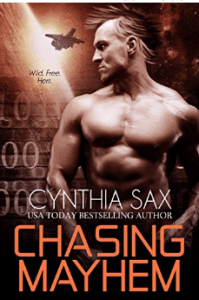 More new releases in the world of science fiction romance to share today! As always, I recommend sampling for yourself before buying.

A lot of readers have been waiting for CHASING MAYHEM (CYBORG SIZZLE BOOK 6) by Cynthia Sax and were happy to snap it up this week. Cyborgs are currently (maybe always?) very hot in science fiction romance.

Here’s the story: Mayhem has spent his lengthy lifespan obeying the Humanoid Alliance’s rules. Finally free from their cruel control, the cyborg warrior plans to cause chaos. He infiltrates a remote settlement, provokes the savage locals until they want him dead, and allows himself to be captured by the sexiest little Retriever he has ever laid his mechanically-enhanced eyes on.

Imee’s sole mission in life is to keep her family alive. To do this, she must hunt rebels, returning them to the Humanoid Alliance’s evil clutches where they will be executed. She doesn’t allow herself to feel anything for her targets…until she meets a tall, muscular cyborg with wild hair and even wilder eyes. 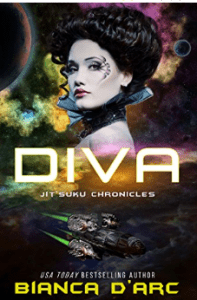 DIVA (JIT’SUKU CHRONICLES) by Bianca D’Arc looks amazing, all the right elements. It’s sitting on my kindle, waiting To Be Read:

She needs only one name…Diva.

Galactic superstar. Brilliant musician. Chanteuse extraordinaire. But she has a number of deep, dark secrets. For a woman who lives her life in the spotlight of a billion lenses, she’s managed to lead a double life, full of intrigue. When her path crosses that of Captain John Starbridge everything changes. Here is a man who sees beneath the mask she wears for the public. Here is a man in love with the woman behind the music into which she pours her soul. Here is a man who could be hers…if they didn’t both have duties that must be fulfilled.

A Special Forces hero who sees the woman beneath the facade…

John’s allegiance has always been to the human race and his band of Spec Ops brothers, but Diva’s music has accompanied him on every deep space mission he’s ever undertaken. Her voice croons him to sleep in his lonely bunk each night and her intense lyrics haunt him throughout his days. When he finally meets the object of his fascination, he realizes there is even more depth to her than he expected. He gives her his heart, though he knows it’s likely a futile gesture. What would a superstar like her want with a plain old soldier like him?

A galaxy in peril…

Circumstances throw them together and tear them apart, while enemy forces gather to invade the galaxy they both try — in their own ways — to protect. She will have to walk into the lion’s den in order to save the galaxy…and perhaps, the man she loves. If there’s a way, she’ll find it, but it might just be the mission that finally breaks them both once and for all. 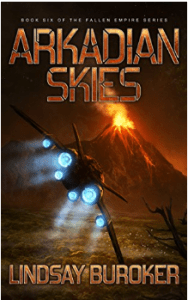 I always snatch up a new release in Lindsay Buroker’s Fallen Empire series (which technically is more science fiction with romantic elements but extremely satisfying to many of us in the SFR readership). The story for ARKADIAN SKIES, Book 6 in the series:

With the man who kidnapped her daughter imprisoned aboard her ship, Captain Alisa Marchenko is closer than ever to reuniting her family. But her new guest has been in a coma for weeks, with the secret to her daughter’s location locked away in his mind. She must find a way to sneak him into a state-of-the-art hospital on Arkadius, a planet in the heart of Alliance territory. Not an easy task when she and the cyborg Leonidas, her most trusted ally, are wanted by the Alliance army.

As if that mission weren’t daunting enough, the Staff of Lore has appeared on the planet. As has the man who stole it: Alisa’s father.

One that immediately hit the top of the SFR Best Seller lists was BARBARIAN’S TAMING (ICE PLANET BARBARIANS) by Ruby Dixon. Readers can’t seem to get enough of the sexy blue barbarians in Dixon’s universe.

The story: As a newcomer to the alien tribe, I’ve struggled to find my place. It might be because I’m a tad headstrong at times. And yes, I might have thrown a few things at people’s heads. But I had a good reason to pitch a fit — my shy sister was stolen away right under my nose. Of course, now she’s back and mated. Everyone’s happy…except me. 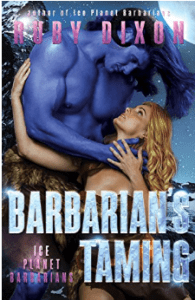 Strangely enough, the only person that I think understands what I’m going through is the same blue-skinned brute that stole my sister. It’s wrong to hook up with him, even as a mindless fling.

Except…I’m not so good with the whole ‘rules’ thing.
And he’s not so great with the ‘fling’ thing.

And finally for this post, ALIEN PALADIN’S WOMAN by Vi Voxley. Reviews mention this book has more of  a science fiction feel than some of her others, contains violence, a reincarnated monster named Fearless, and a Happily Ever After ending.  Vi is a perennial, reader pleasing best seller in the SFR world.

The story: Tieran, the Commander of the Palian paladins, has never been allowed to have anything of his own, other than the blade in his hands and the honor he serves with. But a feisty, curvy, and utterly impossible human woman is about to change all that. He never thought that he’d desire something or someone as much as he needs her and nothing will take her from him. Even if he has to slay the most feared enemy ever known for her. 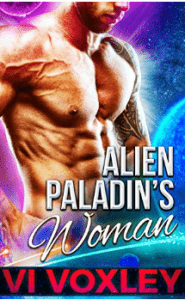 Audrey Price has seen a lot of hard work and cold times as a governor of ice planet mining colonies. She never expected to be in the middle of the greatest hunt in the galaxy, though. One moment, she was protecting her miners from an alien threat, and the next moment, she’s tied to said threat, with only one man capable of keeping her and the rest of the universe in one piece. The sexy, infuriating paladin who makes her core pulse as hard as he makes her want to wring his neck.

Coming to grips with the fact that she’s the key to tracking down one of the most mysterious and horrible races known is no easy feat, but that’s nothing compared to dealing with the fact that she might be falling for the paladin. And when all eyes are on them, including a pair that can see through space and leave havoc in its path, Audrey and Tieran are in the fight of their life.

Not only for their own safety, but for that of the galaxy as a whole.

What new science fiction romance books were you happy to see recently?

Neom, megacity with its own moon, dinosaurs, and robots, reaches next phase

A Rant on Goodreads