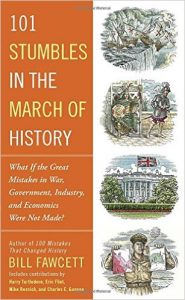 Title: 101 Stumbles in the March of History

101 Stumbles in the March of History: What If the Great Mistakes in War, Government, Industry, and Economics Were Not Made? by Bill Fawcett is a book written for alternate historians. Don’t get me wrong, I’m sure the publisher wants to reach as wide an audience as possible (and the book is good enough to do just that), but alternate historians are the audience that needs to read this book. This is a book for them.

Anywho, 101 Stumbles is a collection of essays mostly written by Bill Fawcett, but with several other contributors including noted alternate history/SF writers like Harry Turtledove, Eric Flint and Mike Resnick. As the title suggests, the authors discuss famous historical mistakes such as the Aztec’s indecisiveness over what do with the Spaniards or General MacArthur’s complete refusal to see that the Chinese were getting ready to intervene in the Korean War, with the earliest mistakes coming first in the book. Thus, an alternate title for 101 Stumbles is “The Big Book of Hindsight”, but to be fair Bill admits early on that they are aware of this and are using these mistakes as a teachable moment for the present and future.

As mentioned earlier, 101 Stumbles is a collection of essays, which makes it more of a counterfactual history, which is the scholarly side of the alternate history genre. The one exception is “Divine Calm” by Charles E. Gannon which is actually written like a traditional short story and where the Mongol army that invaded Japan in 1274 doesn’t withdraw and gets caught in a typhoon. Flash forward to the 19th century and America has “opened” a very different Japan, one that is a rebellious province of China that is kept isolated from the rest of the world to prevent foreigners from assisting the seditious Japanese. It was actually an interesting story to read and I highly recommend it.

As for the essays themselves, the majority were well-written and researched, but the star in my opinion was William Terdoslavich. His contributions were the best organized and were, I believe, the only essays to use sub-headings to break up the different parts of his argument. I especially liked his look at how Boston used to be a center of high-tech development…until mistakes by the city’s leading companies ended their chance to compete with Silicon Valley. In fact that highlights something else I really liked about 101 Stumbles. While war and politics are covered in many of the essays, the contributors weren’t shy about talking about other topics, such as an amusing essay by Bill that told us about the mistake that led to chocolate chip cookies.

101 Stumbles did have some problems. Some of the more modern mistakes covered dropped the neutral tone most of the essays went for and became very political, including one which referenced the belief that global warming is a vast conspiracy (sigh). There were also some odd wordings that may have been typos, but I can’t confirm if my copy was an advanced proof, so you might see them, too. My biggest issue, however, was the lack of a table of contents. I didn’t realize how annoying this was until I tried to track down specific essays I enjoyed and instead had to waste time flipping through the pages until I found the right one.

That being said, I can still recommend 101 Stumbles. Many of the mistakes that Bill included are some of the most popular points of divergence in the alternate history community. I can even see some of the answers given by our cadre of historians leading to some pretty intense online discussion that would be fun to read (until someone gets banned by making it political or preaching their pet conspiracy theory). Although it does have some flaws, if you are a fan of history then you should pick up a copy of 101 Stumbles in the March of History.