In 1959, NASA announced the names of seven astronauts selected to fly in the Mercury Program, the United States’ first attempt to launch humans into space. These pioneers, all men (nicknamed “The Mercury 7”), were Gus Grissom, Alan Shepard, Scott Carpenter, Wally Schirra, Deke Slayton, John Glenn and Gordon Cooper.  Every one of them made it into space. 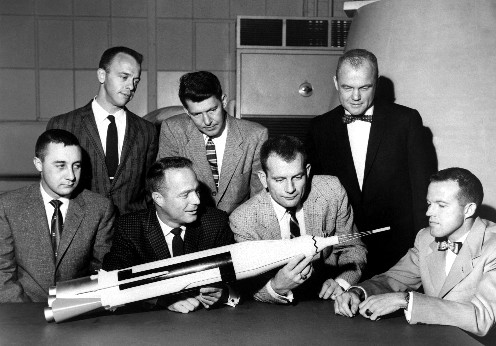 In 1960 and 1961, thirteen highly experienced women aviators were also selected to undergo a series of tests designed by NASA to determine the physical and psychological fitness of astronaut candidates for spaceflight.

You probably don’t recognize their names. None of them made it into space. In fact, none of them even became astronauts.  In 1962, the U.S. Congress convened a special subcommittee of the Committee on Science and Astronautics to look into NASA’s inaction in accepting these women, but to no avail.  It was not until 1978 that NASA finally accepted women into the astronaut program.

Over the intervening years, the reported refusal by NASA to admit any one of these original thirteen women into the corps of astronauts has been denounced by many outside the agency as an example of the rejection of highly qualified women because of deep-rooted sexism and the “good old boy” culture that pervaded NASA in those days.

Books have been written, one as recently as 2009, chastising NASA for its shortsightedness in secretly training these thirteen women and then abruptly cancelling their program, unfairly denying them access to space. Major television and news outlets have featured their stories even as recently as this year.

While in retrospect it is fair to fault NASA’s leadership in 1962 for not viewing women as the equal of men in the ability to perform physically challenging tasks (it was, after all, another two years before even the Civil Rights Act of 1964 became law), few of the rest of the criticisms in those books or news reports has merit.

There was no “secret” astronaut training program for the thirteen conducted by NASA or anyone else. In fact there was no NASA program, or even an initiative, to consider women as astronauts in the 60s.  The evaluation of these women for fitness as astronauts was an effort undertaken by a private citizen with no government personnel, funding or support involved.

The Mercury 13 women’s physiological and psychological medical screening exams were conducted by an independent researcher named William Lovelace who, under contract to NASA, had helped develop these same tests for NASA’s male astronauts. Lovelace wanted to know how women would perform taking these tests, and he acquired private (but not secret) financing to identify and select these thirteen women aviators as subjects for his research.

When he discovered how well they could compete with men in these areas, he approached the US Navy’s Pensacola flight training center with a request for additional astronaut screening time at the air base.

The Navy asked Lovelace for his Government project funding number and the name of his NASA contact so that they could proceed. He admitted he had neither and he withdrew his request.

He cancelled his research and that was the end of The Mercury 13 attempt to join the ranks of NASA astronauts.

Several of the thirteen did appeal to Congress to have NASA open its doors to women, but that didn’t happen.  In 1961, the principal qualification demanded for a pilot to become an astronaut in the Mercury Program was extensive test pilot experience in military jets. In 1962 women were not admitted to Air Force training schools, so none of these women (or most male candidates, for that matter) would have made the cut.

We can criticize NASA for not selecting women until 1978. But those reports suggesting that this NASA astronaut training program was cancelled because “chauvinist pig” politicians “pulled the plug” on NASA’s funding for their program is wrong (and easily fact-checked). Regardless of the politicians’ attitude toward women, there was no program for Congress to cancel. Lovelace ended his research project himself.

The highly respected space writer James Oberg wrote an enlightening and highly engaging “reality check”, separating fact from popular media fiction for these 13 women, in an article titled The Mercury 13: Setting the Story Straight in The Space Review, May 14, 2007. I recommend you follow this link and read it.

This is not to take away from the extraordinary qualifications of these thirteen experienced women aviators. In fact, the sensationalized spin of their story diminishes their many real accomplishments, which include turning a spotlight on the inequity of how women’s roles were viewed by NASA, and by the American public at large, in those days.

They were pioneers in the effort to dismantle that stereotype, and they accelerated NASA’s views on it.  The leader of The Mercury 13, aviator Jerrie Cobb, was appointed consultant to NASA Administrator James Webb to focus on getting women into space.

The first class of astronauts NASA selected following the Apollo era was in 1978, and at long last six women were among the thirty-five astronauts chosen.

In 1995, Space Shuttle Astronaut Eileen Collins, the first woman to pilot the Space Shuttle, formally recognized the contribution of The Mercury 13 by inviting seven of the surviving members to attend her launch on STS-63. Collins also carried mementos of the thirteen women with her into space.

Eileen Collins later became the first woman to command a Space Shuttle mission with the launch of Discovery on STS-93 in 1999, and she commanded Space Shuttle Discovery a second time on STS-114 in 2005.  It took a long time to turn things around, but Eileen Collins finally validated the quest of The Mercury 13.