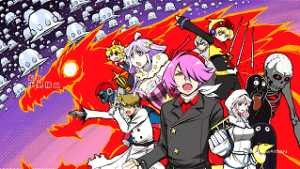 Concrete Revolutio finale – The Superhuman War is something of a sideshow– sure, a secondary character is offed and a whole lot of skyscrapers get smashed up real good, but it’s largely irrelevant to what Concrete Revolutio wants to talk about. To get at what it does want to talk about, please permit an extended digression about the most famous kaijū of them all.

Jirō is not the first character conceived as a monstrous personification of the atomic bomb; that honor belongs to Godzilla. The first Godzilla is a very serious movie which is in many ways about the experience of World War II within Japan: an unstoppable force awakens far away in the Pacific, the military claims it totally has the situation handled, but it eventually overwhelms everything conventional war machines can throw at it and wreaks devastation on an unbelievable scale.

Godzilla was such a huge hit that the studio boss immediately wanted a sequel. The franchise made a quick descent into the cheesiness that kaijū movies are known and loved for. And then Godzilla became, over time, more of an ally to Japan. By his fifth movie, he was being deployed to protect the world against worse threats, and later he became outright friendly and lovable. There was even a short-lived cartoon about him constantly coming to the aid of a research ship.

And then there are the more obvious parallels: the monster in both Satomi’s movie and Michiko’s planned sequel does look a tad familiar, doesn’t it? And the Bio Destroyer surely owes something to the Oxygen Destroyer that killed Godzilla in his first movie.

The other work important to understanding the ending is Watchmen. As I’ve said before, Concrete Revolutio has a lot in common with it, being about shredding the Four-Color Ethos, but doesn’t come to the same nihilistic conclusion. Satomi is reciting the moral of Watchmen there at the end– superhumans can’t be trusted and humanity is screwed as long as they’re around. But Concrete Revolutio still says no, just because the world is complicated doesn’t mean you should give up trying to do the right thing. Of course, it also says in the end that sometimes, there really is an outright villain who needs to be socked in the jaw.

In short, if you want to picture the future of the Shinka timeline, imagine Godzilla stomping on Alan Moore forever.

This was an excellent show. The only thing it leaves me feeling sad about is that it will always have a limited audience. To be able to understand it, one has to have at least a passing acquaintance with some of the major icons that it’s riffing on, which rules out practically everyone outside Japan, and an ability to handle the non-linear storytelling of the first half, which rules out practically everyone outside sf fandom. But I hope it reaches every single person that it can. May it have a long career in critical studies, and at least one huge compendium explaining every last reference to fiction and reality. Because I want to read that. 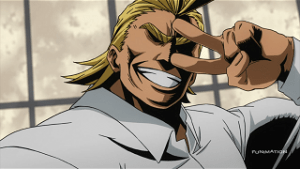 My Hero Academia #12 – Once again, All Might shows that it’s not about the power– though being able to level up seemingly arbitrarily is a pretty nifty power– but knowing how to use it for best effect. Sure, he’s basically Superman, but he couldn’t have beaten Anti-Superman without being able to quickly understand how his opponent’s power works. This is the sort of thing that sets a really good shōnen story apart from one that just about people beating the crap out of each other.

So that leaves Too Many Hands Guy, one minute to go, and no clues about how he or his Quirk work other than he was awfully upset about losing contact with one of the hands for a moment. All Might is trying to negotiate his way out of this, but I think this will be where the students will really need to step up and help out.

Izuku and Katsuki will probably have to work together on this one, but Katsuki’s a long way from losing his attitude and I expect they’ll be back to being rivals for a while afterward. 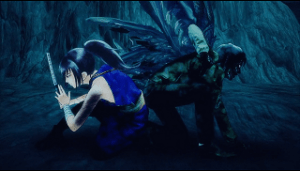 Kagewani -II- #12 – The mysterious lady who I hope tells us her name soon is having a change of heart, seeing Bamba able to work with the kagewani and remembering that it seemed to retain a trace of her father’s personality before. And realizing that Kimura is even crazier than she is.

Yes indeed, Kimura has been biding his time and waiting for a chance to collect his own kagewani. He’s been paying close attention to what Bamba and Kai have figured out, so that he can imprison and control it rather than have a symbiotic relationship with it, which, given that the first kagewani is now trying to convert Bamba’s body into its own fully physical form, is probably a smart precaution to take.

With one episode to go, will Bamba and the mysterious woman be able to stop Kimura? I’m thinking no. I’m kind of hoping no, actually, because I’d really enjoy another season of this. 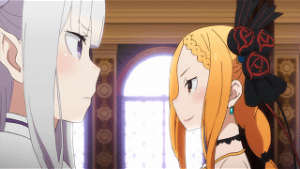 Outside of Subaru being a blundering idiot at length again, the apparent purpose of the episode is to set the stage for the next time loop by introducing a whole new cast of queen candidates, men-at-arms, sages, and the catboy who does not care about felinonormative assumptions. Also there’s some mention of how the deal with the dragon works; the dragon issues commands or prophecies of some sort and presumably the kingdom has to follow them, or else.

If Roswaal is scheming against the dragon, then whoever or whatever has been trying to interfere with the selection might be allied with the dragon, which could be awkward as the contract with it has been presented as a generally good thing, and Subaru is helping out the guy who wants to kill it. But maybe it will turn out the dragon is a horrible tyrant or something. 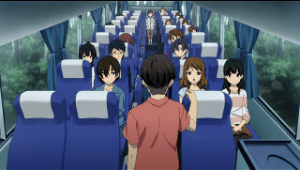 The Lost Village finale – Thanks to a final burst of plot contortion, The Lost Village ends as it began: on a bus ride to who knows where, desperately trying to interest us in the two blandest characters available.

I would’ve liked to know more about almost anyone except Mitsumune and Masaki. Or less. With only 12 episodes, it would’ve been perfectly excusable to leave some characters as just faces in the background, but by trying to give nearly everyone a moment, this show managed to hit the sweet spot of too many characters and not enough time.

There were a few great character moments, but none involving the alleged protagonists, a few pretty awesome CGI monsters, and consistently great music. Other than that, it’s been a waste of an intriguing setup.