Steampunk, off the beaten path. 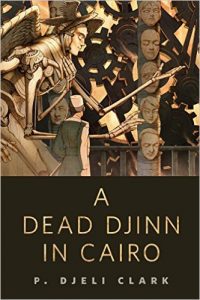 Sometimes you’re hungry enough for a big meal that takes time to both finish and enjoy. Other times all you want is something bite-sized and easy to digest. Novels and short stories are like that. Neither is superior to the other, but when you are in the mood for one of them, the other just won’t do. Having read several long novels recently, some even part of larger series, I decided it was time for some short and self-contained stories. With that said, lets take a look at “A Dead Djinn in Cairo” by P. Djeli Clark.

In this timeline, several generations ago an Egyptian alchemist broke a hole through the space between worlds allowing magic, djinn and angels to enter ours. By 1912, Egypt is a kingdom and a great power, having kicked out the British. Cairo is a major city where advanced, steam-powered technology lives along side otherworldly beings and alchemy. Our heroine, Fatma el-Sha’arawi of the Egyptian Ministry of Alchemy, Enchantments, and Supernatural Entities; is tasked with helping the Cairo police figure out who murdered a djinn found dead in his home. In her quest to solve the mystery, Fatma will run into mechanical angels, flesh-eating ghouls, secret pagan societies and a conspiracy that will spell doom for all.

You really can’t get more steampunk than “A Dead Djinn in Cairo”. It has anachronistic technology, magic, Lovecraftian horrors, a minority character bucking the social and cultural mores of her time, implausible divergences from history…and, of course, airships. Admittedly, Fatma is no Sherlock Holmes. The mystery is solved more because Fatma was in the right place at the right time and was assisted by helpful secondary characters who could point and tell her “go here to prevent utter disaster”, rather than her powers of deduction. Then again I actually liked the RDJ Sherlock Holmes film (the first one, the sequel was just a regurgitation of LXG), so who am I to complain about that.

Still Djeli gets points for setting a steampunk story someplace other than Victorian England or the Wild West. Plus how many speculative fiction stories ever mention Coptic Christians? A lot of authors tend to treat the Middle East as homogeneously Muslim and even then they ignore the divisions between that religion (Sunni, Shia, Alawites, Ibadism, etc.). Still being a woman in that culture, even the relatively more socially liberal Egypt of “A Dead Djinn in Cairo”, can be harder then a woman in your average steampunk story setting and I feel Djeli did a good job portraying this.

Also I should stop and say that the cover art created by Kevin Hong is gorgeous and fits the events in the story well. Kudos to him.

If you like steampunk set in locations often forgotten about by the modern speculative fiction authors, then you will enjoy “A Dead Djinn in Cairo” by P. Djeli Clark. What it may lack in the mystery department, it more than makes up for with good world-building and entertaining action. Although I said earlier I wanted to read self-contained stories, I wouldn’t say “boo” to seeing another adventure set in this world.

This week, Steve reviews the July-August F&SF, and stumps for your votes (Canadians only!) for the Aurora Awards.

Resistance of the New