Hello and welcome to JUDGING BOOKS BY THEIR COVERS!

You all know how to play this game, I pick a book and talk about the covers of different editions, judging each by their merits as art and how well they represent (or don’t represent) the book that it covers.

Today, though, I’m going to do it a little diffrently. I’ve picked a book, but for a change it is one that I have never read and am almost completely unfamiliar with.

I know nothing about the book Star Guard beyond the fact that it is a science-fiction novel written by Andre Norton. According to Wikipedia, Star Guard is an example of military science fiction, and it displays Norton’s deep understanding of ancient history.

Now, I love Andre Norton but I have to admit that I have read few of her books, although her Dread Companion is one of my favorites. Andre Alice Norton wrote both fantasy and science fiction and had several series. One of those series is the Central Control series of which Star Guard is one of the two books in that series.

Beyond that I know nothing. So let’s look at the covers 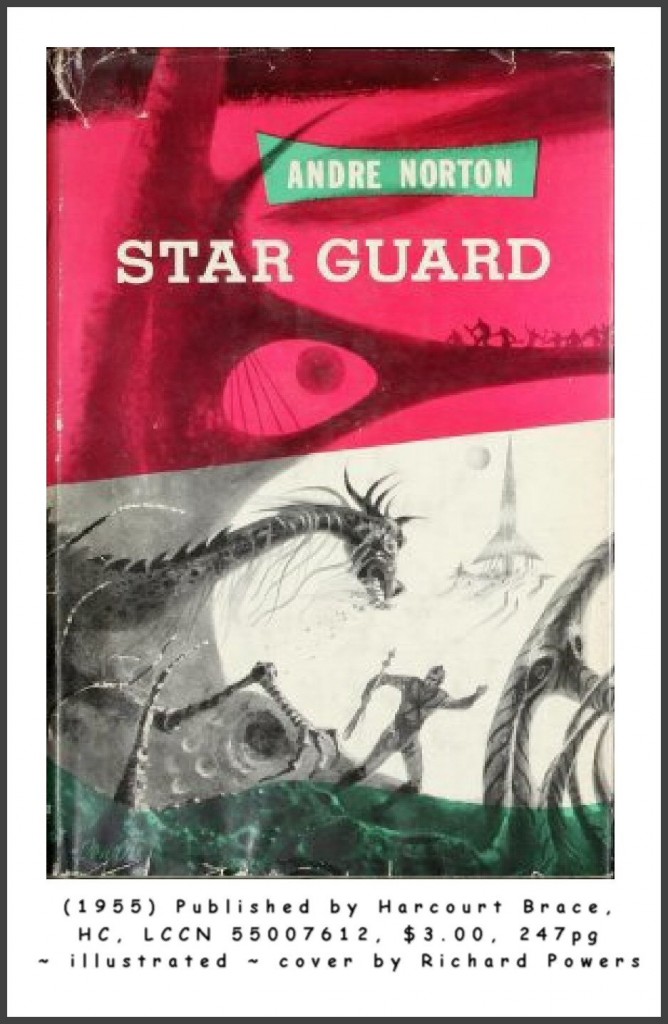 The first edition of the book was published in 1955 by Harcourt, Brace & Company in a hardcover edition featuring cover art by artist Richard M. Powers. The illustration is black and white with only some spot color – a maroon and a kind of a teal green – overlaying the grayscale image. The image depicts a space-suited figure encountering a dragon-like creature. The man’s rocketship stands in the background and above, on a weird, alien structure, vague. armed figures approach.

Is the dragon creature attacking the spaceman? Is this the moment of shock before fight-or-flight kicks in or are the spaceman and the dragon engaged in an amiable chat? No idea, but the image intrigues enough to make me want to plunge in and find out, so… kudos there. 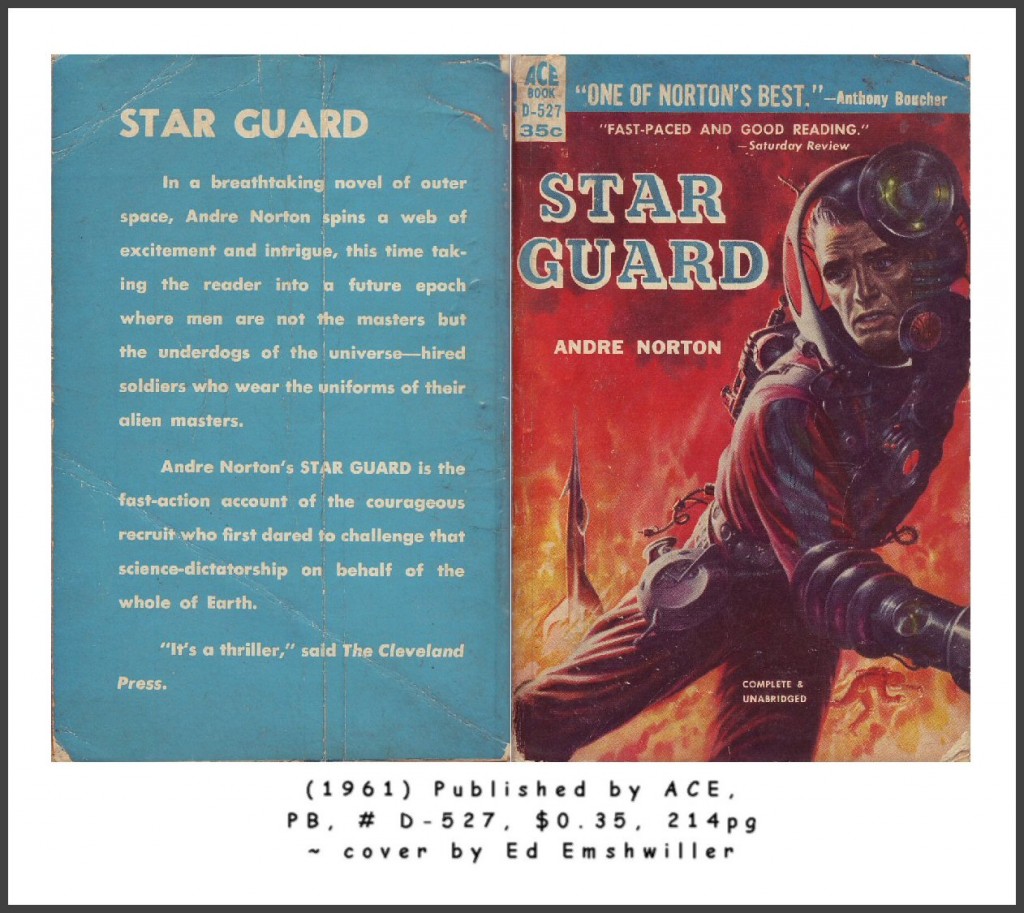 Next we have a 1961 edition from Ace featuring art by Ed Emshwiller. This cover was originally part of an Ace Double Novel, but it looks like it was relased on its own at some point. Typical Emsh cover, though still exciting. The red color in the background and the fire orange at the bottom contrast with the cool blues of the spacesuit on the astronaut who is on the run! Lots of movement here. A sleek rocketship blasts off in the background (I assume that’s what it is doing, anyway, causing all the fire which has the spaceman running away to escape the fate of one of his companions who is being flung into the air by the blast.) A very exciting cover that promises exciting space adventure. What more could you want? 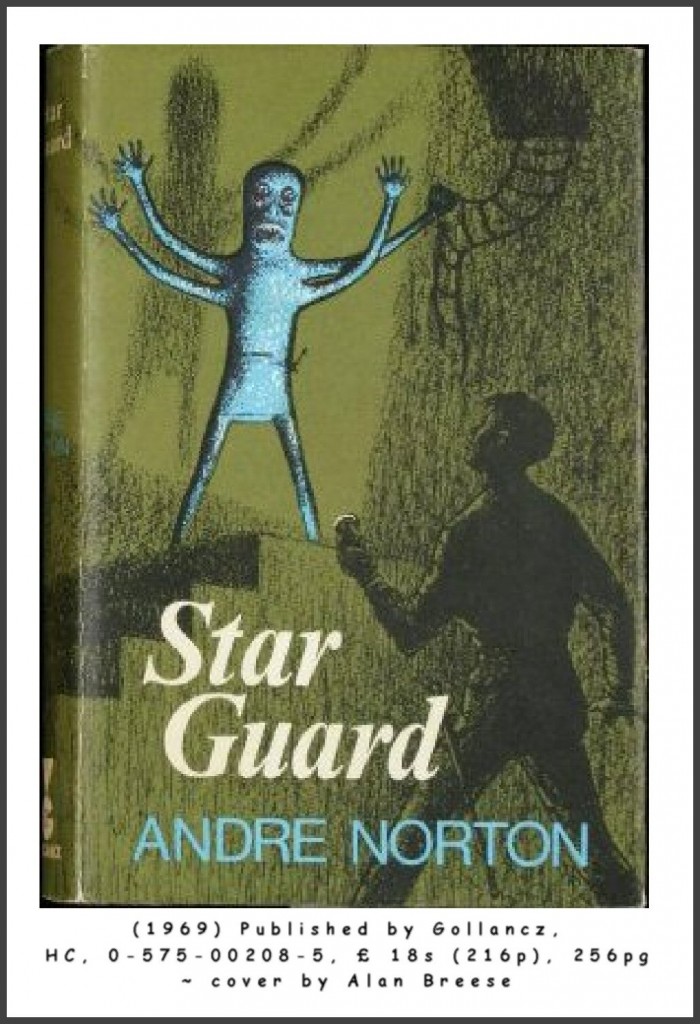 Here is an interesting edition from Gollancz in 1969. It is a hardcover and, again, the image is a black and white illustration by artist Allan Breeze overlaid with a dark green and lighter blue colors. Here a blue, four-armed alien at the top of some stairs seems to surrender to a young man holding a flashlight which catches the creature in its beam. Somewhat intriguing, but not as exciting as the Emsh cover. Looking at this I would likely mistake it for a juvenile science fiction book (that is, a book meant for younger readers, what we call a YA title today). 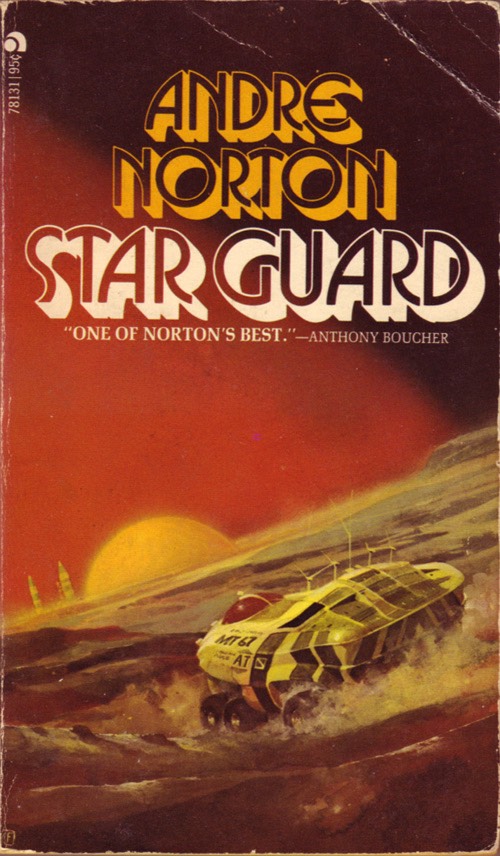 A 1973 paperback edition from Ace books has a great cover by Chris Foss depicting some sort of vehicle trucking along the sands of an alien planet towards two towers in the distance against a setting alien sun. It’s a great cover but it doesn’t say much about the book itself other than “Hey! Science fiction book! You know you love the Sci-fi! Buy me!” 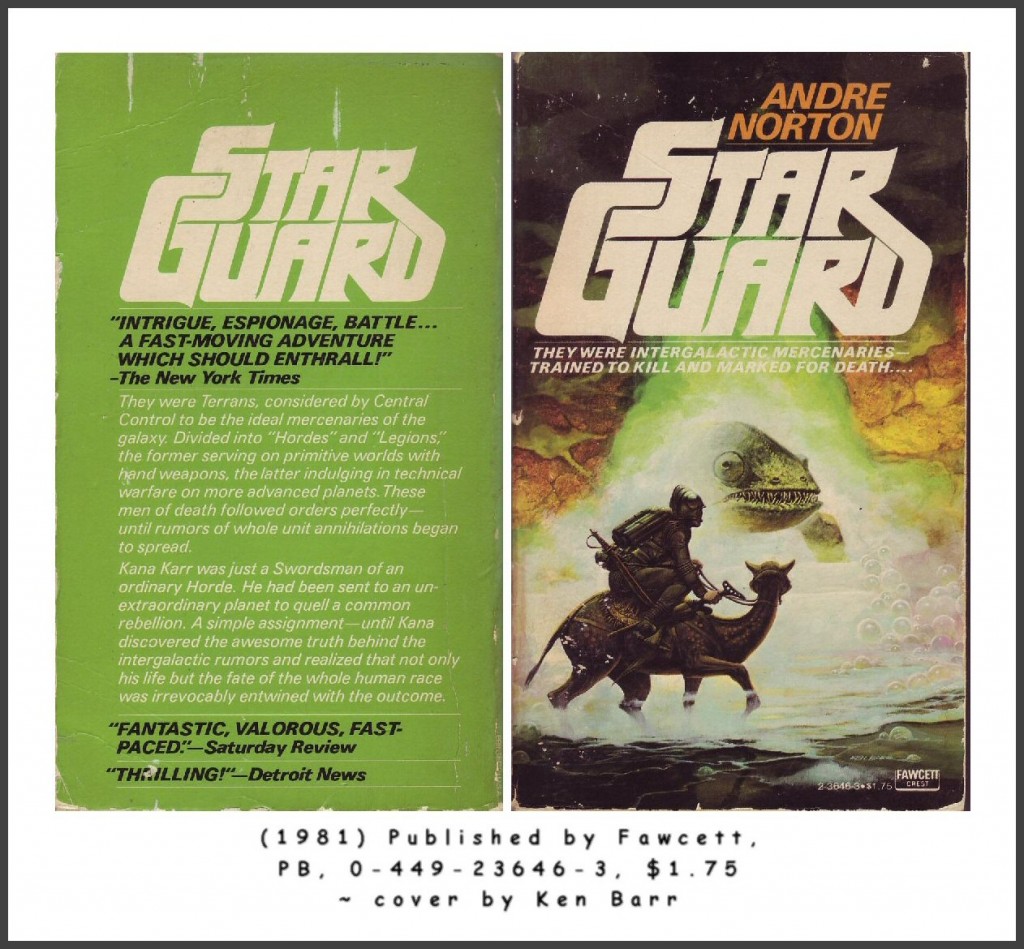 Here is another edition from Fawcett. This one is from 1981 and features artwork by the late Ken Barr. Here a suited creature rides a strange creature through murky water and suddencly encounters a fearsome looking beast. Is this the same as the dragon beast depicted in the Richard Powers art? Could be! A solid cover. 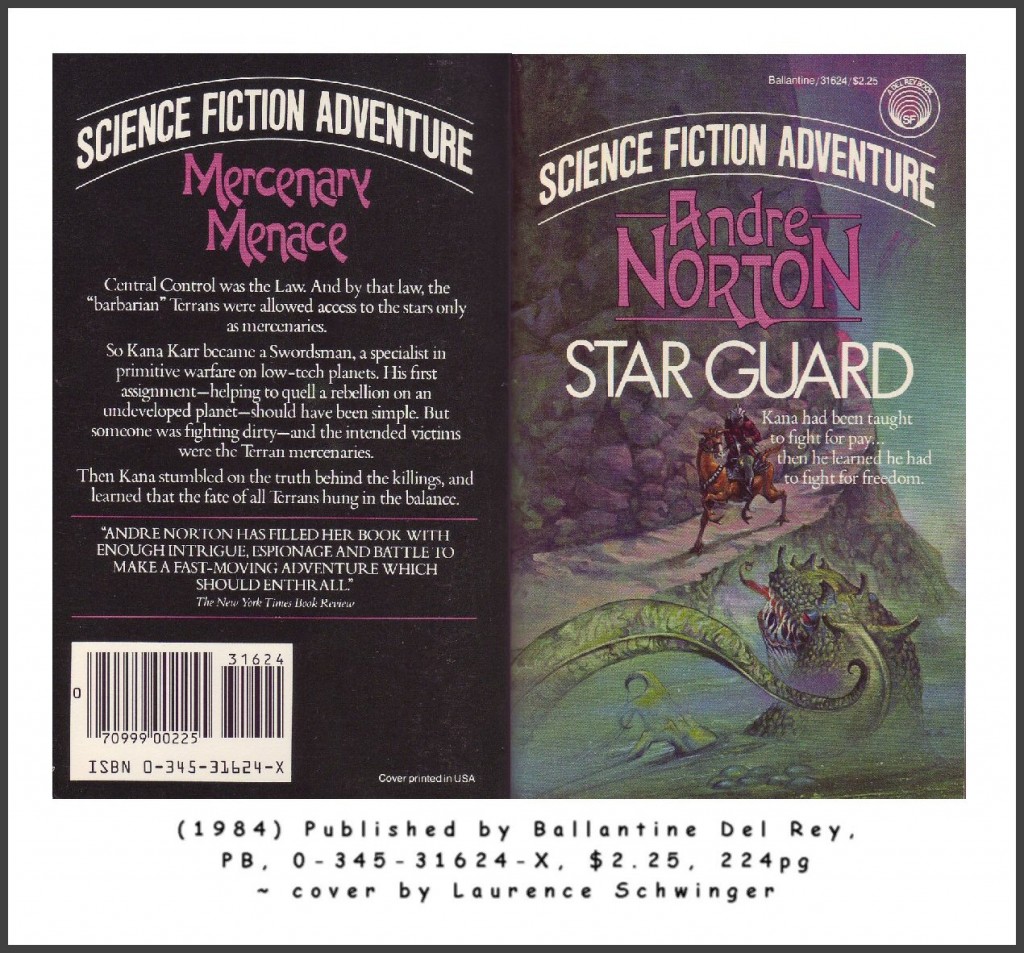 A 1984 edition from Ballantine Del Rey has artist Laurence Schwinger doing his take on the same scene. Here the suited figure riding the strange beast is above the dragon creature which rises from the watewr balow. Interesting but not nearly as impactful as the Ken Barr version. This edition makes the book look more fantasy than science fiction. 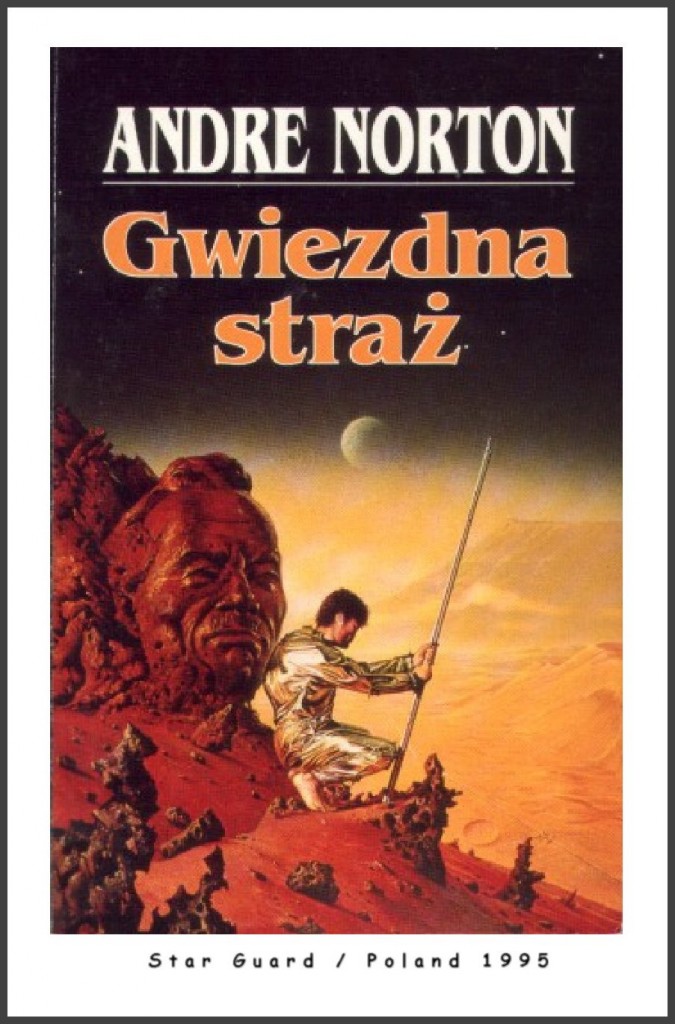 Finally, here is a pensive cover from a Polish edition released in 1995. I do not know who the artist is here, but he or she depicts a space suited figure hunched down against a carving of a human face overlooking a desolate alien landscape. While certainly intriguing, there is not much in the way of movement about the image, but it is unmistakably a science fiction image appropriate for a science fiction book. The spaceman seems lost on an alien world. Or is it the Earth after a major cataclysm? You’d have to open the book to find out.

Have you read the book? Do these cover do the story justice? Let me know in the comments. Tell me which one you think captures the essence of the story best.

Hitchhiker’s combined Pythonesque comic fantasy with an intellectual rigour that many ‘serious’ SF writers could learn from.

Science Fiction is frequently accused of being a genre that’s too much about gadgets. I tend to think that we focus on the wrong gadgets, and that’s why that generalization is made.