Home Review Book Review: The Ear, The Eye and The Arm by Nancy Farmer 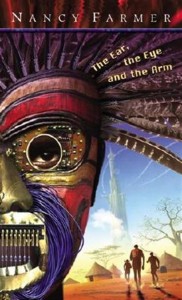 Diversity is very much a buzzword these days in the worlds of speculative fiction and young adult fiction. Readers increasingly want to see a wide variety of cultures and experiences depicted in the pages of the books that they read. With that theme of diversity in mind, we’re going to take a look at one of the most famous young adult speculative fiction books that’s set in Africa…and written by a white woman. To be fair though, Nancy Farmer did live in Mozambique and Zimbabwe for seventeen years. Today we will be reviewing The Ear, The Eye and The Arm by Nancy Farmer.

The book is set in Harare, Zimbabwe in the year 2194. Zimbabwe has grown into a first world economy and is a major player on the world stage. It has had some trouble with gangs, but that’s mostly behind it now thanks to the work of General Amadeus Matsika. The General’s three children Tendai, Rita and Kuda have spent almost their whole lives on the grounds of their family’s fortified mansion. One day they decide to sneak out to earn their scout badge for exploration, but it isn’t long before the children are kidnapped.

In order to find the children General Matsika hires a trio of mutant deceives named Ear, Eye and Arm. Ear has super-hearing, Eye has super-sight and Arm has telekinesis that allows him to feel the emotions of other people. Together the three detectives must make their way across the futuristic city of Harare and find the Matsika children before time runs out.

It’s very rare to see science fiction novels that are set in Africa. Granted, that’s starting to change thanks to the growing prominence of Nigerian science fiction writers. For the moment though, African based science fiction still remains something a rare bird. So it was a pleasant surprise for me to have found this novel. The history, traditional culture and mythology of Zimbabwe all play major parts in the plot. It’s all very well researched and you’ll probably wind up learning a lot about all three of the above mentioned.

The world building in this book is absolutely top-notch. You really get a sense that 22nd century Zimbabwe is a land where ancient traditions exist side-by-side with futuristic technologies such as robots and flying cars. Zimbabwe seems to have experienced something of a cultural renaissance. For example, the primary religion of 22nd century Zimbabwe is based around the traditional gods and spirits. One thing I found interesting was that the characters only remembered English as having been used in the colonial days of Zimbabwe. That and certain other details seem to suggest that the English speaking world has fallen from prominence. It would seem that the 22nd century is a world turned on its head.

The novel is primarily a coming of age story for Tendai and his siblings. However, all of the major characters experience growth and development to some extent. Even seemingly minor characters experience change and there is an epilogue at the end of the book that lets us know how they’re all doing. The book is evenly split between the adventures of the Matsika children and the investigation of the three detectives. So even those of you not normally into YA might find something to enjoy in this novel.

One thing I founds interesting was that all of the places the Matsika kids went to could be viewed as metaphors for the various points in Zimbabwe’s history. In that regard, you could almost consider this book an unconventional time travel story of sorts. Harare, from the vibrant Mbare Musika marketplace to the Mile-High MacIlwaine hotel, represents 22nd century Zimbabwe and the hope for the future. Dead Man’s Vlei, a garbage dump the size of a small town, could represent present day Zimbabwe. The English suburb of Borrowdale and the reservation of Resthaven seem to be stand-ins for colonial and pre-colonial Zimbabwe respectively.

While we’re on the subject, let’s talk about Resthaven. It’s a sovereign nation where its inhabitants keep the ways of pre-colonial Africa…including all of the unpleasant aspects. As a result, while Resthaven is an Edenic paradise for men it tends to be a rather unpleasant place for women. In many ways Resthaven could be seen as a caution against those who romanticize the past and advocate preserving cultures for the sake of preserving cultures. The fact that the people of Resthaven hardly ever leave it and only have the vaguest notions of the outside world suggest that it might have cultist undertones.

Like I’ve stated before this book has some seriously great diversity credit to it. Almost all of the characters are either black or brown, and you can count the white characters on one hand. Even the white characters somewhat count since you tend not to see White Africans in books too much besides maybe South Africa. One thing I found interesting about the race relations in the book was how most of the white characters typically occupied the ethnic labor jobs. Guess it goes back to the world of The Ear, The Eye and The Arm being something of a mirror image of the present day.

For the most part this is a science fiction novel. There are a few instances where the characters debate if spirits are involved, but it’s left fairly ambiguous. That is, until the end of the novel when things are pushed firmly into science fantasy territory. In terms of scientific accuracy I’d say that most of the advances in technology are fairly realistic for 200 years in the future. About the only bit that was off was the explanation for Ear, Eye and Arm’s powers. They grew up in a village near a nuclear power plant and were born mutated as a result. To be fair, it is mentioned that they were the exception rather than the rule for their village’s mutant population.

It’s mentioned that certain diseases, such as chickenpox, have been eliminated. I’d let that slide, but it’s shown that such diseases still exist in Resthaven. I know it’s to underscore the moral of not being blind to the ills of the past, but given that there is a very limited amount of travel out of Resthaven, it creates a major health risk. However, this is a minor issue and overall the science aspects stand strong.

For those of you who enjoy audiobooks there is a version narrated by George Guidall. George is a well-loved narrator of audiobooks, but initially wasn’t sure if he’d be able to pull it off. Turns out that my fears were misplaced. George has a considerable vocal range and has narrated other great audiobooks such as Eric Flint’s 1632 series, American Gods by Neil Gaiman and The Epic of Gilgamesh. Suffice it to say he does an outstanding job here as well. There is a slight hiss to the audio, but it’s isn’t that distracting, and you’ll hardly notice it.

The Ear, The Eye and The Arm has won the Newbery Honor and the Hal Clement Award. That second one is a part of the Golden Duck Awards. Also, don’t worry, I promise that no dogs are harmed in the advancement of this book’s plot.

Well there you have it. The Ear, The Eye and The Arm combines traditional African culture with science fiction technology for one unforgettable experience. If you’re looking for science fiction in a non-Western setting, or just good young adult science fiction generally, it can’t be beat.