What makes a superhero and who would you say was the first one to set the trend? By definition a superhero is “a fictional hero having extraordinary or superhuman powers; also exceptionally skillful of successful person” (Merriam-Webster.com). With this description, we could go way back in time to some of the classic characters found in mythology, or maybe not so far back to the beginnings of modern science fiction. Some believe the Hugo Danner character in Philip Wylie’s 1930 novel Gladiator is the original superhero that set the bar for all those who followed. But for the traditionalists, the archetypical of superhero is drawn (pun not intended) from the pages of comics.

Arguably, one of the earliest comic superheroes was the charismatic magician Mandrake, created by the talented Lee Falk (who also created The Phantom). Sure that all-powerful Superman guy first appeared in the Action Comics #1 from DC in June of 1938. And the first daily newspaper comic strip adaption of Superman wasn’t launched until the following year on January 16, 1939. Even Batman’s first appearance in Detective Comics #27 came later in May of 1939, and this was followed by his first daily newspaper comic strip adaption on October 25, 1943. But the alluring “performer” with all those tricks up his sleeve hit the pages much earlier, going into print as a daily comic strip way back in June of 1934. 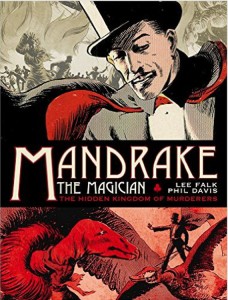 For those looking for their favorite magician after his final disappearing act on July 6, 2013, there’s still hope. If you want to relive those moments (or learn about them for the first time), you’re in luck. On March 2, 2016, Titan Comics released the spectacular first time collective appearance of the detective comic strips in the 160-page hardcover Mandrake the Magician Vol. 1.

Face it, Mandrake is a cool dude! The character does not wear tights, he does not fly, he is not an alien, and he rarely relies on brute force to defeat his enemies. Mandrake is a suave gentleman who depends on his intellect and his magical abilities. Are they actually magical powers or merely illusions? THAT is the question posed by those who doubt his superhero qualities. But read a few of these stories and you’ll be asking yourself how he made this guy disappear, or how did he project that guy’s thoughts, or…well, you’ll see. You’ll believe. 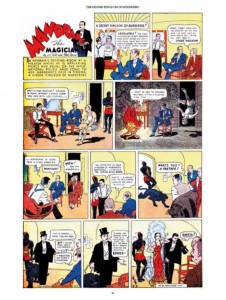 The artwork in this collection is a good reminder of the vibrant era of illustration, where the colors and detailed images by Falk’s friend Philip Davis stood out against the limitations of the times. Today, it seems like many of the character’s pop out of the pages thanks to the latest graphics technology and doesn’t really show some of the true, pure talent that is out there. And believe me, they’re out there! But in the early, simpler days of comics, the success of the strips relied heavily on the hand drawn images provided by the artists. Creator Falk realized this after only a couple weeks of doing all of the artwork himself, before handing the illustration reigns over to Davis.

Mandrake the Magician Vol. 1 brings back many memories of what real superheroes are supposed to be like. For a comic strip that lasted 80 plus years, Mandrake is a time tested superhero and we can only hope Vol 2 and many more after that will not be far behind.