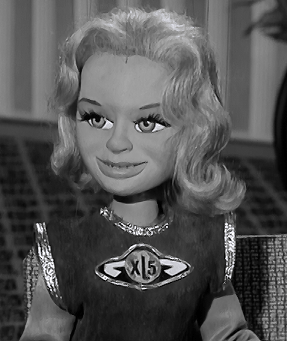 Anyone visiting this website for any length of time will be familiar with my affection for an early 60s television show titled Fireball XL5.

The show was created, produced, directed and often written by the legendary husband and wife team of Gerry and Sylvia Anderson, well known for Supercar, Captain Scarlett, Thunderbirds, UFO and Space 1999 (not to mention Torchy the Battery Boy).

It featured the exploits of the crew of the Fireball XL5, an advanced star ship that patrolled “sector 25”.  Captained by Steve Zodiac and crewed by Dr. Venus, Professor Matt Matic and Robert Robot (and sometimes accompanied by the alien Zoonie), the show featured Gerry Anderson’s “supermarionation” technology – marionettes with wire-operated solenoids that activated the character’s facial muscles, allowing them to talk and express emotions.

Dr. Venus was a typical 60s heroine, unfortunately making coffee and seeing to Captain Zodiac’s needs more than just about any other activity, but there were episodes and moments that featured her in key roles and that often hinted at greater respect for women in the future.  The fact that she wasn’t just a blonde bimbo in a bikini spacesuit was itself quite advanced for the era.  In several notable episodes, Dr. Venus can also be seen acting as the moral authority for the crew – and not infrequently telling Captain Zodiac how things were going to go down.

Farewell, Dr. Venus.  May your heart always be a fireball!

For more information on the passing of Sylvia Anderson, who voiced Dr. Venus on the show, please visit File770

A link to the programme for Hispacon and the announcement of a new issue of Iberoamericana Magazine.