Sometimes, it really was worse in the olden days. 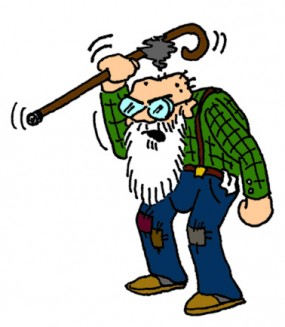 You’ve all heard cranky old people saying things like “you kids have it easy!  Why, in my day, I had to walk to school, barefoot, in the snow, uphill, both ways!”, usually in reference to how easy things are for the younger generations, or perhaps how much they take things for granted.  (Full disclosure: One of those cranky older people may have been me.  I do have a walking stick, I do have a lawn and I qualify for senior discounts at most restaurants and hotels.)

You’ve all also heard, I am sure, the claims that the younger generations act privileged and entitled, are impatient and have a deep disrespect for, if not distrust of, history, which greatly distorts their perspective on reality.  It’s as if the world simply did not exist before the advent of the internet, or, maybe it did exist, but nothing from that era is, like, relevant, man.

A lot of that intergenerational snark is more than understandable, if not justifiable, fear and jealousy.  Fear that we’re being replaced (it’s biologically inevitable) and jealousy over the fact that you’re all young and vibrant, full of energy and wonder and have decades of THE FUTURE in front of you, while I and my cohorts are old, gray, wrinkled, tired, creaky, grunty, cynical, jaded and frustrated over the fact that we know what you all are going to go through, but you just won’t listen!  Some of us may even be tired of saying “I told you so”.

We’re equally tired of hearing how bad you’ve got things, when, from our perspective, the least of you have access to things that we barely imagined might be possible.  It gets particularly bothersome when we know, beyond any doubt, that we had it worse than you and you all (thanks to your amnesiac relationship with history) apparently think quite the opposite.

I had a family friend over the other day.  He’s one generation removed from the baby boomers – a friend of my stepsons.  He happened to remark in passing that life is getting pretty scary, what with all the terrorist threats.  He’s reminded of this almost weekly because he has an alert system app set up on his smartphone and whenever it buzzes him, he’s prepared to grab his survival bag and head for the hills.

International terrorism has the next gens living in fear and dread:  suicide bombers, car bombs, IEDs, airplane bombers, ground to air missiles in the hands of jihadis, school shooters, anthrax, smallpox, ebola, our porous borders, computer hacking that could take down our infrastructure…. 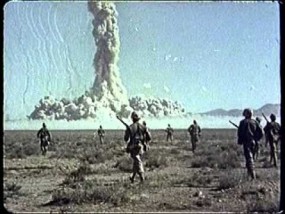 When I was growing up, my future consisted of the very real possibility of Total Nuclear Annihilation.  Or, if I was really (maybe) lucky, a short, mean and brutal existence scrabbling for unlabeled canned goods in the crazed-mutant inhabited ruins of civilization.  Nuclear weapons stores could blanket the entire Earth with blast, fire and fallout tens, if not hundreds of times over.  Some of those weapons – a VERY large percentage of them – were controlled by people I was taught to think of as mad men, or, at the very least, as people who did not think like we (the good guys) did.  World leaders with no respect for human life.  People with names like Stalin, and Malenkov, Khrushchev, and Mao Zedong.  (Not to mention our own brand of kook who’d much rather go down in flames than share the world with “commies”.)

Space needed to be conquered, not for the adventure and discovery, but so that we could orbit cameras to watch everyone and platforms from which we could bomb them out of existence.

One of the greatest feats of international diplomacy back then was called M.A.D.:  Mutually Assured Destruction.  An entire era of basing your treaties and trade deals on the assumption that if someone tried something nasty, their opponents could (and would) destroy the rest of the world in retaliation.

I know.  9/11 was a shock to the nation as bad as Pearl Harbor, if not worse, because we’d grown complacent since the war that made the world safe for democracy.  (And I don’t mean to diminish the loss of that event:  losing someone to terrorism of any kind is very personal to family, friends and co-workers, but I’m talking about our collective experiences here, not individual ones.)  But a few thousand deaths pale in comparison to tens of thousands, hundreds of thousands, millions of deaths that would have resulted from a nuclear exchange.

Which of course you’ll respond to by saying “but that hasn’t happened”.  To which I will respond – “oh yes it has”. 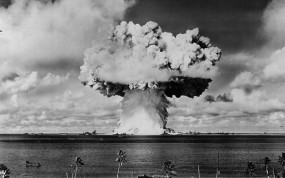 In 1945 we (the government of the United States of America, which, because of that whole representative democracy thing, means us) twice authorized the nuclear bombing of the nation of Japan.  The first bomb killed approximately 145,000 people.  The second bomb approximately 80,000.  Wounded/affected by lasting effects are approximately 300,000 at Hiroshima and 170,000 at Nagasaki.   695,000 people dead or injured from only two bombings.  Two very inefficient, Model T bombs.

No, those bombs weren’t dropped on American cities, but 4 years after we dropped those bombs on Japan, the Soviet Union tested their first nuclear weapon and Americans went from smug masters of the world to red fear crazed potential targets.  In 1957, the USSR tested their first intercontinental ballistic missile.  The US followed shortly thereafter. 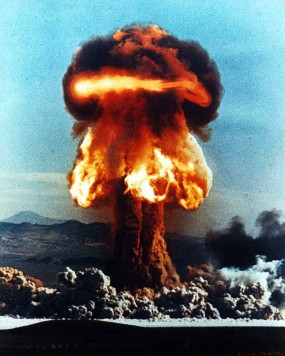 Here in the United States, the media went to town (fear sells);  we got films like Dr. Strangelove, On the Beach, Seven Days in May (our own people deliberately starting nuclear war in order to get the upper hand), Invasion USA, Fail-Safe; documentaries like Duck and Cover for schoolkids and booklets like Survival Under Nuclear Attack for adults (not to mention Civil Defense booklets like how to build a temporary shelter in your basement out of newspapers!); we got popular literature (on which many of the preceding films were based), television plays and, a bit later, Cold War Paranoia inspired films like Invasion of the Body Snatchers or A Boy and His Dog.

And, once every several weeks, a special alarm rang out at school and, instead of filing out to the playground in orderly groups as we did for fire alarms, everyone hastily scrambled under their desks because, if the blast didn’t get you, you sure didn’t want to get killed by your school’s roof falling in on you!  (At the very least, recovery teams would find the bodies neatly arranged in little rows.)

We were taught that nuclear war could, and most likely would, occur in our lifetimes.  Anyone who lived through the Cuban Missile Crisis can attest to that.

Do they have anti-terrorist bombing drills in schools these days?  I haven’t heard about any – no school-aged kids in this house, so my information resources may be limited.  But I did find reference to “answer kids questions – but don’t give them more information than they ask for” as a suggestion on a major K-12 educational website. 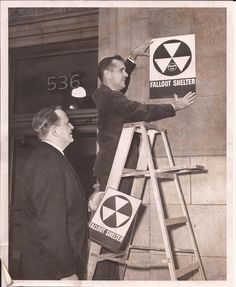 Is anyone encouraged to note the location of anti-terrorist shelters in the buildings they pass by every day?  Do they even have such things? I haven’t seen it.  Instead, schools have “lockdowns”, where everyone is encouraged to shelter in place (no mention of hiding under desks). 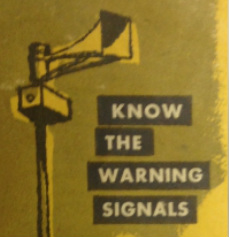 Do neighborhoods have mucking great sirens on telephone poles that scream out test warnings every week or so?  Haven’t heard ’em.  Is the government eagerly advertising the availability of booklets that will help prepare you to identify IEDs or suicide vests?  (No, but now, as back then, ordinary citizens are encouraged to rat on their neighbors when their ignorant, uneducated selves see something “suspicious”.)

Do they regularly sit kids through filmstrips and documentaries that show the utter devastation – like this one? 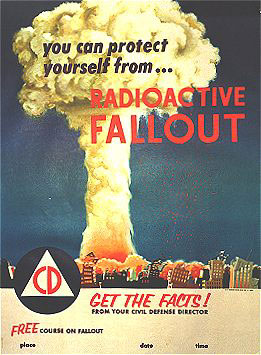 We are all maybe facing a few ounces of TATP with nails and ball bearings wrapped around it, maybe coated in strychnine (to prevent coagulation).  Or maybe a double-boiler filled with fertilizer.  Result – a handful of deaths, ten times as many injuries (some majorly life-changing) and the persistent fear of going to the airport, the bus station or the pizza parlor.

Versus facing a flash of light so intense it could melt eyeballs in their skulls, one that would permanently fix the shadow of immolated bodies on a convenient wall;  heat that surpassed that of the interior of the sun, a blast so strong that buildings imploded from over-pressure and deadly radioactive fallout that could linger for decades!  The annihilation of tens of thousands of human beings in a split second and the utter destruction of everything for tens of miles in any direction. With the persistent fear that invisible death could be falling from the sky at any moment of the night or day.  (For years planes flying over our house at night had me waking up and wondering if it was a Soviet ‘backfire’ bomber, heading for the Philadelphia shipyards.)

And there was nothing – nothing! – that we could do about it.  The payload section of an ICBM will not be visible before it detonates.  NORAD might be able to give us 15 minutes warning – might – unless NORAD gets taken out first.  Today, you can at least choose not to go to places where there might be a terrorist attack.  Back in my day, the entire country was a target. 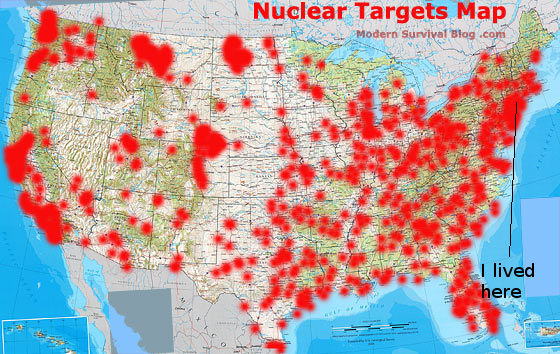 It’s kind of morbid and somewhat unfair to compare existential threats, but lets put things in perspective, shall we?  Terrorist attacks do not compare to the annihilation of the entire world.  Go ahead, throw terrorist dirty bombs or biological agents into the mix, there’s still no comparison.

There’s plenty of other stuff to be really worried about – like the threat to our fresh water supplies, the stripping of our oceans, the rise of a pandemic we are (still) unequipped to deal with, population pressure, global warming, the return of fascism, an uncharted world-killing asteroid….

If you want a small taste of what it was like growing up in the 50s and 60s, check out this collection of videos.

An interview with Greg Viggiano, Executive Director of the Museum of Science Fiction

Learn a little something about fandom, fanhistory and yourself with this fun survey of fannish knowledge.

Why Was Early Comic Book Art so Crude? (Part Two)