Do kids really still talk like that? Apparently so. 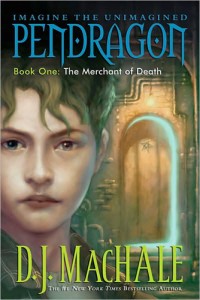 This is a retro review since DJ MacHale’s The Merchant of Death was published in 2002, but since I got this as a Christmas gift from fellow Amazing Stories contributor Sam McDonald, I figured this would be a perfect place to review the novel. For those who don’t know, The Merchant of Death is the first book in the young adult SF&F series, Pendragon. It follows the adventures of teenager Bobby Pendragon, who is a Traveler, which means he can travel to different points in time and space where he can help civilizations take the path that will lead them to a more peaceful future. I first came in contact with this series during last year’s Printers Row Lit Fest where I happened upon a copy of The Never War, the third book in the series, and its dieselpunk inspired cover. Still I am here to talk about book one, so lets get started.

The Merchant of Death is told from two perspectives: a first-person perspective through Bobby’s written journal entries, in which he recounts the events of his adventure to his loyal friends, Courtney Chetwynde and Mark Dimond, back home as well as a third-person narrative told from the perspective of Courtney and Mark (and sometimes Bobby). In short, Bobby is asked by his Uncle Press to come with him after he interrupts a make out session between Bobby and Courtney. He says there are people who need their help and he should trust him that it is important. After being attacked by a shape-shifter named Saint Dane in the subways of New York City, Bobby is sent through a “flume”, which is a sort of a worm hole used to travel to different destinations, or “Territories” as they are called, in this universe’s multiverse.

He arrives on Denduron, a medieval-esque planet with three suns. There he learns that a tribe known as the Milago are enslaved by a more advanced tribe known as the Bedoowan. The Milago are on the verge of extinction and Press needs Bobby’s help to save them. Problems soon arise when Uncle Press is captured, but Bobby is helped by Osa and her daughter Loor, who are also Travelers sent to help the Milago free themselves from Bedoowan tyranny. It is Osa who convinces Bobby to keep track of his adventures through a journal and send them back using a magical ring to his friends Mark and Courtney.

At first Bobby is not interested in helping the Milago and just wants to return home. He soon changes his mind when he learns that Uncle Press is set to be executed and the Milago have decided to win their freedom without the help of the Travelers, even if it means the death of many. Bobby decides to save his uncle and the Milago, all the while Saint Dane carries out his evil schemes in the background. Meanwhile, Courtney and Mark deal with Bobby’s disappearance back home, which includes the disappearance of his entire family and all record they ever existed.

I will start with how this book humbled me. When I first started reading it I found the lingo DJ used for his teenage characters to be rather lame. It almost sounded like what an adult thought a kid that age talked like. When I told my wife about this, who actually teaches at a high school, she laughed and said she has heard her kids use words like that. Granted this book came out 14 years ago, but perhaps certain slang lasts longer than others. Either way I was able to finish this book in a much better head space.

That being said, I did have issue with The Merchant of Death. Bobby was pulled through the events of the book with the adults always saying “there is no time to explain”. Its the mystery box style of writing that JJ Abrams is popular for. Some people may enjoy that kind of story-telling, but I am not one of them. I felt there were plenty of times someone could answer one of Bobby’s questions with a little more details besides “you will learn as you go”. Yes sometimes in life the best way of learning something is to just do it, but who has ever given a 15-year old keys to a car and said “no time to teach you how to drive, you will just have to learn by doing”. Now replace “drive” with “save a civilization from destruction” and you can see how insane Uncle Press’ plan was to begin with.

I also had issues with the villain, Saint Dane. He just came off as being evil for the sake of being evil. I find myself comparing The Merchant of Death to another YA book I recently read, Leviathan by Scott Westerfeld. In that book there are enemies certainly, but there is no main villain to get in the protagonists way to mock them about how futile their efforts are or offer them a chance to serve them. It actually makes for an interesting book, at least in my opinion, but it hurts this novel’s story.

Despite the above criticisms, The Merchant of Death isn’t a bad book. It is well-written, the characters are likable and it certainly seems like DJ has some interesting world-building in store, especially from what I briefly gleamed by scanning the other books. Still I am not sure if I will pick up the next book in the Pendragon series. There were just too many questions and not enough answers. Maybe they will all be answered to my satisfaction later on, but I may just get even more questions before DJ tries to wrap up everything in disappointing conclusion.

If you like mystery box writing, then you should check out The Merchant of Death. If you want something that doesn’t treat kids like they are incapable of understand high concept ideas, like political conspiracies and gender inequality, try Leviathan.

The 7 Levels of Recommending

A report on the XXVI Alberto Magno awards

The Clubhouse: Death of an Archive; Book Reviews

Scide Splitters: The Night Life of the Gods by Thorne Smith