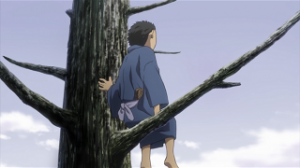 Mushishi #18-19 – Mushishi is set in an alternate-history Meiji period (late 19th/early 20th century) without the huge drive for modernization of society that happened in our timeline. So it’s no surprise that the upper classes still practice arranged marriage, even to the extent where the bride has no say in choosing the groom.

Keeping part of the umbilical cord of one’s children is a custom still practiced today in Japan. It symbolizes the mother-child relationship. When Reki walks away to his new home carrying his cord, it means that he no longer has a connection with Shino. The symbolism is there too in the mushi ultimately emerging from Reki’s bellybutton and how he talks about his relationship with lightning; when he says the lightning comes straight for him, there’s a connotation of it being right and correct.

In both of these stories, the mushi-exorcizing takes a backseat to Ginko’s ability to diagnose the social situations it’s taking place in. He picks up on Shino’s estrangement straight away, and it doesn’t take him long to figure out that Shigeru must have been involved in Shinobu’s death, though he’s canny enough not to let on that he knows.

Both of these were good, solid character-driven episodes, and both, though dark, end with a feeling that justice of a sort has been done. 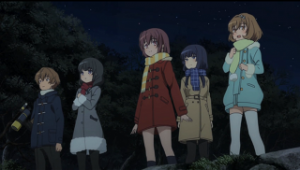 Celestial Method #10-11 – Everyone had the same wish, and so it has been granted at last, but it means that Noel has to vanish because her work is done. Now the five friends have re-bonded and can face the future together. The End.

…except there’s another episode. Just a really long denoument, or is there another revalation waiting? Do we get to find out where Noel went next, if she did? If she’s really hopping from place to place granting wishes, shouldn’t the saucer have been getting attention for hovering somewhere else before coming to Kiriyako? Or is it perhaps the strength of five people wishing for the same thing that was required to summon the saucer, and it just pops off to nowhere in between sufficiently strong wishes?

And what the heck is with the lake? Maybe it’s just an artistic choice, but it still looks exactly like an impact crater. 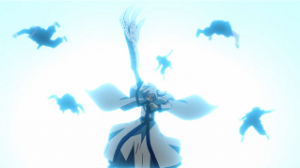 Yona of the Dawn #10-11 – Yona gets one free dragon handed to her unquestioningly by an adoring village, and the rest she’ll have to work for. The Blue Dragon is in hiding, and the other two can hardly be as eager and pliable as the White Dragon. Well, I guess they can, but if so, I’ll lose a lot of respect for the author.

Wandering all over looking for the next dragon allows Hak and Ki-ja to size each other up, engage in some traditional rivalry about who’s more badass, and earn a modicum of each other’s respect. And to find out that what really impresses Yona is Yoon’s smarts. That was a nice touch.

Ki-ja’s introduction to camping throws a new light on Yona’s experiences a few episodes ago. While she was even more pampered than Ki-ja, she adapted faster and put up with much more. But in the end they have much the same reaction– realizing their weaknesses and being determined to do better. 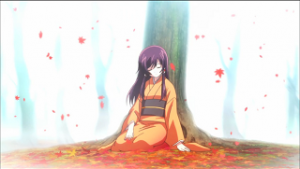 Gugure! Kokkuri-san #10-11 – Probably just about every culture has some version of the spirit which lingers in this world because of unfinished business. The punchline to this one could have been deeply poignant in a completely serious story, or funnier if the episode had stuck to all-out comedy, but allowing itself to mellow just leaves the conclusion feeling muddled.

As for the pedophile tengu, I feel that juuuuuuust managed to stay on the funny side of taste. Hoo boy, this author is certainly not afraid of pushing the boundaries.

Episode 11 holds up much better, with the crowning moment of silly provided by Currythulhu. Shrinking everyone down to infancy one by one demonstrates that however badly the residents of the Ichimatsu compound get along, hey, it could always be worse. Much worse. But in a funny way.