Home Anime/Comics Anime roundup 3/17/2016: Players at the Game of People 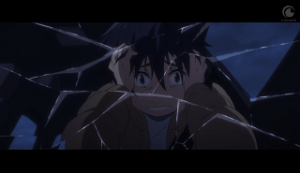 ERASED #10 – If you look at this from the killer’s point of view, this is still a pretty creepy story. He’s all settled in and ready to start picking off victims, and suddenly his opportunities start vanishing. Suddenly one of the students is acting a little odd, and just coincidentally showing up between him and the good targets. And when asked directly, the kid seems to know that a serial killer is on the prowl, even though no murders have happened yet.

And then, just when he’s almost out of the way, the kid’s last words are “I know your future.”

This is going to rattle even a highly competent criminal. In that light, it looks completely natural for Yashiro to gloat at length about his clever plan. He’s trying to convince himself that he really is that good at what he does, and he doesn’t have to worry about Satoru anymore, because he totally, absolutely has this situation handled. It’s also notable that this is the first time Yashiro hasn’t taken the time to set things up so that someone else can be blamed for the murder (or so it appears)– he just needs to kill Satoru as quickly as possible.

And has he succeeded? Well, normally, you assume that the protagonist has to survive, but it was established early on that “Revival” doesn’t care about Satoru’s own health, and let us not forget that the original Japanese title of this series is Boku Dake ga Inai Machi— “The Town Without Me”. Yes, the same as Kayo’s essay about vanishing. (Except Kayo used the first-person pronoun watashi, which is typical for girls, and boku is typically used by boys.)

All that can be said for sure is that there will be another episode, and somebody is going to have to stop Yashiro. 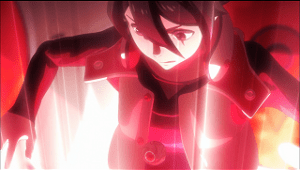 BBK/BRNK #10 – Reoko needs an intervention. Arabashiri and Hazama are seriously concerned about the amount of damage she’s been taking, and Matobai is even willing to work against her to allow our heroes to make it to Treasure Island. And it seems like something is up with Entei itself.

BBK/BRNK is doing some serious shouting out to a classic mecha series, Neon Genesis Evangelion. For now, I don’t think I need to spoil it for people who haven’t seen it already; let’s just say it’s highly significant that Entei is still “awake” when it should be shut down, and that Ōbu tries to absorb Azuma. I suppose it’s not a coincidence of character design after all that Team America’s mentor resembles a major character from that series.

Migiwa is acting oddly too. She never even mentions her missing husband and daughter, not even to Azuma once he’s awake again. She shuts down Hīragi’s attempts to talk about his father. She has no clue who any of the other bubuki users are when they show up to crash the party. It’s like she’s been deliberately suppressing any thoughts about the outside world.

Or maybe some other force is suppressing them. She talks about Treasure Island as though it has consciousness. What it definitely also has is a suspicious degree of bilateral symmetry, an ability to maintain a habitable environment in conditions that shouldn’t be habitable, and structures on its underside which may as well be VTOL nozzles. Remember a couple episodes ago, when Matobai described the behavior of uncontrolled buranki as “terraforming”? This is an artifical structure, and I don’t think it’s from around here. 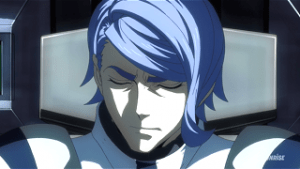 Mobile Suit Gundam: Iron-Blooded Orphans #23 – This is a story of two people realizing their respective sides have gone insane and despairing of being able to do anything about it.

Merribit is the latest person to point out that the whole idea of child soldiers is pretty screwed up to begin with. She’s also coming to realize that the life experiences of the Tekkadan kids don’t even allow them to recognize that fact. The only people around who are listening are Makanai and Kudelia, and Makanai seems to have written them all off. Kudelia is at least thinking over her part in contributing to those experiences– hopefully she’s trying to come up with a way to help normalize their lives later on.

Gaelio has just now worked out how thoroughly he and everyone else have been played by Fareed. The result is that Ein is basically a donor brain permanently housed in a robot and Carta is probably on her way to the same fate. Fareed tipped her to Tekkadan’s location specifically so she could be an incompetent screwup once more, have her spirit broken, and be sufficiently injured that she too can only be saved with cybernetic surgery. Of course she’ll agree to it; it’s clear she’ll do anything for Fareed. And since Ein is totally on board with the plan, Gaelio has no one to turn to.

If there’s one small note of hope, it’s in the preview for next week– sounds like Mikazuki is going to decide to actually think about who he fights next, rather than just blindly following orders. 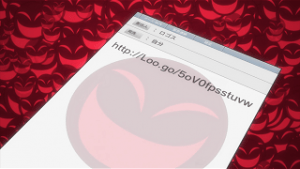 Active Raid #10 – It’s time for a bit of an explanation about Mythos’s family life. The little girl is a hologram replica of someone, probably his sister. (Have you noticed that Liko looks like an older version of her?) Other sisters are hired on a monthly basis. No matter how thoroughly Mythos pays them off and swears them to secrecy, you’ve got to think that eventually one of them is going to say to her friends, “You know, I had the weirdest job once…”

While Bird serves as a decoy by turning himself in to police, Mythos’s next brilliant plan is to get into an important national database by fooling it into a failsafe mode with a fake earthquake alert. This happens during the commemoration of the disaster that reduced parts of Tokyo to quicksand, another sign that whatever it was is highly significant to understanding what Mythos is really up to.

And meanwhile, Unit 8 is suddenly being disbanded. This could be more mischief on Logos’s part, but it’s telling that we haven’t been shown who was really responsible. It could also be the work of Unit 8’s political enemies, or maneuvering on the part of the Self-Defense Force which wants to push its own Willwear program. 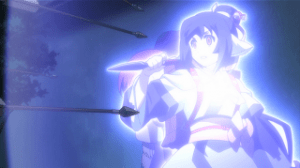 Utawarerumono: The False Faces #23 – As our heroes scramble for safety, the party is split up again. The swordsmen get to show off, Yakutowaruto causes a really ridiculous amount of collateral damage, and suddenly magic is popping up everywhere.

Yet another thing the first season could have done instead of being bogged down in repetitive jokes about adult manga was lay some of the groundwork for this. Was there ever so much as a hint before that Nekone could lay hands on people to heal them? Or that she had any skills, really, other than being great at taking tests?

It’s more excusable to not have mentioned anything about Kuon’s power. It seems to be something that arises unconsciously; it’s not clear if she’s even aware of what happened. But it is undoubtedly related to the power her father held in the previous series.

The leader of the plot against Haku and Anju is more or less revealed to be Raikō, not that the show seems really interested in the fact. It’s just another way to fill time so the big cliffhanger can be the setup for Oshutoru and Vurai finally having a chance to go at it one on one. The way this is going, I’d give even odds that Haku talks them out of it somehow.