Football is over and we can finally get back to our regularly scheduled programs on Sunday nights. YES, once again we can enjoy those tense moments of dead walking the Earth and the living struggling to remain among the living.

This coming Sunday night, February 14, 2016, is the mid-season return of AMC Studios’ The Walking Dead. After 75 episodes spanning 5 1/2 seasons – and never having read the comics – this fan has decided to go back to the comic book origins and see what all of the hullabaloo was about and if it stands up to the televised version, or vise verse.

Leap ahead seven years to October 31, 2010 (again on Halloween – awesome), the first episode of the television series The Walking Dead aired on AMC. And then things got crazy. Fans who had never read the comic version (myself included) were taken aback by the visual beauty of rotting flesh and other graphic horrors that followed.

Though nominated for many awards over the years, the visual effects and makeup work is what drew me to the series. The macabre imagery is second to none on television today.

So during this long winter break between episodes, I decided to do a little binge reading of the comics and try to get caught up. I do have all of the available seasons of the television series on DVD and consider myself fairly knowledgeable with the production, but the only printed comic I had until now was the #1 issue (NOT a first print). 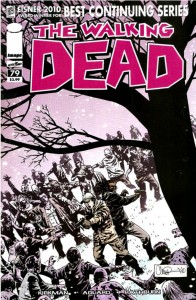 It has been well established that the television series does not follow or coincide with the events of the comics, but many of the characters and events can be found in both. What I found surprising if not ironic was my timing for this little endeavor. The premier episode of The Walking Dead first aired on television in 2010 shortly after issue #78 of the comics was released and a few weeks before issue #79 hit the shelves. The next issue #80 was the first of a five-part story arc titled “No Way Out” (which went on to become the graphic novel “volume 14 under the same name and included issue #79). The crazy twist? This happens to be the same place along the comic timeline as when unsuspecting fans were first introduced to the television series. The title of this Sunday’s episode? “No Way Out.” Crazy.

Granted, we are not talking about Shakespearean work here. What we do have is a brilliant premise and the two most ideal platforms for getting that idea out to fandom. The television show does have many flaws (see here), but from a fans perspective, it is entertaining and fun.

The story is filled with horror and gore. The core of the entertainment value centers around the characters and what they bring to the apocalyptic table. The most prominent aspect of these characters is that they are real. By this, they have flaws and are vulnerable. The flaws stem from the moral conflict between those who strive to survive and those who believe that the horror will someday end and society must maintain some sense of humanity. The vulnerability lies in the knowledge that even the most prolific characters can be eliminated at any turn. And they have.

Most if not all of these facets are true to both the comic and the television series. But where they stray is in the writing. The television series has brilliant writing that gives believability to the otherwise unbelievable plot. But form the comic standpoint, the writing of Kirkman was horrendous early on. Perhaps this is in part a complement to the actors and their ability to make the dialog work on screen. But in print, this same compassion and resolve did not always translate.

An example of this would be when Maggie first introduces herself to Glenn half way through issue #10. The dialog between the two characters reads more like a script from a bad porn movie than that of an emotional epiphany of two people realizing their post-apocalyptic options for relationships are limited. It only took one page containing 9 panels to make this story almost unreadable. This was a moment that could have (and may still have) ended the experience for many hopeful fans. Sex has a place in literature. And in most instances in this series, it is handled well. But sadly, not here.

Kirkman’s limited writing abilities in the earlier editions may also explain why the literary novelizations based on some of the characters are either written or co-written by somebody else. This is by no means a denunciation of Kirkman’s talents in creating fantastic worlds with powerful characters, it just means he needed to hone that writing skill a little more.

In fact, his progression as a writer has improved immensely since those first installments. In issue #54, the character Dale sums up humanities primary problems of trying to survive in this horrific new world, “Find a place strong enough and you have to worry about other people wanting it. Get a place that’s not desired by other people.. and it’s not strong enough.” In hindsight, this could have been the series’ tagline as it pretty much describes the group’s number one struggle. Sure there are dead people walking around trying to eat you, but the bigger problem is dealing with the living and Kirkman answers this in one bubble.

The other notable element of the comics is the color, or lack thereof. Other than the cover artwork, the stories are presented in black and white. At first this is a bit off putting when compared to the brilliant colors and artwork used in today’s graphic novels. But it doesn’t take long to appreciate the simplicity of the images and the realization that the gore can be just as gruesome in black and white if not more so. This can also be evident in the television series in a few episodes and flashbacks where black and white is utilized. The fact that it is a touching reminder of “the original” classic zombie movie Night of the Living Dead doesn’t hurt either.

The major downfall of using black and white in this particular series is its impact on such a vast cast of characters. It becomes necessary on more than one occasion to go back a few pages or issues to confirm which character is which. Without color, some of the characters are too similar and can be confusing. Unless they die off. That always seems to solve the problem.

Which is better, the show or the comic? Jaded by the familiar, I would have to say the television version. Considering AMC utilizes a slew of writers and some pretty talented actors who have turned a few secondary characters into cult figures (which is important when everybody who isn’t Rick or Carl could die any week), the odds are a little tilted. It would be interesting to see if some of the television characters who are not part of the comics eventually end up in the comic pages.

Robert Kirkman has created a fantastic world of chaos and danger, and readers are cautious to grow too attached to any one character. That’s what makes this series so compelling. The Walking Dead comics are the original medium and seem to be improving with age. Though they both follow variant plotlines and many of the characters are polar opposites of their counterparts, they are both tied to Kirkman’s idea, do whatever you have to do to survive.

Looking ahead, The Waking Dead television series has the potential of turning into a Mad Max’esque type world if it follows the trend of the comics. But since nothing is certain in these to similar yet differing stories, that will have to wait for another discussion.