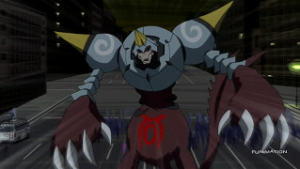 Concrete Revolutio #5 – So: a group of aliens including the one masquerading as Daishi Akita, head of the Superhuman Bureau, decided for reasons as yet unknown that the Japanese public needed to see kaijū as friendly creatures. The people at Kaijū Radio were determined to be useful idiots, so Professor Hitoyoshi whipped up some kaijū-generating serum for Emi to supply to them. As a side bonus, Hitoyoshi got to run an experiment on Jirō that Jirō would never have agreed to.

But then a kaijū winds up helping student protests (Japan, like most every other developed country, had a strong anti-war, anti-authority student protest movement in the 1960s), and the US is stockpiling Martian kaijū, and a decision is made to engineer a noble death for MeGāGon.

While ulterior motives are still being sorted out, the fact that half the bureau is lying to the other half and the fact that his adoptive father has a very loose sense of scientific ethics seem like good enough reasons to explain why Jirō went rogue. On top of that, Yoshimura isn’t telling anyone the whole truth about himself.

At some point Kikko must have discovered the secret, but from what we’ve seen so far, that must have been later than any of the incidents in the 1970s.

I still think we’re going to see (Me)GāGon’s older brother again. Be on the lookout for suspicious young men with freckles in the flashforwards… 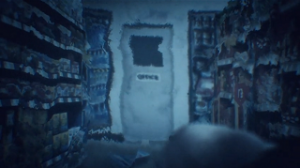 Kagewani #5 – With a title like “Strange Color”, one’s hopes can rise for a Lovecraft shout-out, but no. Just an invisible monster in a convenience store. A highly effective one, though.

Sarugaku is on the scene immediately again. What do they know? Are they just better at tracking the monsters, or better at predicting appearances, or are they responsible in some way? If it’s not the last, then why is Kimura being presented as such a suspicious character? 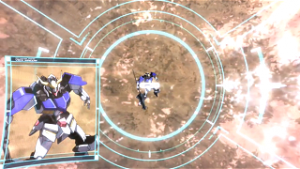 Mobile Suit Gundam: Iron-Blooded Orphans #5 – The gang has finally made it to orbit, which means, of course, it’s space battle time! Several enemy mechs are sacrificed while everyone ooohs and ahhhs at Mikazuki’s fighting skills. A short paean is also made to the Gundam suit, whose appearance means momentous historical things are happening. Now, buy that model, kids!

Ein has been supplied with some motivation by Crank’s death and then the reuse of his Graze by Tekkadan. (In one of those hard-to-translate bits that gives subtitlers headaches, Ein repeatedly refers to him as “Crank-nī“, meaning that Crank was like an elder brother to him.)

To further demonstrate the general crappiness of the universe they are forced to live in, Tekkadan gets sold out twice in one episode. Although, c’mon, Todo was being so obviously disgruntled that Orga had to have suspected him by then.

Fareed looks to be shaping up as the main antagonist. If that’s the case, I hope they come up with a better epithet for him than “Chocolate Man”. It’s hard to be scared of Chocolate Man. 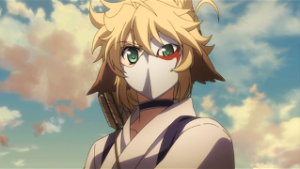 Utawarerumono: The False Faces #5 – Utawarerumono is a hybrid game with visual-novel aspects and strategic combat. For the combat part of the game, there have to be units to bring into combat, and that means everyone has to be individually brought in and introduced. Which in turn leads to slow episodes like this.

Ukon/Oshutaru’s title is “General of the Right”, which is reminiscent of a title used in medieval Japan for a sort of deputy minister of state. He’s very concerned with keeping the capital running smoothly, at least. So he hires Haku as a stand-in to do good deeds and keep people happy about the current regime.

Having Haku operate in his place is ironic when you take a good hard look at the General of the Right and realize that without the Ukon wig and beard, or the Oshutaru mask, he might look very, very similar to Haku. Almost his twin, even.