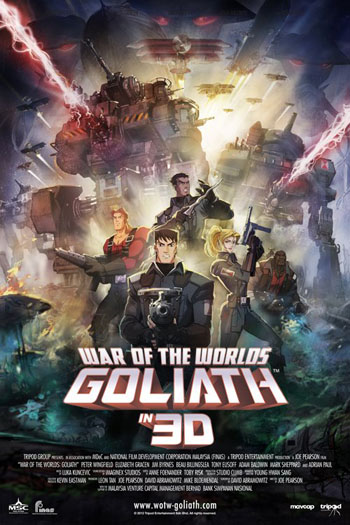 The animated film War of the Worlds: Goliath has been on my radar for quite some time. I first heard about it in May 2012 when a friend of mine wrote a preview of the film on my blog. Later, I even got a chance to chat with the director of the film, Joe Pearson, in September 2012. Surprisingly it still has taken me over a year to watch the damn thing, but luckily I scored a review copy and sat down this weekend to check out this loose sequel to HG Wells’ War of the Worlds.

The film is set fifteen years after the initial Martian invasion in 1899. Like in the novel, the Martians were wiped out by Terran germs, but still devastated many world cities. Now in 1914, as Europe seems ready for war, signals are detected from Mars suggesting another invasion is imminent. Humanity is ready this time, having reverse engineered Martian technology and forming A.R.E.S., a multi-national defense force headquartered in New York City. The story is told from the perspective of the crew of Goliath, a new battle tripod built to fight the Martian war machines. While testing it out during a war game, our character discover that the Martians have already begun their invasion and A.R.E.S. is the only hope to save humanity.

I am being honest when I say this film was fun to watch. I watched it after a rough week at work that included me having to go in on Saturday. Exhausted and miserable, not exactly in the best mindset to review a film, I found myself forgetting my worries as I absorbed the story. The art is certainly inspired by the dieselpunk genre and includes a combination of traditional and computer animation. There are plenty of action scenes featuring giant airships and heavily-armed mecha. I found the diverse cast of characters to have plenty of depth.

Meanwhile, there was plenty of historical cameos, including ones by Nikola Tesla and Manfred von Richthofen. My favorite had to be Theodore Roosevelt who at one point rode on the top of a battle tripod while carrying a portable heat ray. How could the Martians ever defeat that combination?!?! More importantly, this symbolizes that you can have films with historical characters intentionally doing things they never did in our history and still have an entertaining product. That is a good sign for future alternate history films. 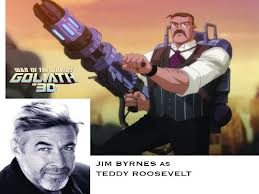 That all being said, this film is far from perfect. I found there were a lot cliche moments in the story (why are the Germans always trying to prove how we are not so different?) and I don’t understand why humanity had to directly copy the Martian tripod design for their mechs. Wouldn’t four legs be sturdier or two legs be faster? Three legs is just so unwieldy. Some engineer must have pointed this out when they began building the first mechs.

Furthermore, ignoring the fact that we are dealing with space aliens for the moment, I found the membership of A.R.E.S. to be a tad implausible for 1914. A.R.E.S. is a multi-cultural group featuring people of different races and sexes working together. Even with the threat of a Martian invasion, I find it a little unbelievable that humanity would advance so quickly on human rights while we are still trying to figure out in this timeline. In all fairness, Captain America: The First Avenger committed this sin as well, so I am not trying to be that hard on Goliath.

Those criticisms aside, I still recommend War of the Worlds: Goliath as a entertaining animated film for adults. I also hope it helps open the door for more alternate history films, especially those that don’t use alien space bats to tell the story.