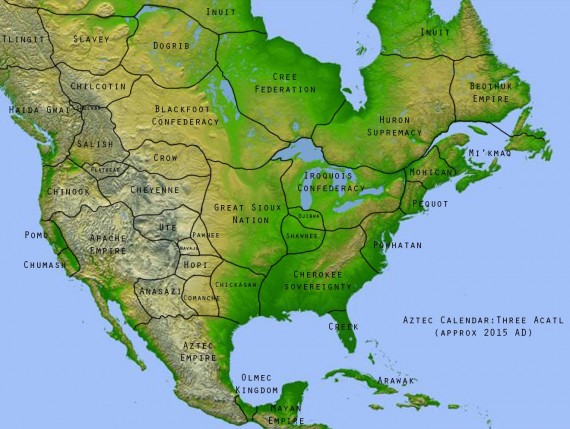 Last week, the map you see above went viral over the Internet. People were sharing it as a somewhat accurate depiction of what North America was like before it was colonized by Europeans. They lamented the fact that they had never seen such a map in all their years of education and criticized the American government for not doing more to educate people about Native Americans.

The problem with the map was that it actually depicted a North America if Europeans had never colonized it. You can even see at the bottom right that the map is set at “approx 2015 AD”. In reality, this map was created by SF and comic book writer Joseph Abbott (a.k.a. Liminal Soup). He originally posted the map on Imgur (it has been removed since), but it was shared without his permission on /r/MapPorn. It seems the vast majority of redditors there knew this was a fictional map and even I myself covered it on my alternate history blog’s long running series, Map Monday. At some point, however, someone didn’t get the joke and shared this map as a real depiction of pre-Colombus America. That, as they say, is when things got weird.

I’m not entirely sure who patient zero was, but a lot of evidence points to a “Aisha Noelle” who posted the following on Facebook: 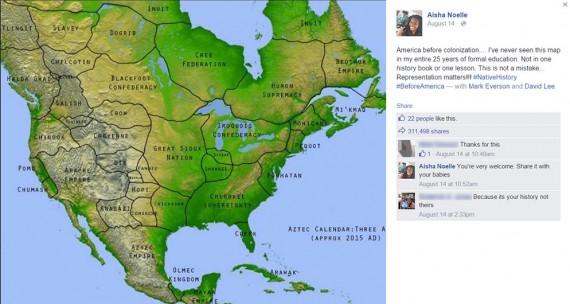 As you can see the map was shared over 300,000 times, mostly with the same criticisms of the American education system attached with it. The map also appeared on Twitter as well, but I don’t have any good screenshots of that. I can say, however, that I saw many historians and SF authors (or, to put it another way, people who should have known better) share this map as historical fact. Eventually others began to point out the fictional nature of this map, including myself, but I was surprised that there was actually push back from many who defended the map as real (I even lost a Facebook friend over it). Soon, however, reason and common sense won out and retractions appeared everywhere. Snopes now has an article dedicated to disproving the map.

This isn’t the first time someone has mistaken alternate history for real history, although I can’t remember an incident of this scale happening before. Many alternate historians I have talked to have stories of receiving emails or comments from people telling them there alternate history is not what actually happened. My friend Ben Carnehl even shared a story about the time when the tourism company, Honu Eclipse, plagiarized his alternate history on Easter Island, which featured a biography on the current king of Easter Island…which doesn’t have a king in this timeline. Even though the company took down the plagiarized content pretty fast, you would think a company who does business on Easter Island would have some knowledge of its history and even if they aren’t experts, wouldn’t they have had to deal at one point with representatives of the king’s government to know that they actually had a king? Then there is this map which got a lot of criticism in alternate history circles after it was found on several politically oriented sites. I won’t share a picture here due to not wanting a political debate to erupt, but click on it and let me know if you noticed anything amiss. (Spoilers: I didn’t realize America actually lost the Revolutionary War.)

How do we explain these incidents? The most popular theory I have found is that people are just “stupid” or “ignorant” when it comes to history. Most people are so historical illiterate that when it comes differentiating historical fact from historical fiction, they lack the foundation of knowledge to realize the difference. I personally, however, feel that argument over simplifies the issue. Remember those historians and SF authors I mentioned before? They should have known what counterfactual and alternate history is, so why didn’t they see the map for what it really was? Additionally, in the age of Google, people have access to vast amounts of data that could easily allow them to double check whether something is real or now. Furthermore, we live in a world that is increasingly skeptical about everything they hear, even with things that mainstream society has long accepted as true. Despite vast amounts of evidence to the contrary, many believe that we never landed on the Moon, 9/11 was an inside job, vaccines cause autism and GMOs will kill you. So with all that I said above, why did so many people share this map as fact?

Well I personally think the actual historical value of the map was meaningless in the face of the message it was attached with. Aisha and the others were sharing a belief they already held: that the flawed American educational system was ignoring Native Americans. To be honest, they are completely right, and this map does validate that belief, although in a way they never intended. Did they have good intentions? Of course. Were they still wrong? Yes, but in some ways it wasn’t their fault. Historical ignorance plays a part, but so many derive their entertainment from “mundane” sources that they don’t always recognize fantasy when it is right in front of them. They will recognize the obvious stuff, like elves, superheroes, werewolves, etc.; but more subtle variations of it, like fictional maps of timelines that never existed, are harder to tell from the real thing, especially when they lack the basis to tell one from the other.

Perhaps all of the above is just another way of saying “stupid”, but I find that to be very mean-spirited and the people who shared the map at least had their hearts in the right place. In fact, better maps about Native American history went viral with this map, so some good did come out of this. If anything the incident with this map highlights not only why we must stress the importance of a proper historical education, but also how far speculative fiction has to go before it is embraced completely by the mainstream. I recommend patience and politeness in the future because, let’s be honest, history tends to repeat itself.

An Olive Branch for the Puppies

No Campaigns, No Slates

Review: The Book of ORIGINS by Lawrence Millman

Judging Books by Their Covers: Agent of Vega