Kroma is an independent online graphic novel written by James Dee with art by John Chester, Sebastien Sanches and James Dee. It tells the story of the kingdom of Kroma, whose people have been divided based on colours

Colors evoke feeling. This is an objective fact as well as a subjective one. There are countless psychological studies that suggest that certain colors trigger specific emotions. The advertising industry relies upon those studies to sell people stuff.

Any artists knows this as well, or should. Artists who wish to evoke a certain mood will choose their colours very carefully. It’s mostly subjective, but it is fairly well accepted that red is a “hot” colour used to denote anger or passion. Blue is a “cool” color that is used to evoke moods that are more introspective or melancholy, and so on.

Everyone has their favorite color, but what if your color choice denoted more than moods or feeling, but classified your place in society? This is one of the big questions asked in Kroma. 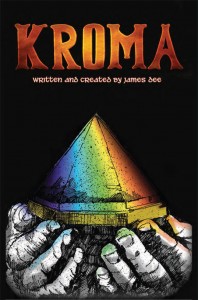 Kroma is an independent online graphic novel written by James Dee with art by John Chester, Sebastien Sanches and James Dee. It tells the story of the kingdom of Kroma, whose people have been divided based on colours. A past ruler created three churches intended to celebrate the colours of nature.

The first church, Amba, worships the sun, the crops, the fruit on the trees and all things gold, yellow or orange. The second church, called Arga veberates meat and the hunt and the “life blood” that fires through citizen’s veins.The third church is the Azoo which worships the sea and rivers and the fish of the sea.

The divisions of the churches gave rise to conflict so a secular administration, the pallid, who have managed to keep peace between the devotees of the three churches. The pallid preside over a council which represents an alliance of the Amba, the yellow faction, and the Arga, the red faction. As the story opens there is conflict over the Pallid’s decision to allow the Azoo, the blue faction, to join the council.

Predictably, religious prejudices flare up and the Pallid are overthrown and all-out war begins with the Amba and the Arga intent on wiping out the Azoo. It is not long before the spectre of treachery and betrayel among all the factions is raised. 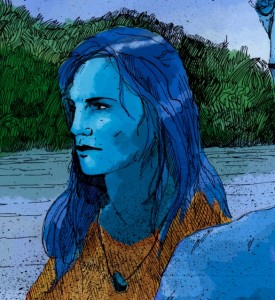 Against this conflict we are introduced to Fyn and Lusa, two star-crossed lovers. Lusa is Amba, the daughter of the dead king, fromer ruler of Kroma. Fyn is an Azoo, son of an Azoo councilman. Naturally their illicit love affair is complicated further by the chaos erupting all around them.

The first issue presents a solid beginning to what promises to be an engaging series. The concept is thought provoking and the execution fairly well done. The artwork, while just this side of professional standards, has a few issues, but is mostly consistent and serves the story well. Because of the nature of the story the pages are all wonderfully colorful. The idea of societal dividing lines drawn by color is nothing new, but Dee manages to navigate the story (so far) without being mired by cliches.

The only criticism that I have about Kroma is the rather long (two pages of plain text) introductory passage. The passage explains how a “…civilization not dissimilar from ours, has been successful in expanding it’s range across the galaxy, setting up colonies on a number of habitable planets. But one such seeding and settling operation was cut short before completion. Political upheaval on their home world led to the mission being scrapped, and the first wave of settlers stranded, with communications severed.” This planet,named Terra 3, has lost all awareness of its extra- terrestrial origins. 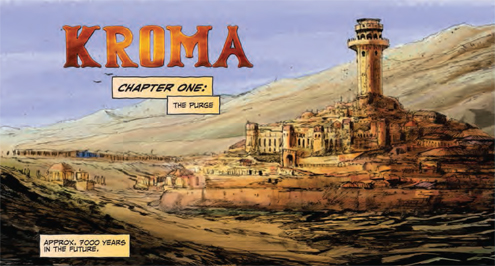 The preamble goes on to tell how the spacefarers have returned to Terra 3 to observe but not to interfere. Now, while the concept of the “lost Earth colony develops its own society” is one of my favourite science fiction tropes, and, indeed, is what first drew me to this project, it is introduced in a rather long text preamble that might her better to have been excised. Honestly the story is engaging enough without the concept of the lost Earth colony. Dee could have trusted his own and his artist’s storytelling abilities to engage the reader. The concepts outlined in the preamble do not come into play in the first issue. Perhaps they will later and it would be probably better to introduce those concepts gradually throughout the issues, letting the story develop organically rather than having a long info dump right off the bat.

Aside from that quibble, Kroma is an engaging piece of online graphic storytelling, putting me in mind of some of the best of the old school comic series that one would see in Heavy Metal magazine back in the day. Highly recommended.

You can find out more about this project, and purchase the first issue at www.kromaworld.com

Canada Day, Steve’s 150th post for Amazing and – attack of the killers from space!

Review: Journey to Where by Steven Paul Leiva