Home Film/Televison TV Review: Once Upon a Time 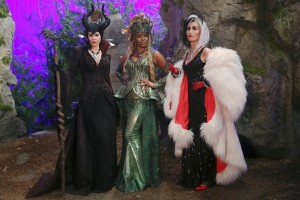 I’ve been a tad quiet recently, but the fact is I simply haven’t had time to watch any TV. I’ve finally sat down this week to watch some TV and just in time for the return of Once Upon a Time. This season has been brilliant with its Frozen theme, probably as good as the first season, but I wasn’t quite sure how that was going to continue.

The mid season break ended with Gold’s true colours being shown and being kicked out of Storybrooke, only for us to briefly see a flashback to when he met Ursula, Cruella de Vil and Maleficent. Bringing in three evil characters was clearly making it clear that the evil in Storybrooke is going to be badder than ever. And they were right. Gold appears to still be trying to do right by Belle, he just doesn’t know how not to be bad. He is desperate to get back to Storybrooke and the only way he sees to get there is to bring in some more evil characters, in the form of Ursula and Cruella. Victoria Smurfit is a brilliant casting as the fur loving villain. The Irish actress has had a few movie roles including About a Boy and The Beach but nothing that has really made her stand out from the crowd. But I really think this is the role she was made for. She has the perfect blend of evilness and humour, along with a great English accent.

I’m really looking forward to the rest of the series. What is Gold up to, and is Regina going to join her old evil pals or stay on the good side?