UK and Ireland, your long national nightmares are over! After another leak to UK Anime Network, Viewster has given up waiting for whatever was holding things up and announced some winter simulcasts. Rest of Europe, there’s news in there for you, too. 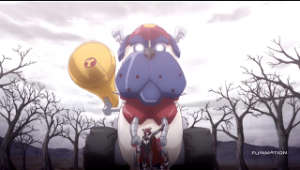 Yatterman Night #4 – The Dorombos try to emulate their ancestors in yet another way by running a scam, only to run up against the unfortunate fact that the Yatter Kingdom is basically North Korea and nobody has much in the way of spare funds to be scammed out of. But soon they have a bigger problem, as the Yatter SS turns up with their own throwback to the original series, Yatterwan!

I’m talking about that big dog-like guy, who was Gan-chan and Ai-chan’s first and primary mecha in the original series and the revival. At some point in every episode, when they teetered on the edge of defeat, one of them would throw Yatterwan some special “mecha food”, which would cause it to regurgitate a swarm of bizarre but useful mecha which would help turn the tide.

Another high point of this episode is seeing Elephantus finally get to do something. And by “something”, I of course mean taking on the highest-ranking villain so far and a small army of small robots, armed only with a couple of sticks, and damn near winning.

And after all that, the villagers they were trying to save are too afraid of being saved to accept help. This is where it becomes clear that, as odd as it first seemed to have a 9-year-old in charge of the gang, Leopard has to be 9. Even the most idealistic adult would be having doubts about whether they could achieve anything by now, but to a 9-year-old sense of right and wrong it’s just another outrage that must be avenged in the most direct way possible. So, onward! 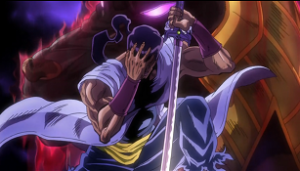 JoJo’s Bizarre Adventure: Stardust Crusaders #28 – Here’s a surprising new twist on the Stand concept (or, the moment when the author has completely forgotten how Stands were originally supposed to work): a parasitic Stand which selects its own user. But it has the misfortune to go up against a practiced swordsman. Polnareff may be an idiot most of the time, but when it’s battle time he’s as smart as anyone in this story, even to the extent of keeping an extra attack secret from absolutely everyone all this time. (Or, the author just thought of it now.)

Fans of the travel documentary scattered in bits through the trip from Japan to Egypt will be happy to see that there’s still some time between fights for some fun local facts and color. 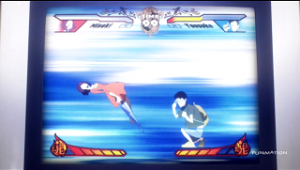 Death Parade #4 – Did you enjoy last week’s interlude? I hope you did while you had the chance, because now it’s time to return to nihilism.

This week’s unhappy pair are abused wife turned reality star Masaki and suicidal stereotypical shut-in Yōsuke, battling it out with the afterlife’s own version of Street Fighter II. For the first time, the players are two people who died separately, and seem to have just been brought together for their potential to, if you’ll pardon the phrase, push each other’s buttons.

Here we also see for the first time that Decim is able to fix the game to pile even more pressure on. And the result of driving Masaki to the edge is that she re-enacts the abuse she herself has suffered on the nearest helpless victim, thus condemning her to the void.

Does that seem outrageous? It does to the Dark-Haired Woman (that’s how she’s named in the credits), who as audience stand-in is quietly growing more and more upset with the system. Could it be that this is all staged for her benefit, and some unknown other arbiter is controlling events from offstage, waiting to see how she’ll react? 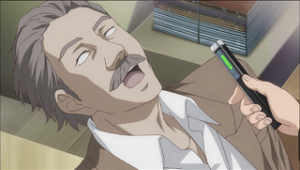 Cute High Earth Defense Club LOVE! #5 – A new challenger appears! Well, a new annoyance, at least. The Press Club has developed an unhealthy interest in the Defense Club, acting at the direction of… a sinister goldfish. Another alien? Allied with Zundar, or another force?

The fight of the week gets short shrift, but it was nice to see that Wombat can pitch in and fight hand-to-hand (or paw-to-tentacle) when necessary. If the threat this time seemed relatively mild, it’s because you’ve never experienced summer in Japan. Take the most hideous, sweltering day you can imagine in some place like Florida, and crank the humidity up another couple notches. It’s brutal, and Japanese HVAC systems are very efficient. The speed at which students start fainting when the heater is turned on at full blast hardly seems exaggerated. 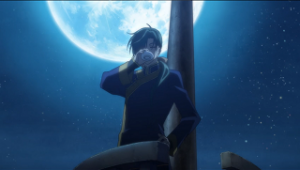 Yona of the Dawn #17 – Now it’s back to Yona and her friends, as they approach Kōka’s main port, where all is not well. (Is all ever well anywhere in a sword-and-sorcery setting?) The local lord has become such a tyrant that his officials accost women in the street and the citizens are rooting for the pirates which sink his ships.

The pirates are an interesting bunch, led as they are by an old woman who’s less their fearless leader than their surrogate grandmother. No doubt she will turn out to have become a pirate only recently, specifically to stop whatever Kumji is up to.

And then there’s the Green Dragon, Jeaha, who has opinions about free will that you don’t normally find in this fantasy story. Many writers would come up with some way to force him into going along with the prophecy, but I expect better of this story. Yona’s going to have to find a way to persuade him to help resist Soo-won of his own accord.