American Civil War alternate histories are one of the most common settings in English language alternate histories. There are a ton of novels, short stories, films, games and comics set in a world where the Confederate States of America won its independence. A variety of creators, both professional and amateur, have taken a shot on putting their own spin on this constant source of speculation. In fact, talking about the Civil War today on the Internet can still lead to flame wars if you are not careful. In a sense people are still fighting the Civil War even to this day.

That all being said, speculative fiction has some great examples of alternate Civil War fiction. There are many tropes and cliches associated with this theme…but not all of them are plausible. Here are five common mistakes usually found in American Civil War alternate histories:

Thankfully you don’t see this mistake often in the text of an alternate history, probably because flags are such a visual representation of a different past. Occasionally you will see some author make the mistake in a self-published work or web original, which is usually a sign of a poor alternate historian, but the biggest offenders are the cover artists who will continually use the Battle Flag to announce to everyone that this is an American Civil War alternate history. To be honest this isn’t that big of an issue, but I personally would like to see more authors and artists make a point to set the record straight on the true flags of the Confederacy.

2) Robert E. Lee as President of the Confederate States 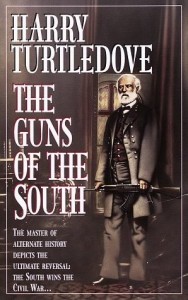 When looking for a president to succeed Davis in an independent Confederacy, many authors turn to Robert E. Lee. It is not a completely ridiculous choice. Lee won numerous victories in the Eastern Theater of the war and today remains popular in both the South and the North. The most famous example of a “President Lee” comes from Harry Turtledove’s Guns of the South. There Lee actually runs on an anti-slavery platform to break the power of the time-travelling South Africans who helped the CSA win the war. Other web originals also make use of the President Lee trope.

That all being said, raising Robert E. Lee to the presidency perhaps shows a lack of imagination or research. Lee never showed much interest in politics, before or after the war, and that probably wouldn’t change in a timeline where the Confederacy was victorious. It is certainly not unusual for a former general to earn the White House (Washington, Eisenhower, etc.) and in this different history ambitious party heads in the evolving Confederate political landscape may try to court Lee. We must remember, however, that the earliest Lee could become president is 1867, just three years before his death in our timeline. Barring intervention by advanced medical science, it is likely Lee would realize the rigors of high office, even for a country the size of the Confederacy, would shorten what little time he had left on the planet. “President” is probably one title Lee would never hold in this or any other timeline.

3) Battle of Gettysburg as a Point of Divergence 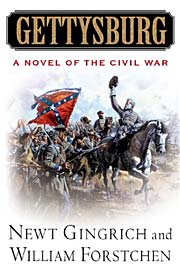 The Battle of Gettysburg is by far the most popular of point of divergence in American Civil War alternate histories. Not only did it have the single largest number of casualties during the war, the battle is often described as a turning point of the war by historians and speculative fiction authors. Whether a Confederate victory at Gettysburg would lead to overall victory in the war, however, is questionable at best. William Forstchen, who wrote the Civil War Trilogy with Newt Gingrich and Albert Hanser, disagrees. In his short story “Lee’s Victory at Gettysburg… and Then What?“, Forstchen speculates that even if the Confederates were victorious at the Battle of Gettysburg, weather, logistics, and the defenses of Washington would have prevented any immediate Confederate victory in the American Civil War.

This sheds doubt on whether the Battle of Gettysburg was an actual turning point of the war and many other historians agree. There are several other battles or events that have been declared to be more influential to the outcome of the war. Perhaps the popularity of Battle of Gettysburg PODs reflects the need to pick a specific and well-known battle to get the reader immediately on board with the alternate history, even if it means overlooking more important theaters and battles of the war. Personally, I rather alternate historians look outside that small Pennsylvanian town.

4) Kentucky as Part of the Confederacy

When creating a timeline with an independent Confederacy, the question arises about what states and territories are to be a part of this new state. Certainly it would include most of the states that seceded, but what about the border states and the territories? One border state that is often included in the CSA is Kentucky. Kentucky was admitted as a state of the Confederacy in 1861 and even earned a star on the flag. Probably because of those facts alone you see Kentucky as a part of the CSA on numerous timelines. That all being said, having Kentucky as part of the CSA is highly unlikely.

For one thing the Confederate state government was a “shadow” government that only represented a little more than half of Kentucky’s counties. Attempts by the Confederacy to invade Kentucky failed and no serious incursions were done after 1862. There just wasn’t strong enough support for the Confederacy in Kentucky to make any attempts to bring it into the CSA. You still see the state as part of the Confederacy, however, on countless alternate history maps. For those to be plausible, you would need a point of divergence where the Confederacy was doing better militarily from the beginning of the war.

Speaking of lack of Confederate support in Kentucky…

Forgetting How Divided the Confederacy Really Was 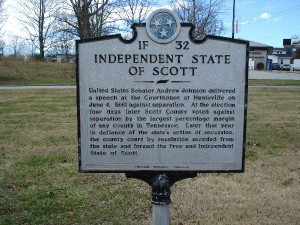 There is a myth perpetrated through history and the media that the South was unanimously behind the secessionists. The truth is far more interesting. In reality, there were plenty of opposition among southerners to the Confederacy. These Southern Unionists are probably most famously represented by the state of West Virginia, but there were other groups as like the Red Strings, the Republic of Winston or the East Tennessee Convention. Prominent Southern Unionists also include President Andrew Johnson, a Tennessean who stayed with the Union and became military governor of his home state. Meanwhile, tens of thousands of southerners fought in Union armies.

Now don’t misunderstand me. By highlight the divisions in the South, I am not trying to imply the North did not have their own pro-Confederacy factions. Nevertheless these groups are often ignored in many American Civil War alternate histories. Any possible domestic opposition to the new nation disappears after a peace is signed. What many authors forget, however, is that it is unlikely this large segment of the population will just move elsewhere, especially the poor who don’t always have the resources to start a new life. In fact many of these groups will no doubt form the opposition to the majority party of Davis and whatever politician succeeds him to the presidency and will propose reforms to fix the Confederacy’s problems, which could lead to the country falling apart as Roger Ransom predicted was a possibility in his book The Confederate States of America.

This list isn’t meant to be an exhaustive list of all the issues inherent in American Civil War alternate histories, but it includes many of the problems that are most notable to me. If there are any implausible tropes, tired cliches or historical misconceptions that routinely bug you, please share them below.

A speculation perhaps one step too far….

Do kids really still talk like that? Apparently so.

How to Slate Without Recommending