A faint and distant breeze stirs the smoke drifting from the brazen pot over the flame. Looking intently into the shimmering liquid in the pot, carefully adjusting the philosopher’s stone of Nostradamus, the future begins to take shape and form in the present.

Gosh! Don’t we all wish peering into the future, and making those New Year predictions was that easy, awe inspiring, and supernatural. A standard of fanzines over the decades has been for those so inclined to take a stab at forecasting upcoming events.

During Rog Phillips’ reign as conductor of THE CLUB HOUSE he would often key in on choice or obscure predictions. Not much ever came of these predictions, but they were fun to read, especially the more obscure ones. Art Rapp and Hannes Bok were two of the regular prognosticators of their generation. Hannes was also noted for his astrological charts, although, from all accounts, they were more fun than accurate.

Still, all this woo-woo stuff resonates. Who doesn’t read their Chinese fortune cookie message with interest, sincerely trying to make it work?

When I was a youngster I thought that this was the essence of science fiction…extrapolating the future from the puzzle pieces of the present. Sometimes nowadays whenever I read the newspaper I’m brought up short, forced to take a second glance, and wonder if I’m reading a science fiction article rather than front-page news. Who really needs a crystal ball to tell our future?

So, how does this relate to science fiction?

The basic flaw with the post-WWII view of this genre was the intrinsic belief that science will not only triumph over all the problems of the day, but that science alone will solve all the problems mankind faces. Robert Heinlein was a firm believer and champion of Science as Savior. In his book, Stranger in a Strange Land, he has everyone traveling in flying cars. I just got back from a trip to Los Angeles. After wading through hours of rush hour traffic with a host of reckless drivers, I wonder how that would play out in 2014. I was a pilot in the Air Force and watched as half of my squadron dropped out due to lack of aptitude and airsickness, and these were all highly qualified and capable people.

This is my current fear about science fiction. It has become a promoter of Science as Savior. The genre reflects the naivety of our contemporary society. Oh, there have been several writers aware of this flaw, Mack Reynolds, that world-traveling expatriate, used a sociological view to work out his extrapolations. In their collaborations, Fred Pohl and Cyril Kornbluth came incredibly close to actually predicting how our society would actually lurch along into the future.

Looking into our future, I shudder. No crystal ball required. No question about it. Science won’t be saving us. A buddy of mine was just chortling to me, telling me that he is moving to Colorado to partake in the newly legalized marijuana culture. He told me that he’d been waiting for this day since becoming a hippie in the mid-60s. I didn’t want to be a buzz-kill, but bet him that the ice cap on the North Pole would completely melt before our country would completely legalize pot.

Sorry folks, but there will never be any faster-than-light starships with internal Star Trek gravity generators that never fail in any crisis, even when the engine explodes. This doesn’t mean that star travel is out, although artificial gravity will never happen (sorry Hollywood).

Science will not save us from ourselves. In order to do that, we must all grow up, take responsibility for all of our actions, and their dire consequences, and at long last take the appropriate action. However, the pessimist in me tells me that this will never happen in our current civilization. For far too long we’ve been taught and indoctrinated from birth to sacrifice ourselves on the wheel of daily toil with some (equally ludicrous) belief in an afterlife, and blind faith that someone else (not us) will some day (but in time) somehow (but without any input from us or any inconvenience to us) solve all the problems of the world. So, instead of each of us being good shepherds, mentoring the next generation, and preserving the world, we remain self-indulgent children destroying the only planet we will ever know.

It does not take a Nostradamus to predict that a very unpleasant wakeup call is shortly forthcoming.

Science fiction has always been the bellwether, leading us into the future, showing us several possible paths and leaving it up to us to choose which one to travel. Free will always. Now the daily news is leading us and science fiction has taken a back seat and is following. Science fiction has lost its way. It has been replaced in the imagination of the masses with stories of vampires, the walking dead, and mutants, all sociological revenants positioned as alternative solutions to the problems of our society, those very problems that it is becoming clear science will never solve.

My final fear is that science fiction, that literature that I have loved so well and for so long, is a failed genre as such. The hopes and dreams of entire generations captured in countless science fiction stories has failed to teach or lead us away from the catastrophic disasters looming on the ever approaching horizon. I worry that in a few decades, as climate change takes center stage in all of our lives, that science fiction will completely disappear as a thriving genre; just like the lost civilization stories of our grandfathers’ generation have largely disappeared.

To sum it all up, I guess every generation has to ask: Who Killed Science Fiction? A sad question, with a sadder answer: After all…it was you and me.

Well, so much for a realistic view of the future of science fiction as a literature, it’s time to return to the present and review our current batch of fanzines with an eye toward New Year predictions and relevant (ideally not overly optimistic) alternate views to the future of this genre. 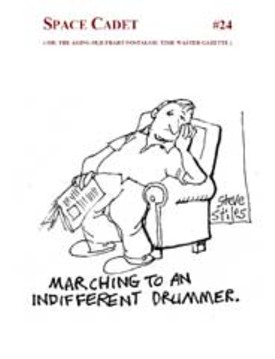 Space Cadet #24: December 2013. Monthly. 18-pages. Edited by R. Graeme Cameron. Appropriately subtitled: The Aging Old Fhart Nostalgic Time Waster Gazette. So readers of this zine are fairly warned by Cameron. Cover art by Steve Stiles. After a very brief, nearly obscure editorial comment by Cameron relating to the last issue (you have to read the last issue to understand this editorial), Taral Wayne kicks off with “The True Meanies of Christmas,” wherein he takes on the Ayn Rand Objectivist viewpoint that Scrooge (Charles Dickens’ charming character from A Christmas Carol) was really a hero. It’s pretty clear that Taral opposes this view as he takes them to task in detail, ending by wishing members of Ayn Rand Institute should be given Atlas Shrugged as a Christmas gift and “forced to read it.” Say, Taral, this isn’t logical. Members of this group have clearly read this book and enjoyed it. They don’t think it is a bad book, whether a gift or not. If you need to punish them for their opinions, don’t you think that working under Scrooge for the year, under the conditions Dickens described, would be more appropriate? It would certainly test their integrity and the strength of their beliefs. Next we have Taral Wayne again in another opinion piece, “Reaction to ‘Nasty Rumours, or, How Negative Can We Get?’” Loosely, Taral tells us that he is a fanzine writer of the old school, that it is a hobby for him, and it just happens to be about science fiction, but could have been any genre. Cameron in his “Editorial Comment” response takes a sidestep, not discussing fanzine publishing just for the sake of fanzine publishing, and instead tries to interject a semantic solution to this loosely framed ongoing debate about old and new fandom. Cameron’s attempt doesn’t work for me. A rose is a rose is a rose, labeling it something else doesn’t make it something different. Next Neil Williams steps into the debate with “Further on ‘Nasty Rumours’.” It appears that the thread Williams follows is in support of fanzine writing for the sake of fanzine writing (this is an over-simplification of the debate…sorry…read it and get involved). In his editorial response, Cameron comes back with an anecdotal, semi-autobiographical account of his relationship to both fandom and fanzines. Taral Wayne follows this with “A Pocket Full of Histories: Coin Notes,” as I’ve said before, fandom isn’t just about stamp collecting. Letters of Comment fill up the rest of this issue. In regards to Ed Beauregard who writes: “Thanks for the heads up on Terry, the other Earl Kemp.” I’m the real Earl Kemp. My name is Earl Terry Kemp. Earl is my first name. Pop, the person people think is Earl Kemp, is not. He has always gone by his middle name of Earl, unnecessarily causing much confusion, and forcing me for the first time in my life to use my middle name for public and professional purposes. Pop doesn’t like his first name. 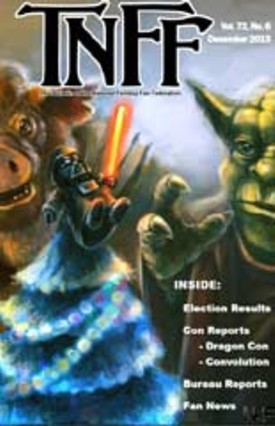 The Bulletin of the National Fantasy Fan Federation v72 n6: December 2013. Monthly. 24-pages. Edited by David Speakman. This is the OO (official organ) for this fan club. Cover art: “New Year Force,” by Sergey Kostik. Lists 2013 officers. The “Letter from the Pres,” (David Speakman) tells of current changes in the organization. Next come the “Election Results.” Several con reports follow. A lot of club related stuff follows. Of some note is the “Short Story Contest Update,” by Jefferson Swycaffer. Interested writers can submit their stories without a fee this year. There is a nice obit for Fred Pohl written by Jon D. Swartz. There is a long calendar of upcoming 2014 conventions. For those interested, the next to last page has a club membership application. 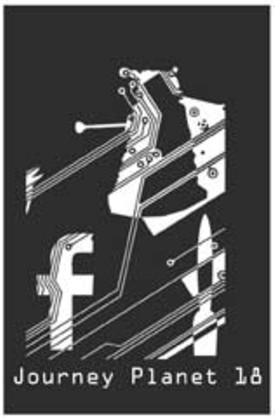 Journey Planet #18: December 2013. Monthly. 51-pages. Edited by James Bacon, Chris Garcia, and Helen Montgomery. Editorial by James Bacon. Cover art: “Fandom Connectivity,” by Dan Berger. “So Why An Issue About Social Media and Fandom?” by Helen Montgomery, wherein Helen succinctly sets the stage for this issue. Loosely stated this issue is devoted to social media and its interrelationship with fandom. All the various articles have been published anonymously in order to preserve the continuity of the debate as a whole, rather than allow it to become about one individual or another. As a whole this issue and approach is very interesting. Essentially it is a very long essay, with the main argument framed and reframed by each new anonymous writer. Much of the repetition should have been edited out, but remains, clouding the clarity of the discourse by confusing the main point and making it somewhat difficult to determine what that main point might be. However, this is only a minor flaw. Clearly this is an important zine and needs to be read and re-read in order to understand all the nuances of the various arguments. I suspect that the next issue will reflect this in the letters of comments received.

Well, that’s it for this week folks. I’m late back from vacation. I’m late with my deadline. Heck, I’m late, very late, for a very important date. But don’t despair. Look for more fanzine reviews next week in this, your favorite column, The Club House.