“It takes the materials of everyday entertainments—pulp heroes, movies, comics, detective stories—and transforms them … into a gestalt that is fresh …” Harlan Ellison 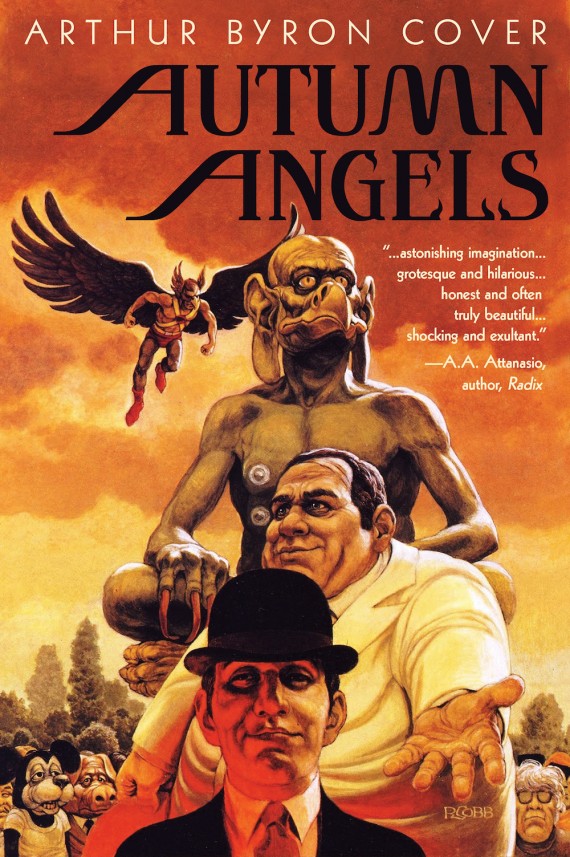 “Autumn Angels is a feast of strangeness populated by extraordinarily exotic, and yet deeply human characters. In part satire, in part thought experiment, Arthur Byron Cover’s book is an exploration of the meaning of humanity, and is filled with enough wild images and witty dialogues to equal five books by a lesser writer. A must read.” –Steam Dave, Amazon

This edition features introductions by both A. A. Attanasio (author of Radix) and multiple Nebula and Hugo Award winner, Harlan Ellison, as well as a very special Afterword about the writing of the book by Cover.

Digital Parchment Services is especially excited to be able to present this new edition with the stunning cover painting by Ron Cobb, the internationally acknowledged artist and illustrator who worked on films such as Star Wars and Alien, from the original edition.

The ebook edition of Autumn Angels is available now – with a trade paperback edition premiering in January, 2015.

“Three Godlike men (the lawyer, the fatman and the demon) … seek to give a godlike humanity depression, in an attempt to make their race seek purpose and become the ultimate species in the universe. What follows is … a novel which plunges you into an original sci-fi world which raises thought provoking questions throughout the plot … fast paced with engaging and unique characters … thought provoking and emotive … Buy it now or I will send you to the antimatter universe.”

The book that ushered in the 21st century – in 1975! So far ahead of its time that no one knew what to make of it!

“…recommended to readers of Douglas Adams or Terry Pratchett.”

Autumn Angels is a fast moving, anarchistic romp, filled with pop culture references, in which the clichés and conventions of sci-fi are used as slapstick props, written four years before Douglas Adams’ Hitchhiker’s Guide to the Galaxy–

“It takes the materials of everyday entertainments—pulp heroes, movies, comics, detective stories—and transforms them … into a gestalt that is fresh … the lawyer is modeled after Doc Savage’s sidekick, ‘Ham,’ Brig. Gen. Theodore Marley Brooks; the fat man is Sidney Greenstreet; the gunsel is Elisha Cook, Jr. in The Maltese Falcon; the Big Red Cheese is Captain Marvel; the Insidious Oriental Doctor is Fu Manchu; the Queen of England who calls herself a virgin is Elizabeth I; the ace reporter is Lois Lane; the zanny imp from the Fifth Dimension is Mr. Mxyzptlk, and both the imp and Lois are, of course, from the Superman comics; the godlike man with no name is Clint Eastwood in the Sergio Leone-directed spaghetti westerns; the galactic hero with two right arms is Harry Harrison’s Bill, the Galactic Hero; the fuzzy (but boring) little green balls of Sharkosh are Star Trek scenarist David Gerrold’s tribbles; and you can figure out for yourself the true identities or esoteric references for The Ebony Kings, the poet, the shrink, the bems, the other fat man and his witty leg man, and on and on.”

“…agile inventiveness … extraordinary salience and outlandishness … astonishing imagination … grotesque and hilarious … honest and often truly beautiful … shocking and exultant … nothing like the usual SF fare. I read it through in one sitting.”

–A. A. Attanasio, author, Radix

Read Autumn Angels now … you’ll be glad you did!

The Science in Fiction: Mindfield: Parlay at Ologo by Cindy Koepp

A Defining Moment for Science Fiction