Wally Wood – the great one 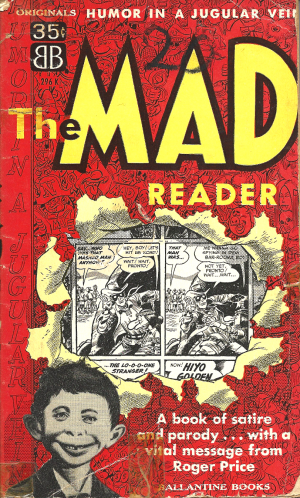 Wally Wood remains my favourite. I measure all other illustrators against his best work. Not an easy thing to do, because his trademark style was close to being unique, except for his many imitators. In fact I judge illustrators according to how well or how poorly they imitate Wally Wood. Even now, more than thirty years after his death. Odd, isn’t it?

So why did Wood have such a huge impact on me? The usual thing. Early childhood impression creating an instant ongoing nostalgia for anything Wally Wood did. Anticipatory nostalgia you might say. For me Wally Wood, throughout my life, is timeless. Today I love his work neither more nor less than when I first encountered his style in the pages of a beat-up old pocket book my brother gave to me (which I think he acquired in a used book store) titled “The Mad Reader.” A reprint of Classic Mad comics, it was the ninth edition in only four years, dated 1958. Shows you how popular Mad was at the time. I think he gave it to me round about my tenth birthday in 1961.

Bear in mind that Mad Magazine started out as part of E.C.s line of colour comic books. Issue #23 in May of 1955 was the last. Because of the institution of the Comic Book Code, E.C.’s horror line could no longer be published. Even their SF comics ground to a halt. They were replaced by some fairly insipid comics devoted to pirates, doctors, and the like. Nowhere near as innovative and exciting as the original E.C. comics, so they quickly faded out of view. Only the B&W Mad Magazine remained.

When I first eyetracked “The Mad Reader” I enjoyed ALL the reprinted articles. Most were spoofs of comics or TV shows I was familiar with, and even the targets I knew nothing about were quite funny because of the way they were spoofed.

But what particularly caught my attention were a couple of spoofs illustrated by Wally Wood, especially “Flesh Garden.” (The opening panel reproduced below.)It was just so incredibly weird. I’d never seen a monster like that anywhere in comics or movies or TV. What got me was its enthusiastic attitude. And ‘Flesh’ was not at all what I imagined an SF hero to look like. HIS attitude was different too. Refreshingly different. I also liked Wood’s attention to detail, with all sorts of things thrown in that added to the ambience. Real cool stuff! 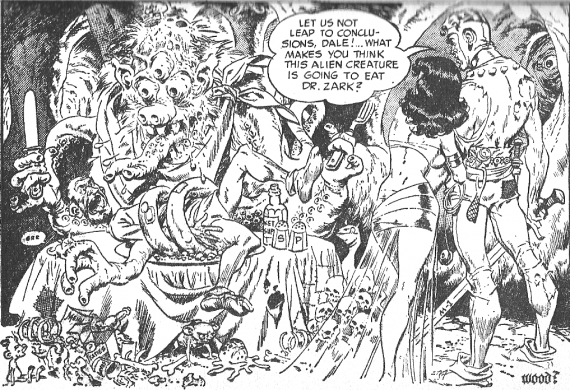 A couple of decades later I was able to acquire about half of the original Mad comics. They were somewhat damaged and faded, but it was a joy to have them. Then one of my periodic bouts of unemployment saw me selling them to raise needed cash. Whenever the real world interferes with my fannish life I turn melancholy indeed.

But you never know when the worm will turn. In the late-eighties I purchased a number of Russ Cochran’s hard bound sets of EC comics, all of which were printed in black & white to save expense, with the singular exception of the Mad comics which were reproduced in their original glorious colour. So below is the same Flesh Garden panel as it originally appeared. 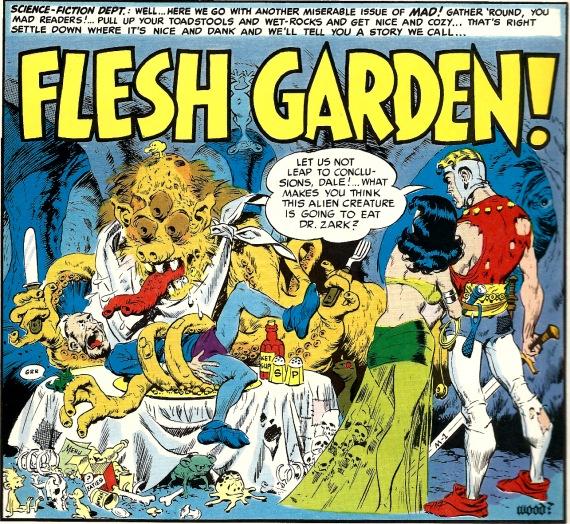 Wonderful, isn’t it? Or at least I think so.

In the fifties Wood worked pretty well full time for Bill Gaine’s EC Comics. Not often for the horror comics, but frequently for adventure comics like “Two-Fisted Tales” and “Frontline Combat”, and especially often for the EC science Fiction comics “Weird Science” and “Weird Fantasy”. It didn’t hurt that the stories were often remarkably similar to published SF, most famously Ray Bradbury’s works. He dropped them a line saying how pleased he was to see his work in comic form but wasn’t it a pity they forgot to mention his name. They quickly struck a deal. At least eight of his stories were adapted by EC, two of them illustrated by Wood, namely “There Will Come Soft Rains” and “Mars is Heaven.” In 1966 they were published by Ballantine Books in a paperback anthology titled “Tomorrow Midnight” which is where I first saw them, as none of my neighbourhood friends or their older brothers had any EC comics, too much generational time having passed.

“There Will Come Soft Rains” just about the most heart-rending and sad story ever to my young impressionable mind, considerably enhanced by Wood’s evocative art. The tale is all about an automated house carrying on its normal routine despite the fact atomic war has slain the family that once lived there, their shadow silhouettes burned into an outside wall to form a permanent mural as happened to at least one individual at Hiroshima. The family dog, all skin and bone, coming home to die. Near brought me to tears. Wood and Bradbury a good combination.

But mostly, as I grew into a teenager, I knew Wood through his contributions to Mad Magazine. Here is the first panel of his other contribution to “The Mad Reader,” as reproduced years later by Cochrane in the original colours. 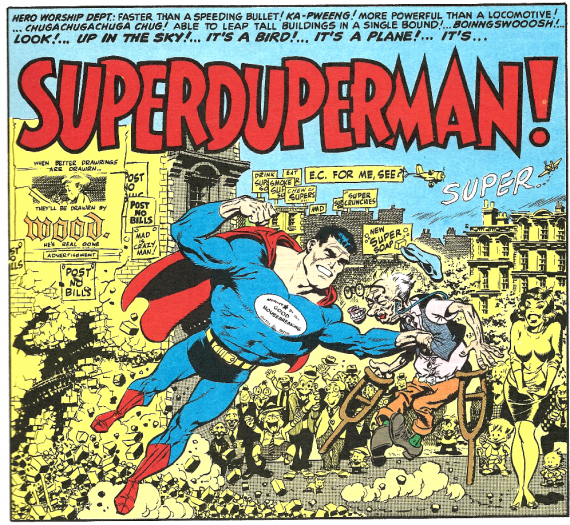 Note “Lois Pain” on the right. She is wearing the mother of all 1950s tight-fitting sweaters. This is very typical of Wood’s heroines. Even when fully clothed, they look pretty much naked. Quite exciting for a young boy. Nothing like that on television, or in the magazines (my dad kept his playboy collection in the attic where it was very much out of my sight, at least till one day when my curiosity got the better of me and I hauled a ladder from the basement to the second floor to see what was beyond the panel in the ceiling. A whole ‘nother reality it turned out). Point is, the fifties were a very repressed time, so the exaggerated sexuality of Wood’s women, spoofing the blatent sexuality “hidden” in comics and movies, was rather startling and eye-opening. Gave me much food for thought it did.

Note the self-portrait of Wood on the left, depicting him at work at his drawing board. The caption surrounding it reads: “When better drawrings are drawrn, they’ll be drawrn by WOOD. He’s real gone.” This is the sort of gag Mad artists loved to include in their work. 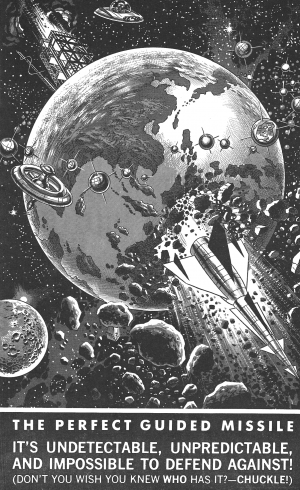 Of course, by the time I started collecting Mad Magazine the EC comics had long since folded. Much of the material Wood wound up illustrating were gimmick humour items rather than spoofs. For example, issue #47 in June of 1959 featuring his take on Sid Caesar as “The Professor” lecturing on the space race. It was actually written by Caesar so is pretty amusing, but Wood was reduced to drawing the assorted mug shots typical of Caesar’s TV appearances. He did manage to sneak in some miniature rocket ships and jet planes scooting over the heads of the TV audience though, which is very cool.

More to my taste in the same issue, a gag spoof of the arms race depicting the “Greatest Missile Ever Built Blasts Right Clear ThroughThe Earth! Simply aim it anywhere! The Inner Space Guided Missile is simplicity itself. All that is necessary is to decide upon the country you want to blow off the face of the earth, calculate the aim, and fire!” A brilliant concept, the writer is not credited. Perhaps Wood himself?

The main panel is vintage Wood. You got your Flying Saucer, your little mouse in a satellite, your “Moxie” constellation, your 50s style space station, and even an outhouse on the bottom of an Earth asteroid blasted into space. Lots of nifty detail in other words. Wood noted for that.

But what I have always particularly been fond of in much of Wood’s art is his knack for illustrating machinery and technology. He has no problem portraying shiny-surfaced futuristic buildings, or gleaming rockets and glistening flying saucers, but the uncanny way he utilizes shade and light to depict much-used functional-looking machinery inside space craft or ruined buildings has always astonished me. He seemed to do this so much better than anyone else. Heck, sometimes just the way he depicts light glinting off a pair of sunglasses is riveting. Maybe that’s the attraction. He didn’t just draw things, he explored texture and reflection and shadow above and beyond what the set-up required. He was constantly experimenting, constantly trying out new approaches, and often throwing in little gags as a sort of personal signature. You didn’t glance at Wally Wood’s art, you explored it. 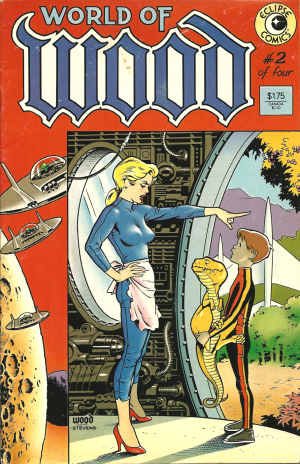 The cover of “World of Wood” #2 captures both his approach to machinery and, ahem, his penchant for fully-clothed naked women, not to mention his sense of humour. The comic in question is another reprint anthology, one which reveals that, although many, myself included, think of him primarily from his Mad/EC days, in fact he experienced a second if minor burst of glory with the advent of underground comics, contributing many stories both illustrated AND written by himself to various comics, most notably “Witzend .”

However, financial security was less forthcoming than when he had been a prolific part of the EC ‘stable.’ Throughout the sixties and seventies he really had to scramble as a freelance artist, appearing in magazines as diverse as Castle of Frankenstein, Cosmopolitan, Mechanix Illustrated, Galaxy, Amazing Stories, Comic Book Price Guide, Spaceman, and even the Woodwork Gazette. Adult magazines paid well, so he also appeared in such as Cavalcade, National Screw and, yes, of course, Playboy.

Financial pressure forced him to diversify. There is nothing wrong with that. Basically it is what all professional illustrators must do if they are to survive. But I’m afraid the quality of his art suffered. By that I mean that much of his more “commercial” work, while still technically competent, was virtually devoid of the trademark Wood style to the point of not resembling his best and most personal work at all. Gone the extra details. Gone the playful experiment with light and reflection. Just drawings really. Hardly ‘art’ in any sense.

I don’t think it bothered him. I suspect there was work he did to pay the bills, work which he conscientiously crafted to suit the needs of the customer, so much so that it wasn’t really ‘his’ art as it was ‘their’ art. No shame in that. Where he continued to shine was the work he did on his own dime, so to speak, work where he continued to stretch the envelope of his own capabilities, work meant for publications whose readers enjoyed excellent graphic art for its own sake. That would be the art he truly enjoyed, the art which made life worth living.

Unfortunately he suffered a stroke in 1978 which robbed him of his ability to draw what he wanted to draw. He COULD still create graphics of a sort, but devoid of a surety of line, mere schematics, really, compared to what he envisioned in his mind. He still earned money. But he felt drained of talent and skill, felt he had lost his ‘art.’ The loss became too much for him and he committed suicide in 1981.

I try not to think of wood in his latter days. I look back to his beginnings. There was an optimism and excitement in his EC art that never failed to communicate itself to the viewer. Consider the panel below.

Yes, the technology depicted is hopelessly archaic in our modern time, it represents today a kind of alternate reality which never came to be. But back in the day, and even now as I gaze upon it, it is a timeless evocation of the wonders of the future hovering just beyond the horizon. These two frames speak volumes to me. This is the future that should have been, dang it. I really believed in it when I was a kid. I still sorta believe in it now. Wood is responsible for this. 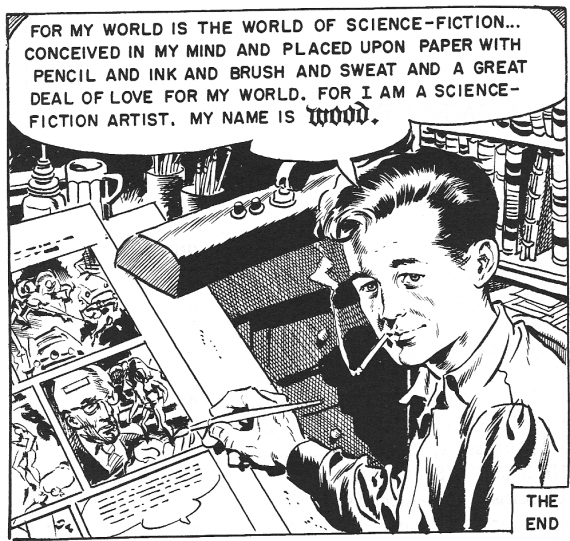