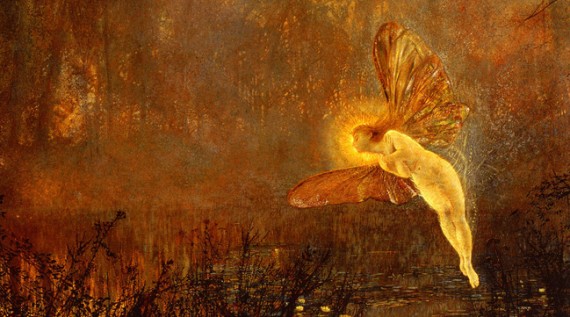 Do you believe in fairies? 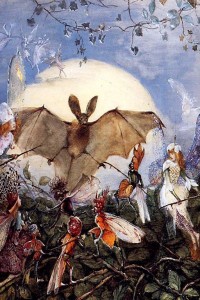 J. M. Barrie’s original stageplay version of PETER PAN asks this very question of its young audience when Tinkerbell drinks poison intended for Peter. The children in attendance are asked to clap their hands if they believe in fairies and in so doing save Tinkerbell’s life. Belief in fairies keeps them alive.

Fairies are staples of European folklore and originally included all manner of mythical creatures including goblins and gnomes and even demons. Over time, and specifically during the Victorian period the idea of fairies took root as tiny winged creatures whose evils amounted to little more than mischief. These diminutive creatures were often said to be driven into hiding by invading humans.

Although human in appearance themselves, there is a definite sense of otherness about them. Fairies are somehow more connected to the natural world than we are and the advent of technology that began to disrupt the pastoral landscapes – the “Dark Satanic Mills” as described by the poet William Blake – the blight that the industrial revolution created upon the landscape was blamed for driving them further into hiding. 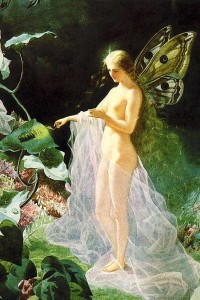 Indeed. it was the reaction against the Industrial Revolution that created the Romantic movement that gave rise to the Victorian obsession with fairies and the popularity of fairy paintings.

According to Jeremy Mass in his book Victorian Painters (Harrisoin House, 1969):

“Fairy painting was close to the centre of the Victorian subconscious. No other type of painting concentrates so many of the opposing elements of the Victorian psyche: the desire to escape the drear hardships of daily existence; the stirrings of new attitudes toward sex, stifled by religious dogma; a passion for the unseen; the birth of psychoanalysis; the latent revulsion against the exactitude of the new invention of photography.”

Victorian fairy painting expeirenced its heyday during the 1840’s and was driven by the desires for new kinds of art among the growing middle classes. It combined pastoral paintings, narrative images and, in many cases, nude figure studies in a way that was just palatable enough to the Victorian public’s sensibilities. 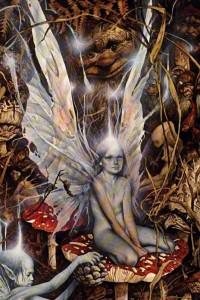 Richard Dadd was an early celebrity among Victorian fairy painters. His work began with depictions of the fairies from Shakespeare’s play A Midsummer Night’s Dream. His career as a painter had much success before madness eventually overcame him. He murdered his father and spent the last forty-three years of his life in the criminal lunatic ward of Bethlem Hospital.

Other Victorian painters took to the genre and found great success at it. Joseph Noel Paton, John Anster Fitzgerald, John Simmons, Robert Huskisson, and John Atkinson Grimshaw, were among the artists who developed a popular following for their work which mixed fairy scenes with eroticism and dream imagery. 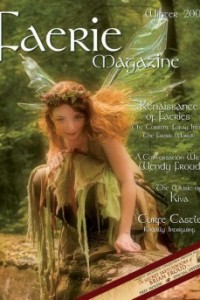 The advent of photography eventually superseded the prominence of paintings on the mantles of the middle class. Ironically, it was photography that led to a resurgance of fairy obsession with the photographs of the notorious Cottingly Fairies. Although today understood as a hoax, the photograsphs taken by two children, Elsie Wright and Frances Griffiths in England in 1917 caused a sensation and fooled many including Sir Arthur Conan Doyle.

Today depictions of fairies is confined mostly to genre illustrations, most notably those of Brian Froud. Froud and Alan Lee’s book of fairy illustrations, Faeries, released in 1978 caused a resurgence of interest in the genre and, indeed, the idea of the Fairy is still strong in the minds of many. There is even a monthly magazine devoted to all things Faerie.

Today’s environmental movement may well have grown out of that Victorian desire to hold on to a disappearing natural landscape, however, it’s current brand of eco-warriors and big business fundraising leaves little room for imagination. The chanting and protests seem only to drown out the soft tinkle of fairy laughter that seems to emanate from the depictions of these fey creatures.

I had a spurt of reading energy so instead of giving you three weeks of reviews I decided to bundle them altogether into one article. Luckily for me I get to review books from two of my favorite authors. First up is The Place of Dead Kings by Geoffrey Wilson. Sequel to Land of Hope and Glory, […]

Space Brothers #57 – Everyone caught that piko-piko is the Japanese onomatopoeic equivalent to “beep”, right? So we all know how the author picked Pico’s name? Well then, let’s talk about a slightly less obvious one: Takio Azuma, one of the astronauts coming up to take the next shift at the moonbase. He’s almost certainly […]

Blast From the Past: Suncon the 35th Worldcon, Hugo Awards Banquet Audio (Including Notes on Diversity)