…and Amazing Stories has an exclusive to accompany it:  a Bixby short not in the collection, with an introduction by his son!  You can read that here today on Amazing Stories 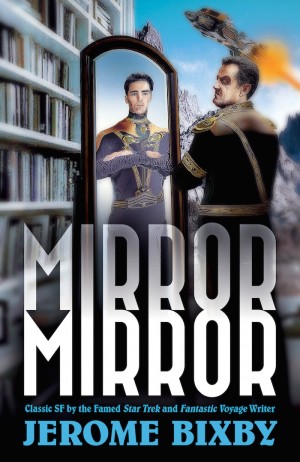 Is Proud To Announce The Publication Of

Before he wrote four fan-favorite Star Trek episodes (receiving a nomination for the coveted Hugo Award for Best Dramatic Presentation), and the screen story for the movie Fantastic Voyage, Jerome Bixby (1923-1998) was a highly regarded professional science fiction magazine editor and writer remembered for his “yeoman work in raising the standards of the science fiction action story (…) whose own stories, though few, are much sought after by discriminating readers.” (Science Fiction Stories, 1953)

Bixby soon left magazine editing for Hollywood, where he wrote a number of low-budget, late-1950s monster movies including It: The Terror from Beyond Space (the acknowledged inspiration for Alien), and landed scripting chores on the documentaryesque early science fiction television series, Men Into Space, before striking it big when he sold Fantastic Voyageto a studio.

Jerome Bixby is best remembered, however, for the four episodes he wrote for the original Star Trek television series, and is much revered by series fans for introducing, in “Mirror, Mirror,” the concept of the “mirror universe” where The Federation and Kirk, Spock, et al, are all their evil exact opposites in character and deed.

Bixby also wrote three other episodes, “By Any Other Name,” “Day of the Dove,” and, “Requiem for Methuselah,” all of which critics and fans rank among the best in the series.

Fans of all types will thrill to learn that this first-ever collection focusing on Jerome Bixby’s science fiction will showcase a trio of never-before-reprinted novelettes containing ideas that Bixby would later mine and transmogrify in two of his highly regarded Star Trek episodes, “One-Way Street” and “Mirror, Mirror” (both used in the ST script “Mirror, Mirror”) and “Cargo to Callisto” (used in “By Any Other Name”).

The collection also contains Bixby’s most famous short story, “It’s a Good Life,” memorably dramatized first on The Twilight Zone, then in the Twilight Zone Movie, and finally reinterpreted for the twenty-first century on the series 2002-3 incarnation, in “It’s Still a Good Life.”

Other Bixby classics include his first SF story for a pulp magazine, “Tubemonkey” (1949), and his very last, “The God Plllnk” (1964). You will also find a half-dozen other “lost” stories and novelettes reprinted for the first time since their original magazine publication in the 1950 and ’60s.

Mirror, Mirror was edited and features a long personal Introduction by his son, screenwriter and producer, Emerson Bixby.

To be released in both trade paperback and as an ebook, “Mirror, Mirror Classic SF by the Famed Star Trek and Fantastic Voyage Writer” is a collection with something for everyone; it’s for fans of pulp magazines, for fans of good science fiction writing, and for every fan who has ever journeyed along the space lanes with Kirk, Spock and McCoy.

Digital Parchment Services ebooks and paperbacks are available online through Amazon, B&N, and other sites, while our ebooks debut at Amazon for Kindle, and other platforms and bookselling sites to be announced.

The Resurgence of Oral Storytelling: the Audio Book

Black Mirror’s thesis is exactly what its title suggests: a dark reflection of ourselves.

Three Laws Lethal shines in its exploration of the future consequences of incorporatng AI into our societies.