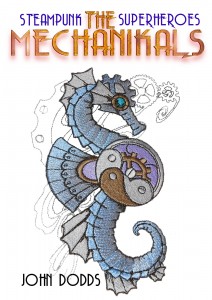 To a fan of science fiction, the three key elements to a successful story are strong credible characters, a solid enticing plot, and a creative world suited for the first two elements. In the Steampunk genre, these elements are even more prevalent in the pretext of believability because of the historical familiarity of a Victorian era mixed in with the fantastical components of science fiction. The Mechanikals by John Dodds from Amazon Digital Services, Inc. is such a story and can be found here at Amazon.com.

At the onset of World War I, orphaned factory worker Edwin Bryce is a young man seemingly destined to live out his days in the plight of the destitute city. But after witnessing “secret doings at the factory, a burning policeman, a spying dog, a weird creature, and a sky borne man in leather armor,” Edwin is suddenly drawn into the dark mysteries of an evil world he never knew existed.

The oddities around him continue to build as his once blind eye is miraculously repaired by an old friend using unfathomable technology. This is where the young man learns of his new powers and is introduced to the world of the Mechanikals, a faction of heroes determined to defeat the enemies of the city.

The characters are meticulously developed to suit the plot and do not seem over dramatized (as can often happen in the Steampunk realm). In a story centered on superheroes, the plausibility of fantastic ideas is comfortable and seems to fit well. Placed in the environment of such a harsh world using clear-cut imagery, the reader is allowed to enjoy the story without the distractions of credibility common in this kind of work.

For a brief glimpse of the book The Mechanikals, you can find the first four chapters in the Amazon.com “Look inside” feature. But for an even more delightful experience, you can check out a reading of the first chapter on YouTube along with a personal introduction by the author himself, John Dodds. There is perhaps no better interpretation of a work of literature than from the voice of its creator.

The Mechanikals by John Dodds is the first installment in a new YA Steampunk series. It is a strong beginning to an absorbing and entertaining world of wonder. And if this isn’t enough for you, check out John’s amazing blog work here at Amazing Stories.