Home Fandom In Memory of Susan Wood, a Wonderful and Influential Fan 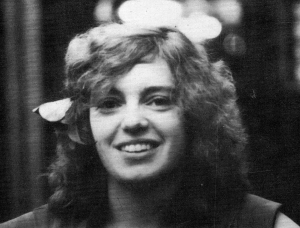 Susan was a renowned Canadian BNF (Big Name Fan) who won the best fanzine Hugo in 1973 (jointly with her then husband Michael Glicksohn) for their fanzine Energumen. She also won twice for best fanwriter. From 1975 on she was Assistant Professor of English at UBC where she taught, among others, William Gibson. She was well known worldwide for promoting feminist panels at SF conventions, including and especially Westercon 30.

To give you an idea of her writing accomplishments, she wrote book reviews, articles and essays for Pro & Semi-Pro zines Amazing Stories, Locus, Agol/Starship, Science Fiction Review, The Washington Post, Pacific Northwest Review of Books,  and more. She also guest-edited an edition of Room of One’s Own, a quarterly feminist anthology out of Vancouver B.C. Among the fan publications her work appeared in were: Energumen of course, her own zines Aspidistra and Amor, also Genre Plat, Osfic Quarterly, Xenium, Kratophany, Outworlds, FAPA, AnzAPA and A Woman’s APA. In 1980 she was nominated again for a Hugo, this time for her editing of a collection of essays of Ursula K. LeGuin titled The Language Of The Night.

Susan also devoted much time and effort to Vancouver’s annual convention VCON, the BCSFA ( British Columbia SF Association ), and people she knew in BCSFA. She collapsed from a fatal medicine interaction while on her way to class. Her family donated much of her fanzine collection to BCSFA where it forms the basis of the current archive. Susan was a rising star, still sorely missed by all her friends.

SUSAN ON FEMINISM IN SF

“When I first entered Fandom, in the mid-’60’s, I noticed two things. First, I thought I had met my kind of people, at last. They talked to me, seriously, about books, politics, ideas. They did not (for the most part) play silly sex-role games, those games in which I was a misfit ‘girl’ in the ‘real’ mundane world. They accepted me as one of themselves.”

“They accepted me as an honorary man.”

“What do I mean by ‘honorary man’? Well, I mean ‘human being’ – sort of. In the 1960’s, an honorary man was a female person whom you did not treat either as a silly nuisance, or as a sex object…. You said, ‘Gee Susan, you’re just like one of the guys,’ meaning ‘How nice it is to talk to you. You aren’t silly, like those other girls.”

“An honorary man is a woman who is accepted as ‘an individual’ provided that she does not, ever, remind her companions that she is a woman too.” 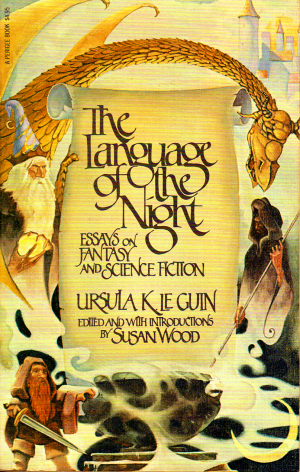 However, as time went on, Susan grew more and more uncomfortable with her role as an ‘honorary man’ in a fandom seemingly incapable of change, let alone progress. She formulated a number of needful proactive viewpoints, such as the following:

“Human Dignity Action: No more belly-dancers brought onstage in chains. No more striptease acts, making sexuality into something ludicrous for 12-year-olds to snigger at. No more dirty-joke panels. No more masquerades that serve only the exhibitionists and the chauvinistic photographers. Yes, I was persuaded to be in a masquerade group once, in sheer chiffon ‘and leave your bra off.’ The discomfort I felt grew as I watched the other participants: it was 1974, year of the naked slave dancers and chained women of Gor. Putting on fancy dress is fun; so dress as a proud, beautiful Queen, or a joyous Free Amazon. No more chains! We are adults, and it is not ‘adult’ or ‘liberated’ behaviour to use our conventions to degrade human beings…”

Susan took a lot of flak for this kind of thinking:

“It’s been a slow, sometimes painful journey… friends who liked me when I laughed with them at anti-women jokes now dismiss me as ‘bitter’ and ‘crazy’… Other ex-friends urge me to ‘stop knocking fandom’ or stop trying to ‘destroy’ fandom  by ‘erecting barriers’ (which are already there).”

“What, I’d like to know, does the spectacle of an almost-naked dancer, carried onstage bound hand and foot, to perform for the drooling masters, have to do with science fiction? Or with adult behaviour in 1977? At this point, I walked out of the 1977 Westercon masquerade in disgust; and a famous pro jeered at me for being uptight, repressed, and ‘over-reacting.” If this is ‘normal’ entertainment for an adult audience of sf readers… if my protest is ‘wrong’… then the fandom I love is pretty sick.”

Yet Westercon 30 (held in Vancouver July 1-4, 1977) was a major watershed for Susan and her efforts to get fandom to grow up from its juvenile past.

“…with the help of the chair, Fran Skene, and programmer Allyn Cadogan, I organized some ‘alternate programming’ – alternatives to the usual four-male-scientists-building-a-world, or four-male-pros-bragging. First, a lounge, A Room of Our Own…” 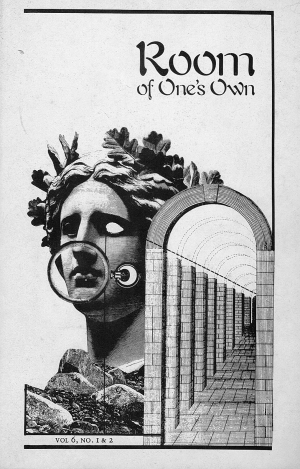 “A ROOM OF OUR OWN is intended as a gathering place and informal function space for all interested in discussing questions of feminism, sexism, sex-role stereotyping and related concerns (and what we can do constructively to overcome stereotyping) within science fiction and fantasy literature and fandom. We hope that spontaneous discussions will occur.”

“Dennis Howard discusses his feminism and anti-sexist magazine, WOMEN AND MEN, Chelsea Quinn Yarbro discusses MARKET CONDITIONS FOR WOMEN WRITERS — WHAT TO EXPECT AND WHAT TO DO ABOUT IT; Jessica Amanda Salmonson moderates the panel ALTERNATIVE TO PATRIARCHY: AN EXPLORATION OF CHARACTER AND CULTURE IN SF  with Terry Carr and others; Suzy McKee Charnas discusses her novels, and SF and mystery writer Liz Lynn discusses her CLASS ON FEMINISM AND SF.”

All went well, though Susan did later comment that A Room of Our Own wound up being “male dominated.” I suspect because much time was probably wasted explaining to males why what they assumed was normal and acceptable behaviour was in fact reprehensible from a woman’s viewpoint. In other words, before discussing how to prevent women from feeling alienated from fandom and SF, it was first necessary to explain why women were pissed off in the first place. It’s hard and tedious to discuss a problem with people who don’t believe the problem exists.

“So many people found A Room of Our Own at Westercon valuable that I really hope it becomes a permanent feature of larger conventions, a meeting place in the crowds… a lounge open to all members for serious discussions; not the bar, not the Dungeons and Dragons room, not a place to bullshit or get drunk… but a lounge to talk in…”

A GLIMPSE OF HER FANNISH WRITING

“AMOR #10  is actually the twelfth issue of my small, frequent, informal letter substitute… available only for editorial whim…the mailing list is finite…tell your friends that I … can’t send them my fanzine because I don’t really publish one. This-is-the-letter-that-grew. Merde alors, did it ever, this time…”

The loc column is hefty, and includes a letter from Ursula K. LeGuin who writes, referring to the difficulty of pleasing critics:

“…It’s exactly the same in the woman’s movement. In room A I am a ranting bitchy libber and in room B I am a cop-out married mother of three who cooks, which is even worse than having mostly male protagonists. Somewhere, however, I believe there is a room C. I guess Virginia Woolf knew of it; she called it a room of one’s own.”

Aha! Was this loc the inspiration for calling the feminist programming at Westercon 30 the following year “A Room of One’s Own”? Now I understand what it means.

Susan’s section is titled simply ‘Susan’s Section’. This issue it consisted mostly of personal musings about the setting in which she lives:

“One of the reasons there hasn’t been an AMOR for six months is that I have been looking at mountains… When I walk to the end of the block, I can look north and see, cloud-capped, snow-capped, the peaks of the coast range…On these clear days, the mountains rise, high and majestic, blue into the northern distance… Some days, the mountains are mysterious. The air is moist and misty, the light delicate, the mountains faintly outlined in pastels against the sky: Japanese watercolours, brushstroke suggestions of peaks. Often, clouds trail like banners from the sharp peaks – or the fog, rolling off the water, boils around their bases so that they seem to be floating in the sky in improbable balance.” 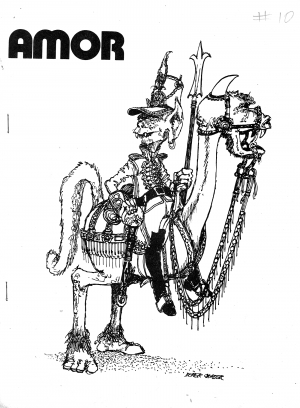 Susan then describes how, in a fit of depression marking student papers ( were they that bad? ), she abandoned them and went off to see:

“The Haida and Kwakiutl totem poles, and two grave houses… left to themselves in a cedar grove. The sun filtered through green branches onto moss-covered stumps and ferns, small pink-white daisies, carved and mysterious cedar. The raven crowning one pole floated, grinning, above the wind-tossed trees; whiskeyjacks called from the branches. The wind smelled of growing things, promising spring even in mid-winter.”

These two descriptions are wonderfully evocative and convince me Susan could have been a successful fiction author had she made the attempt.

(The totem poles described above were later transferred from their beautiful, ‘hidden’ setting and plunked down behind the ‘new’ anthropology museum. Pity.)

Later Susan muses, much to her horror perhaps, that she is an academic, and defends herself:

“One of these (my) classes, though, is U.B.C.’s first credit class in sf. Thus VCON, which was fun but tiring, and Worldcon, for which I am organizing a panel on women and sf, are ‘scholarly conferences.’ Genuinely – if only because they will be reminders to me that I am a fan first, and an academic very much second: not, I hope, one of those Bug Eyed Monsters Evil Rotten Academics who, folk wisdom saith, are out to make sf Dull and Boring.)”

According to Stan G. Hyde, a former student of hers ( and now a respected recently-retired teacher and an even more respected authority on Godzilla) she was anything but, namely a highly inspirational and a hugely positive influence on all who took her classes. For example, she introduced her student William Gibson to Editor Terry Carr, which led to the Ace special edition of Neuromancer and the evolution of a major SF literary career.

I myself saw her at a few panels at early VCONs, but never actually met or knew her. I can confirm that all who did value their contact with her and miss her to this day. She was one of the legendary Canadian fans of the twentieth century and certainly one of the most influential.

I conclude with a story Susan told to Province Newspaper reporter Chuck Davis about her Torcon 2 interview with a Toronto reporter who had made it very clear he was NOT a fan of SF literature:

“”There I was, telling this guy that science fiction was a very serious branch of literature and deserved serious consideration, when I suddenly remembered I was wearing a beanie on my head with a little propeller on it. And the propeller was turning. Very slowly turning.”