In my last article we covered the alternate history’s slow development from idle speculation by historians, to the first counterfactuals and what could have been the very first novel. The remainder of the 19th century, however, would include several other major milestones in the sub-genre’s history that we need to take a look at.

Louis Geoffroy is remembered now primarily for his contributions to alternate history, primarily the novel Napoléon et la conquête du monde, 1812-1823: histoire de la monarchie universelle. It was original published in 1831 and depending on where you fall on Alroy, this is the first novel length alternate history work. In it Napoleon defeats Russia and goes on to conquer the world. Geoffroy even discusses some of the changes in arts and science to his new timeline and even spends a moment discussing what would have happened if Napoleon had lost (making this novel the first use of the double blind what if).

More importantly, this was the first time we saw a single what if (in this case a victorious Napoleon) become popular among writers. Following Geoffroy’s novel, we see several other works discussing the topic including Joseph Mery‘s “Histoire de ce qui n’est pas arrivé” (1854) and Edmund Lawrence’s It May Happen Yet: A Tale of Bonaparte’s Invasion of England (1899). Having just wrapped in 1815, the Napoleonic Wars were a traumatic experience at the time so it is not surprising that writers would be inspired to write about a world where the wars went differently.

And since we are talking about the French, we should mention Charles Bernard Renouvier who coined the phrase “Uchronia” in his 1876 novel Uchronie. The term is often used an alternative name for alternate histories or what ifs and is the name used by the largest bibliography of alternate history literature.

Nathaniel Hawthorne and Other Americans 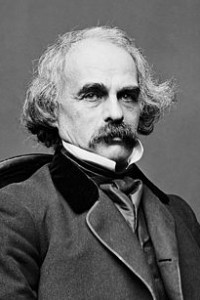 Other American alternate histories include historian and minister Edward Everett Hale‘s short story “Hands Off” (1881) which is unique for not only for being an alternate “biblical” history (Joseph is not sold into slavery), but for featuring a narrator who travels back in time to create an alternate timeline. Later we would see Aristopia (1895) by Castello Holford (who like Geoffroy is only known for his alternate history work) where the first settlers to Virginia discover a reef of pure gold and build a utopian colony that conquers North America. Regrettably, Holford does not get the award for the first alternate history wank, that goes to Nilo Maria Fabra’s “Cuatro siglos de buen gobierno” (1885) featuring Spain as a world power and on the verge of colonizing Mars.

Napoleonic alternate histories remain popular (especially in France), but as history marched on, new points of divergence would be recorded and new countries added their own literature to the genre, including the United States. By the start of the Twentieth Century, alternate history would mature and become less a play thing of historians and more of a genre of speculative fiction.