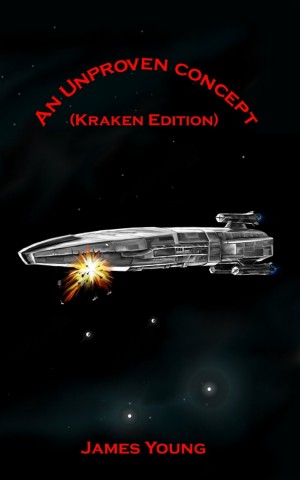 Due to a mishap I had to get a second copy of this novel, only to find in my search that there was another book with the exact title and one that had a similar cover, which could easily prove confusing for readers looking to purchase it.

First impressions count and it’s well known that the cover that sells the book. This one bears a cover that has a startling similarity to the Battlestar Galactica ( as does the other one) with a few extra bits added – which fans of the TV series are bound to pick up on. The book is filled with action yet, while very well written, for me there were a few niggles. For instance, the crew of the battle cruiser Constitution find themselves pushed into their seats during acceleration, why? There’s no gravity in space and even if the ship has its own inbuilt gravity field this wouldn’t happen. The next thing was Captain Herrod waking up and not realising his legs were broken until he tried to push off from a bulkhead in null gravity, whereas I’m pretty sure he’d have probably noticed beforehand. Additionally he has crew members of these future star ships speaking archaic sailing expressions such as ‘Aye, aye, all astern full!’ and ‘heave to.’ While these things give readers pause, I began to find myself drawn more deeply into the novel and to appreciate how cleverly it has been written.

James really hits his stride with the crew of the space liner Titanic wearing period clothing of the original ship of the name. This nice touch helps bring the splendour of the ancient ocean liners of Earth into the space lanes of the future. Doctor Who enthusiasts may quickly point out that this is similar to the episode Voyage of the Damned, in which the Tardis crashes in to a spaceship named RMS Titanic. But, that aside, this is a memorable and enjoyable read. Young’s character conflict, descriptive skills and vision make this an admirable book that a great many readers will love.

As yet another superstorm bears down on a desperate, weary city in the year 2040, a young woman seeks to redeem her winning sweepstakes ticket for a better life in a low Earth orbit paradise.

The Nine Billion Names of God by Arthur C. Clarke