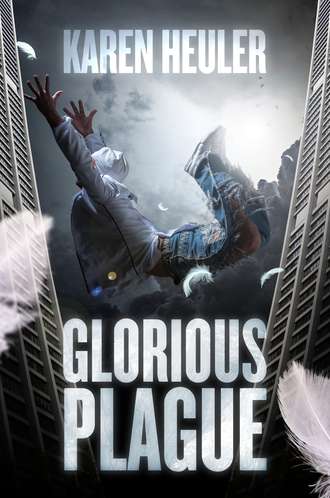 The world had gotten religion.

In a world where most have been touched by glory and are now climbing to the highest point they can and singing their heart out, most people die of dehydration or starvation. Those that aren’t pushed off their perches to crash to the ground.

Dale is a crop specialist in New Jersey, spending her time taking samples of crops and animal feed to assure there are no adverse chemicals. When the “plague” starts she heads off for Manhattan to check on her daughter. By the time she gets there, the island is a mass of dead bodies and her daughter’s apartment is empty. Dale walks around, the only efficient manner of transportation with cars stalled in the middle of most streets, blocking traffic, and tries to locate her daughter, without success. In the course of her searches, she contacts an entomologist with a sample of dead bugs she found at the top of plant stalks in a field in New Jersey. She suspects there may be a connection with the humans climbing to the tops of buildings to die. Dale and Otto, the entomologist, become the focus of the book from then on, as they look for a source and possibly a cure for the strange plague that had killed off most of the people in the world, as far as they can tell from Manhattan.

The novel is a frustrating mix of very good writing and a plot that goes nowhere. Heuler obviously knows her craft, with excellent descriptions of places and people and well written scenes of interactions as small cliques try to build a life from a world collapsed around them. But once she introduces the idea that people climb up to sing and die, she takes it into a weird mesh of interactions that leave you wanting much more. In addition, there are several potentially interesting characters who make an appearance, only to disappear into oblivion and are never heard from again, or show up later as spear carriers, dead corpses who are worthy of only a moment’s mention as Dale and Otto drift by in their search for an organized life and Dale’s daughter. We also never really know what happened to Dale’s daughter, although the implications of where she’s headed in her final scene, early in the book, are obvious.

There is little conflict, if you excuse the effective end of the world as we know it. People try to get organized and there is an obvious trend of people trying to be something else, to change their lives from what they were to something they now want them to be, with limited success as resources begin to run out. There is building potential of one man’s attempt to take over Manhattan, but the book ends before we see any type of climax. If this is meant to be the beginning of a potential series, there is little set up for what is to come. Even Otto’s discovery of a potential parasite which may have caused the plague is treated in a much too calm manner. And the introduction of angels and mermaids is treated as a passing aberration with no real substance.

As end of the world stories go, this one ends with a Middle C, not a bang, and dies off into a sussurrus of blowing detritus on empty streets.